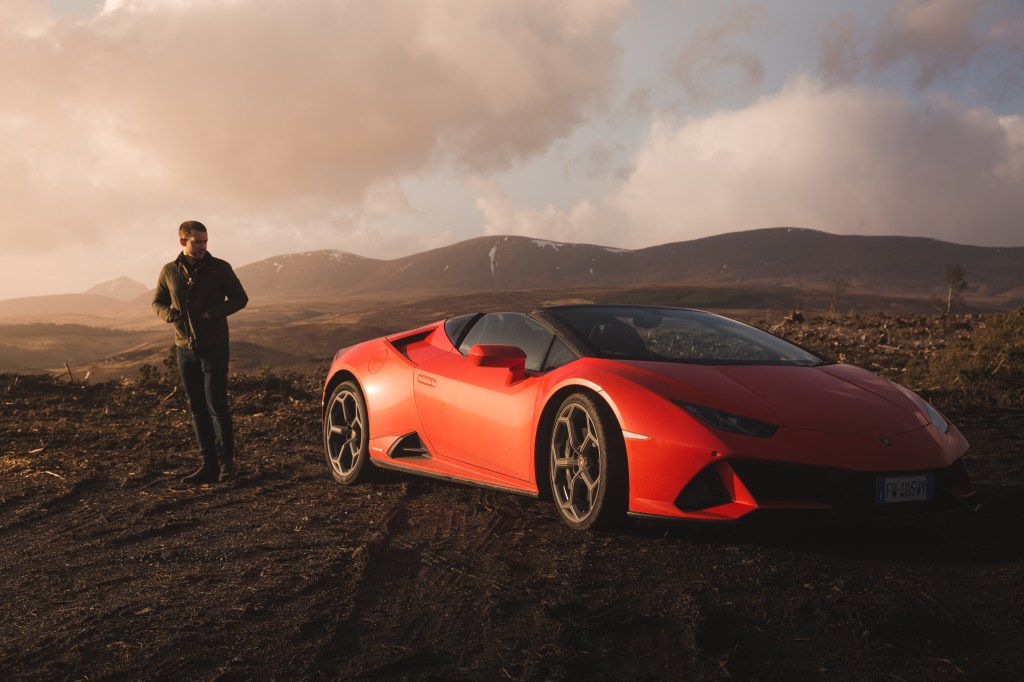 We opened our curtains on Morning Two to beaming Scottish sunshine and by the time we’d finished our breakfast it’d started raining. Classic. Collecting the Huracan from the Manager’s parking space (I felt he wouldn’t mind), I rip-roared away – reminding myself of that heady exhaust note and inhaling the noise like an addict.

At a nearby Nuclear Power Station we were stopped and briefly interrogated by heavily armed guards – we pleaded ignorance as to its nuclear status and were packed off on our way but not before the officer advised me to enjoy the Lambo on the surrounding country roads: “Within the speed limit of course” I proffered, to which he scoffed and insisted that there “weren’t any police up here and we couldn’t catch you if we tried”. He declined to give me that in writing. We left glad they didn’t confiscate our cameras and resisted stopping at the adjacent submarine base, which they strictly advised us to steer clear of. 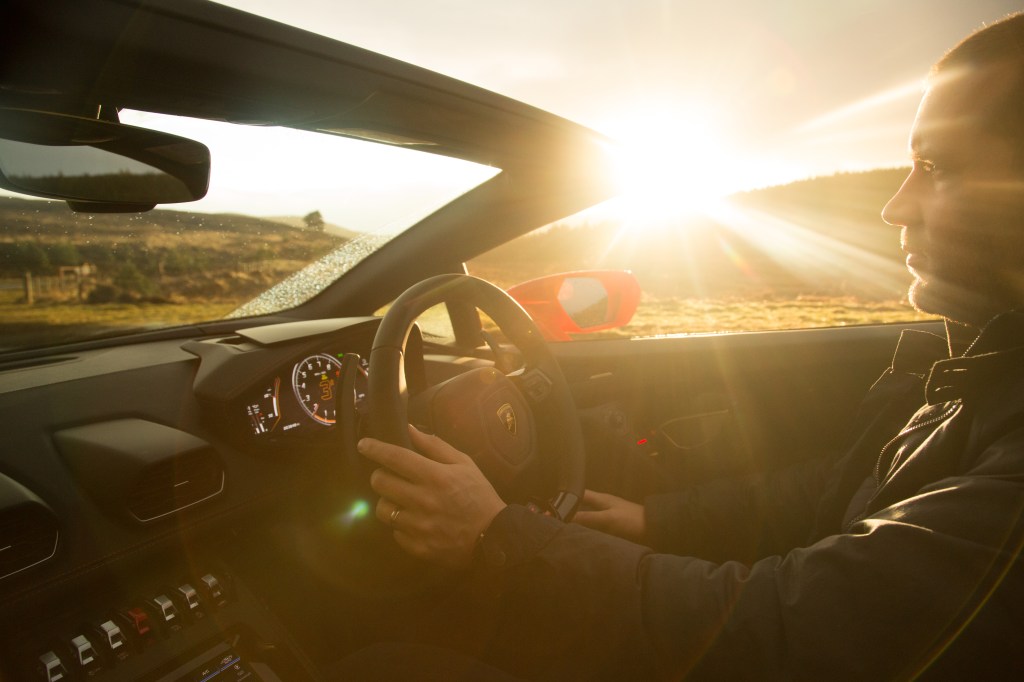 One of the most striking things about the Scottish Highlands is the variety of its landscapes: you can transition between green fields, rocky heathland and snowy mountains in a simple fork in the road. The problem we found with this was that five minutes after every pit stop, we received another “Land Rover 1 to Lamborghini 1” (walkie-talkies were a godsend and a lot of fun) asking us to pull over as the photographers had spotted ‘THE shot’. It turned out that, ironically, there were about 15 ‘THE shots’.

Lunch on day two was at the Old School House, a quirky little spot offering hearty fare and a chef who apologised for almost our entire lunch for confusing veggie chilli with beef chilli. Although perturbed, slipping back into the Lambo’s arcade game of a cockpit instantly drowned out any culinary disappointment. 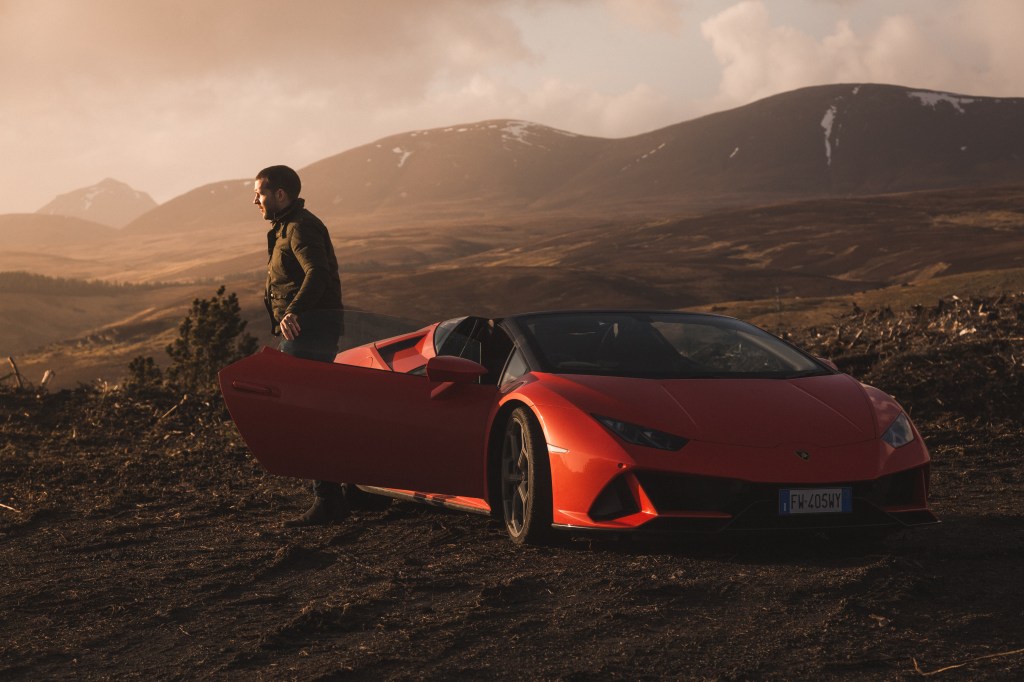 As we travelled along the top of the British Isles through places with characterful names like Tongue and Hope, we started to see the landscape evolve as though slowly entering the mind of JRR Tolkien. The peaks got bigger, the Lochs wider and the roads curvier. Sensing an opportunity, I whacked the EVO back into Sport mode and tapped into the car’s natural agility, poised chassis and four-wheel steering.

Although to look at it is a rugged place, the roads up here are actually far more Brands Hatch than Braveheart. After whipping through a torrential blizzard that seemed to arrive from nowhere, and along slippery, snow-covered tracks, we reached our second night’s accommodation: The Green Cruachan, a tiny, cosy bed and breakfast that felt like it was perched at the end of the world. 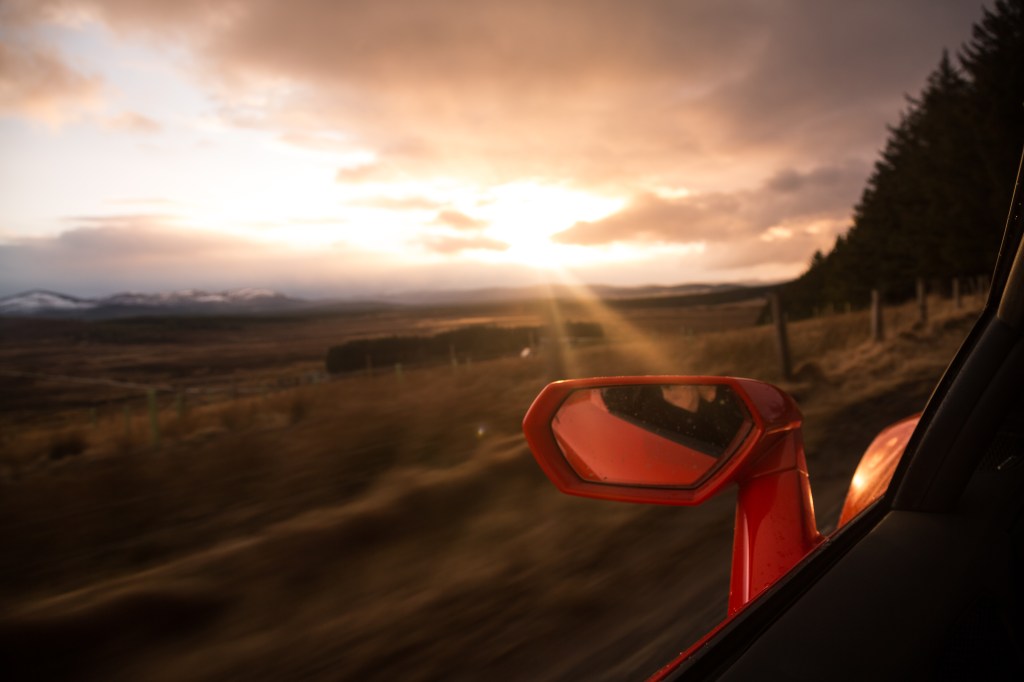 Day Three was a big day for us: we were right in the thick of the iconic, insta-famous vistas of the Highlands. As is often the case with trips like these, the route you don’t intend to take always leads to the most extraordinary revelations. Heading back towards Drumbeg (the wrong direction), we came across some of the most spectacular scenery on the NC500. (Map-reading advice: if you see a wiggly line that seems to trace a coast or a Loch, go there. It’ll only ever be a good idea.) A quick, and delicious, pie stop in Lochinver and we began the descent towards The Torridon – a classy hunting lodge. As ever, taking the long way around sent us firmly into what felt like the Swiss Alps – suddenly it was a total white out, nothing but snow from ground to horizon. An impressive collection of deer is all that broke the whiteness – well, except for the bright orange supercar roaring past, smug about its four-wheel drive and traction control. 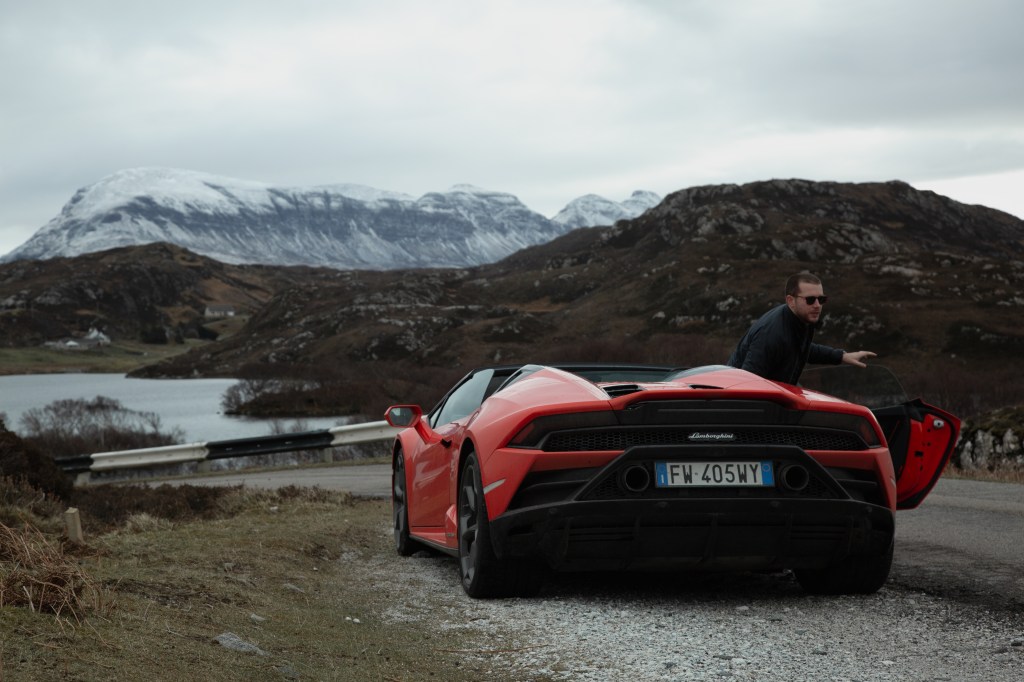 After descending from Val D’Isere we found our way to the hotel, which was nestled on the side of a Loch, and was imbued with aristocratic grandeur and a log fire to welcome us. A hearty dinner and a few drinks later we were all, as usual, exhausted from the days adventure and adjourned to the inviting rooms with the promise that we’d all get up for sunrise.

As expected, our alarms came and went. However, we still managed to take in what is surely, one of the best hotel views in the UK. Over breakfast we found out that Chris was so enamoured with the view from his room that he climbed out of his window at 6:30am to capture it. He seemed to be under the impression he had been locked in the hotel – I think the previous night’s Old Fashioneds may have clouded his judgement. Still, he had to get ‘THE shot’. 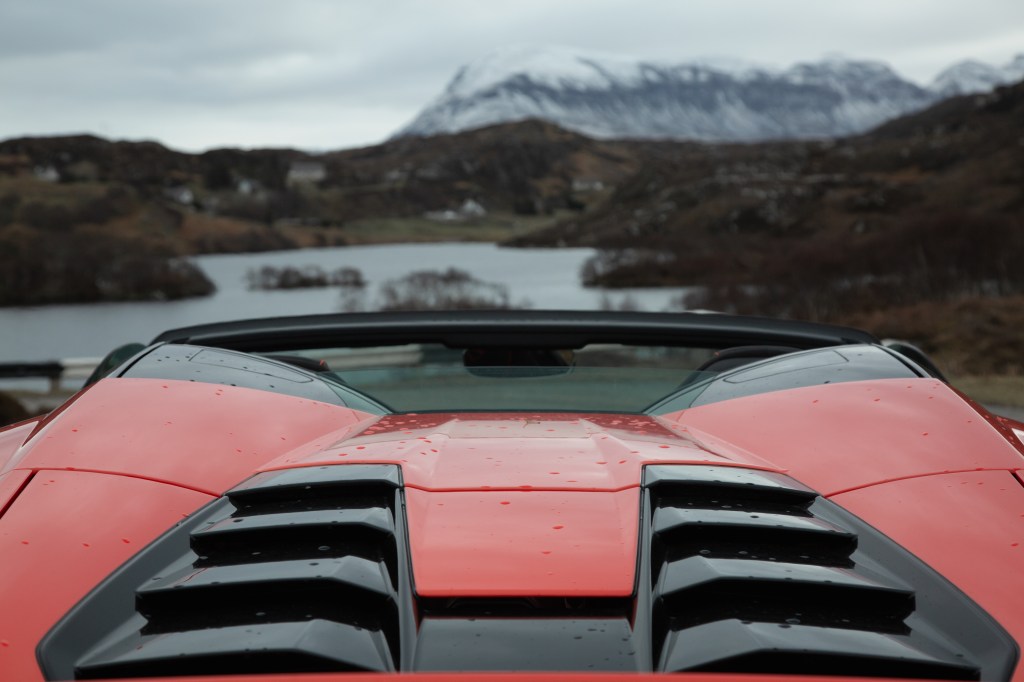 The most famous part of the NC500 is Applecross and the road Bealach na Bà which approaches it. We were convinced, at this point, we’d be hard to impress but after a delightful lunch stop at the Applecross Walled Garden Café, we tackled the famous road. The fact that there’s a gate at the beginning with warnings of the road being ‘impassable at certain times of the year’ didn’t intimidate me – the Huracan had so far proved its prodigious V10 could conquer any terrain. This famous spot didn’t disappoint to be honest – it was just another example of the Highlands’ endless spectacles.

After finally speeding off out of the valley, Tristan (now riding shotgun with me) turned to me and said, “It just keeps on giving doesn’t it”, to which I responded: “Yeah, I mean with over 600 horsepower and this much torque, it will do that.”

Tristan cut in: “I meant Scotland.”

He was right of course. Hunkered down in the Italian thoroughbred we’d often get radio calls from the others asking, “Are you guys going so slowly for our benefit?” We weren’t – and we just couldn’t stop looking out the window. 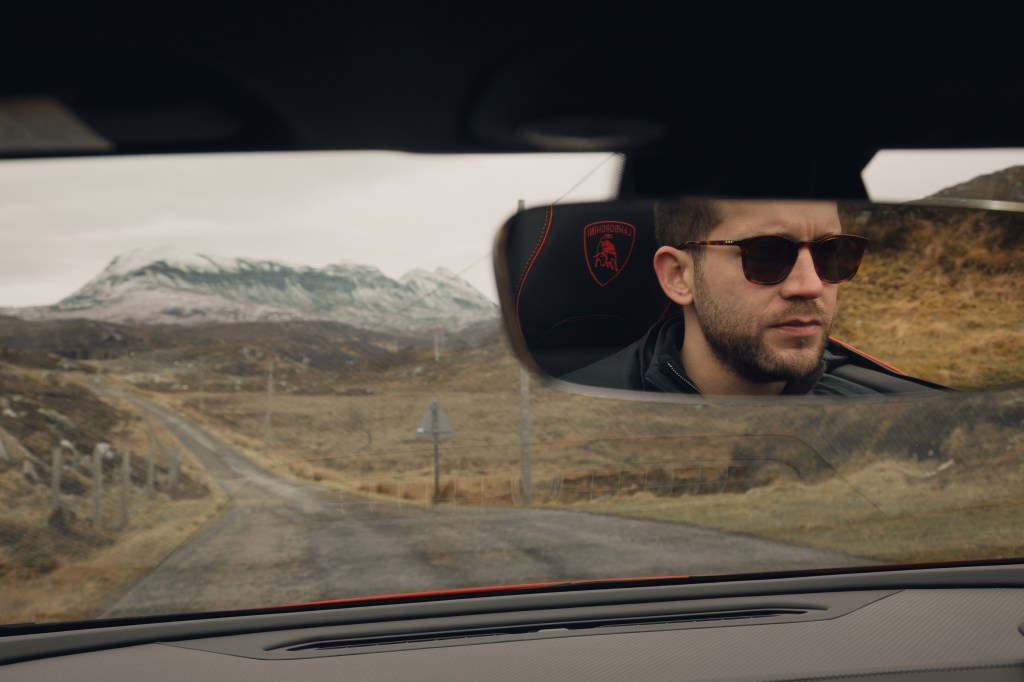 Our automotive collective spent its final night together in some idyllic lodges by Loch Ness, where we polished off what was left of our whisky collection whilst our two trusty steeds stood guard outside wearing their mud like badges of honour. We parted ways the next morning for the Land Rover to return to its Inverness home and Michael and I to make our final descent back to the Lamborghini dealership.

A thrilling final few squeezes of my right foot and we arrived back in Edinburgh to be treated to the wonderful hospitality of The Balmoral. With the Lamborghini looking thoroughly at home parked outside the five-star hotel we feasted like kings in the Balmoral’s wonderful restaurant and drank heartily from the limitless whisky bar as we relived what had been an epic adventure. In hindsight I think we knew it may be the last time for a while we could do it so freely. 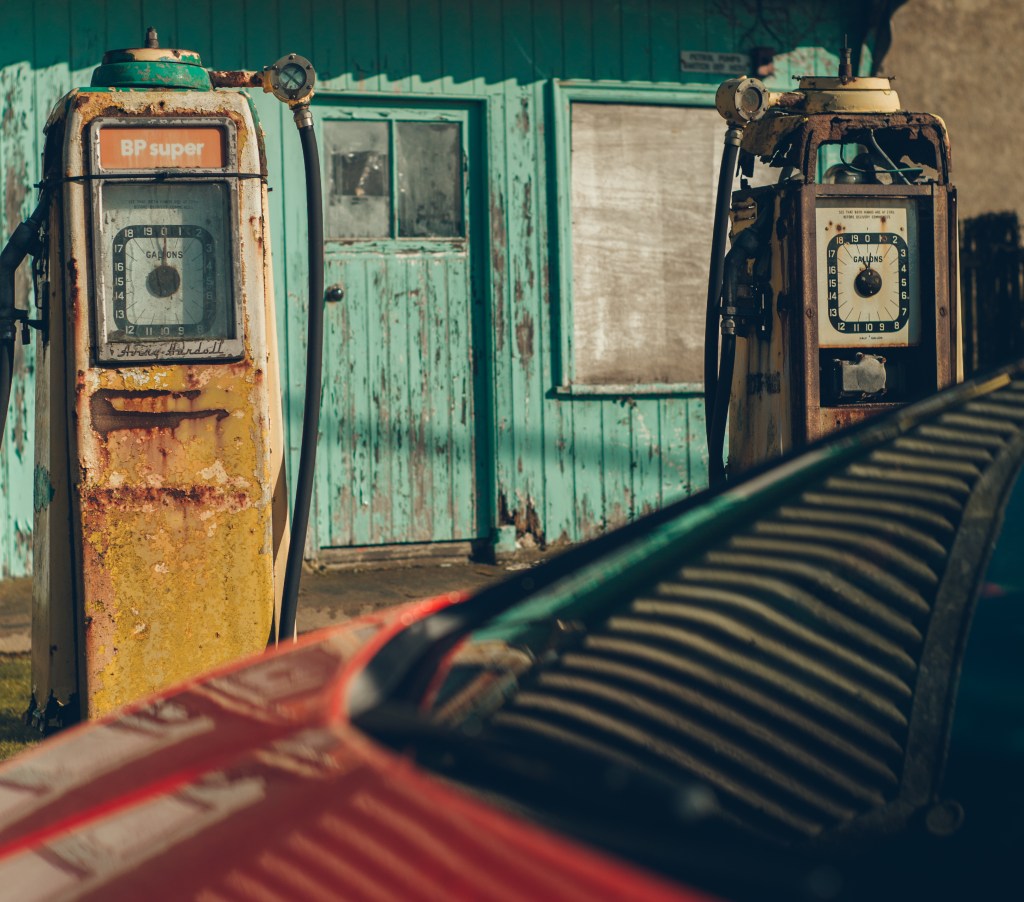 I now reflect back on this trip with a different perspective, now that we all find ourselves in the grip of a global pandemic trapping us in some form of lockdown and unable to see friends or family. We have taken for granted the ease with which we can explore the world around us, whether over a few hours away or a few days. As I flick through the extraordinary images from this trip and remember the fun we had together, it encourages me to make the most of such opportunities in the future, as who knows when suddenly the idea of checking into a hotel or stopping off for a pub lunch may seem like a strange mythical fiction.

All photographs by Michael Shelford

WITH SPECIAL THANKS TO