One of the reasons some, no, many people can’t abide Elon Musk is that he seems to be having it all his own way, no matter how many missteps he takes. Calling someone a “pedo guy” on Twitter, ballsing up (literally) a car launch, giving his child a name that won’t make it through kindergarten unscathed – none of this seems to matter. Not to his fans, not to his investors. In fact, they love him more for it. Tesla, the PayPal founder’s electric car company, is now the world’s most highly valued carmaker, with a market cap currently hovering around $280bn, $100bn more than its nearest competitor by value, Toyota.

For those people, then, some news: Mr Musk, and Tesla in particular, might not have it all its own way for much longer, because emerging out of the Scandinavian fimmel is Volvo’s electric offshoot Polestar, a bona fide Tesla rival. Polestar, for the uninitiated, announced itself three years ago with the Polestar 1, a two-door coupé with a hybrid engine that produces more than 600bhp. Deliveries only began last year against a run limited to 500 cars a year for three years, with a starting-from tag of £139,000. But it was always made clear this outlier was just the prelude to the main event. 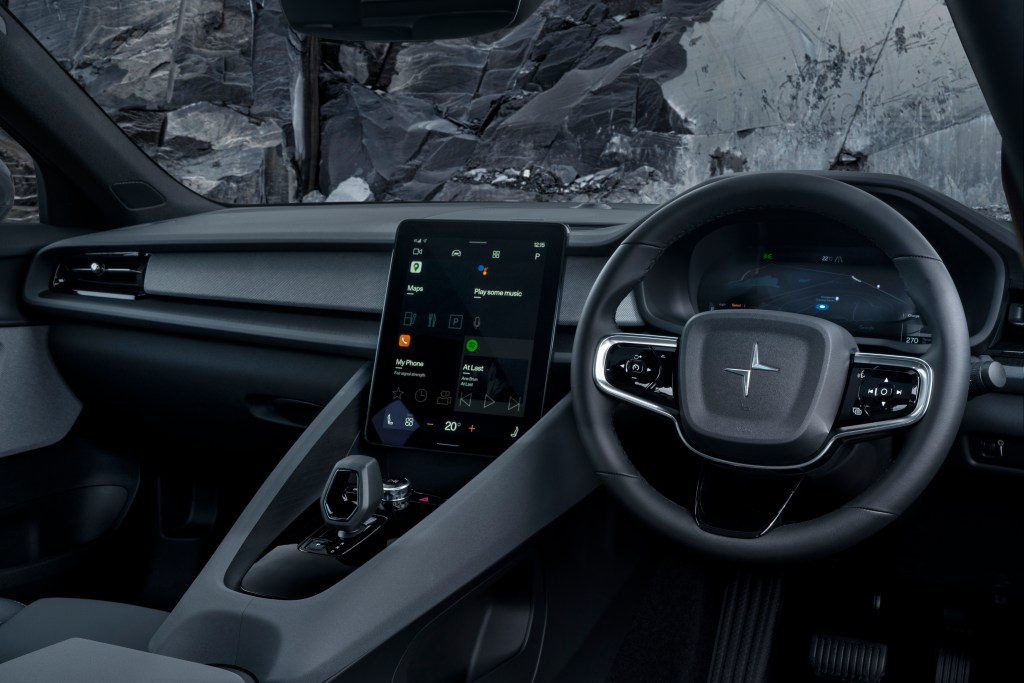 Which is now on. This month, Polestar parked its much-anticipated Polestar 2 on Tesla’s lawn, and opened fire. It says by 2022, it wants to be shifting 100,000 of its new car every year. That’s some way short of the 367,500 Tesla says it sold in 2019, but still, ambitious from a standing start.

To the car, then. These are the headlines. Dubbed by its creators an “electric performance fastback”, the Polestar 2 is a five-door, fully-electric hatchback with a range of around 290 miles and a blistering 0-62mph of 4.7 seconds. Top speed is 127mph, and it’s available from £46,900, once the government plug-in grant has kicked in. Earlier this week, I spent 24 hours with it, and the one-line review is that the Polestar 2 is really very, perhaps even very, very good.

Why? Well, let’s first consider the context. In the real world, drivers spending this kind of money on a car – circa £50,000 – want something they can enjoy driving, without compromising on boot space, or, in the case of the red-blooded male driver, impressions of how well-proportioned they are. Which means their choice of car is measured against performance, practicality and how damned sexy the thing looks. With a few exceptions – basically Tesla – that rarely means going electric.

Performance-wise, the Polestar 2 has a lot going for it. Besides being almost as quick off the line as a Porsche 911, it tickles the fancy with clever things like “one-pedal driving”, an increasingly common feature in electric cars whereby the car’s twin electric motors slow the car down as you lift off the accelerator, meaning you use the brakes far less. In the Polestar 2, turn ‘creep’ mode off, and with a little practice, you’ll be able to pull up and stop at a junction without going near the brake pedal. Odd at first, yes, and you can turn the system off so the car coasts as normal if you want, but even in 24 hours, I started to anticipate it.

Then there’s the minimalist interior and all its technical gubbins. Polestar has collaborated with Google and made the car the world’s first Google Assistant-enabled vehicle. So you can “Hey Google” such things as the cabin temperature, Spotify and navigation. A neat trick, sure, but the system’s no more perfect than any other Google device. It didn’t catch my every word, and there are things it won’t do that you might expect it to – wind down the windows or open the boot, for example. Although to be fair, Polestar says that’s a safety thing, to stop kids mucking about, and wags swagging the contents of your boot when you’re sitting at the lights, windows down.

All functions are also operable through a centrally mounted touchscreen tablet meant to leave us in no doubt that this is both a digital-first car, and designed expressly to feel like an extension of devices we use at home and at work. As such, the system felt refreshingly intuitive from the outset – Steve Jobs style, it just worked. And kudos to Polestar for turning to a leader in the voice-recognition field, rather than wasting everyone’s time and money on developing its own system. 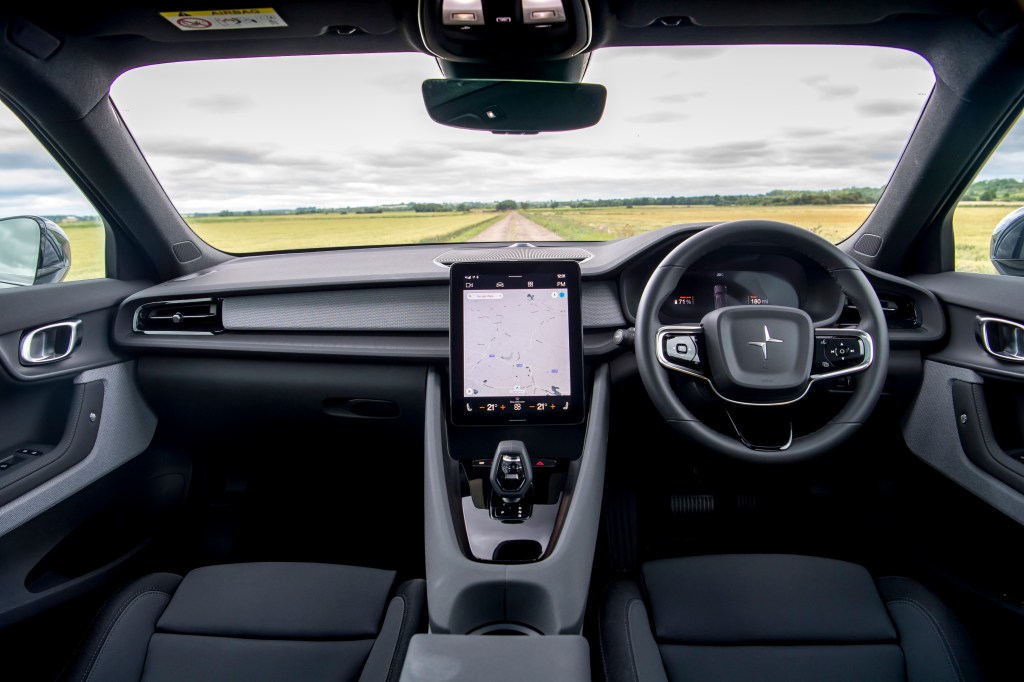 Practically, the Polestar 2 measures up, too. There are five seats and plenty of legroom in the rear, 440 litres of boot space by the time you take the (handy) hatchback and small ‘frunk’ into account, and because of its slightly raised profile, getting in and out of it is more SUV than coupé. And, this being a Swedish car with Volvo’s premium standards running through its veins, the build quality, materials and level of finish are mostly unimpeachable, too – although the plastics chosen for the steering wheel centre cover and buttons were, frankly, a disappointment.

On paper, then, so far, so good. The Polestar 2 is fast and fun to drive, with the practicality of a family car, and if you don’t hammer it, you might get to the magic 300-mile mark on a single charge. It’s even got a moral compass – besides not kicking out any CO2 on the road, the black cloth interior on my loaner was ‘vegan’ and the company swears it’s working with nice farmers on the leather option.

But would you want to park one outside your house? This is what the jury will debate longest. Of course, the debate isn’t limited to the Polestar 2. As a rule, electric cars aren’t as pretty as their ICE counterparts. Tesla’s Model 3, Polestar 2’s nearest rival, has a distinctly gormless gait, while from Nissan’s pioneering Leaf to Kia’s spirit-crushingly awful e-Soul, there’s little to tempt design obsessives. Jaguar’s i-Pace still disappoints visually, and Audi’s similarly pricey e-tron should have been put in the Q8 body.

By those benchmarks, and even though it can’t be described as pretty, the Polestar 2 isn’t going to be the last girl to get asked to the dance. It looks plenty aggressive, with 19-inch rims as standard, flared wheel arches, tyres that poke out menacingly from the car’s boxy silhouette, and a squat stance that owes something to American muscle cars. 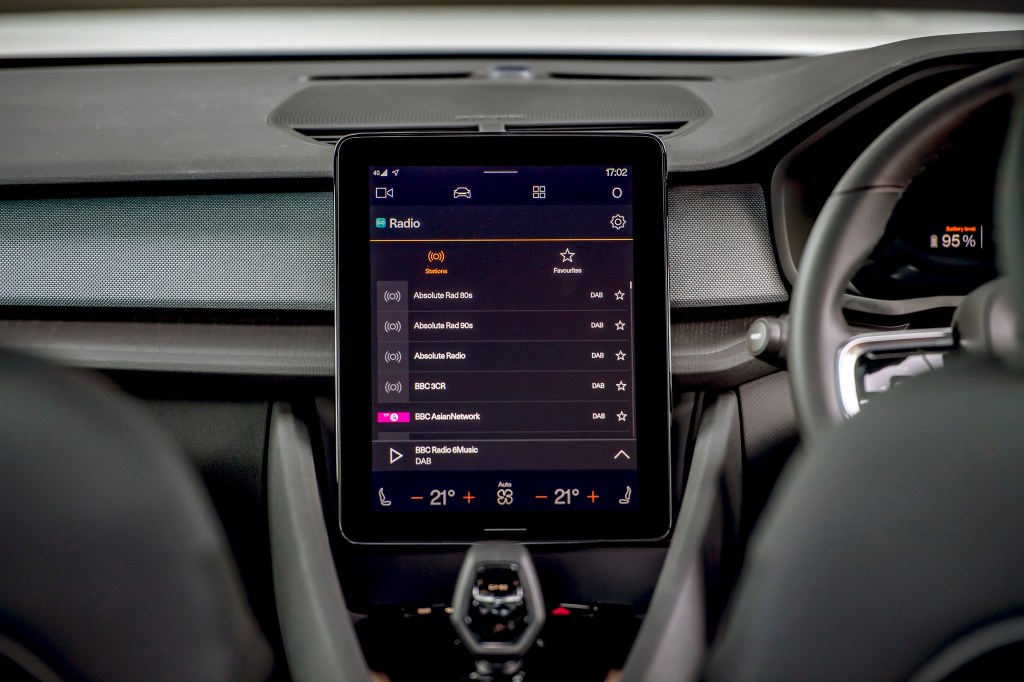 But the shutlines gape a touch and flow awkwardly, the C-pillar feels crunched in the wrong places and the front-end detailing is overwrought. It wouldn’t hurt to look a little more Volvo, but then I get there’s a burden on designers to bring the forward-thinking of the nuts and bolts of a class-leading electric car to the design – and I might just not be ready for it.

Or maybe I am. Because the Polestar 2 has left an indelibly positive mark. Even the standard spec list is a best-of showreel: included are a panoramic roof, 360-degree surround view camera, heated front and rear seats and a booming 13-speaker Harman Kardon sound system. And although this will bother some, it’s not autonomous, which if you like to drive will be a plus not a minus.

Add all this to the fact it’ll cost around a fiver to charge up and in as little as 40 minutes, and you have a genuine rival to everything from the top-spec Tesla Model Y (expected in the UK in 2022 and to be priced about the same), to a BMW 3-Series. The latter comparison is deliberate – the Polestar 2 is the kind of car that could turn the trickle of petrolheads who’ve already been lured away from their internal combustion engines into a steady flow.

Does that mean the Polestar 2 will end the Musk monopoly? No, no chance. But it is the bright star in the sky the electric market has been searching for.