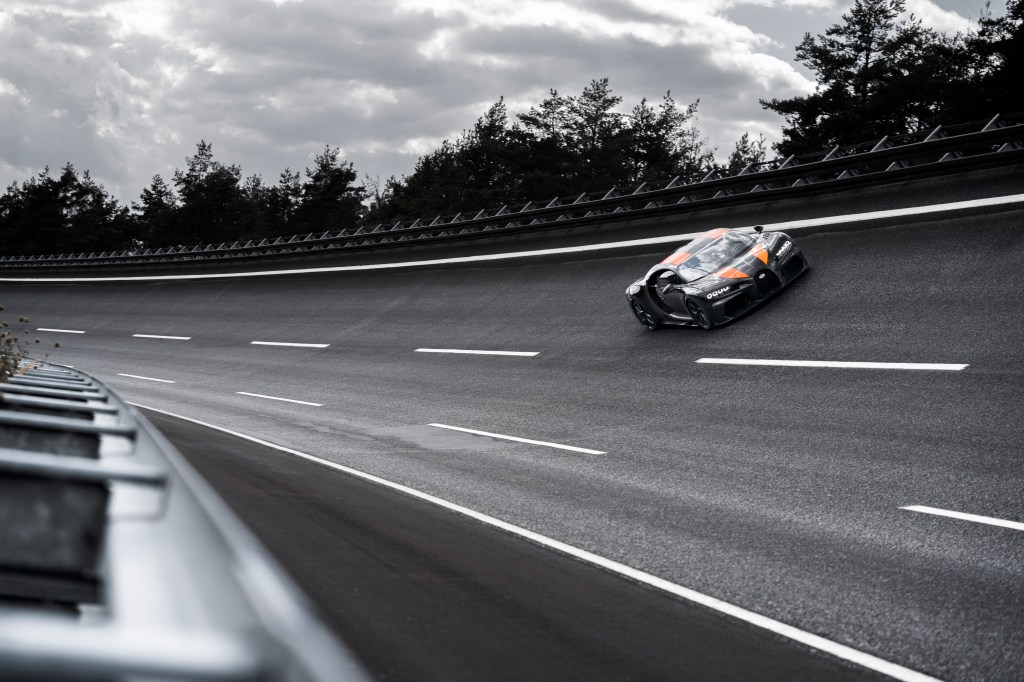 Building a road-legal car that can travel at over 300mph is an utterly pointless thing to do. No owner will travel at anything like such speeds, not least as doing so requires the use of a test track, an engineering support team and the resources to X-Ray tyres before they are fitted to the car. But as the man who drove the Bugatti Chiron to its production car record speed, Andy Wallace, says: “It’s still a pretty bloody cool thing to do.”

Ever since the Chiron was launched with a 261mph speed limiter, the big question has been how fast it would go if let of the leash, and whether Bugatti would ever permit it to happen. Company boss Stefan Winkelmann has previously spoken about wanting to move beyond pure speed, but allowed an attempt to be made to set a final record. This wasn’t easy: maxing the Chiron required the use of Volkswagen Group’s vast Ehra-Lessien test facility in Germany, with an 5.5-mile straight that is the longest of any test track in the world. It also meant modifying the Chiron slightly, with revised aerodynamics, a higher top gear and a power increase, the 8-litre quad-turbocharged W16 engine being turned up to make 1600hp, 100hp more than the regular Chiron. Then there was the small matter of finding somebody mad enough to sit in the hot seat.

Andy Wallace is almost uniquely well qualified for this kind of thing. The affable 58-year old from Oxford enjoyed a long career in top-flight sportscar racing, including victory at the 1988 Le Mans 24 Hours, and now works as Bugatti’s factory test pilot. (If you buy a Chiron, Andy is the man who introduces you to it, shows you what it can do and helps to bond your phone to the Bluetooth.) But he has also set two previous production car records, having driven the Jaguar XJ220 to 217mph in 1992 and the McLaren F1 to 240mph in 1998.

Three hundred mph, though, is on a completely different level. The car was set-up to have zero net downforce, but as Wallace says, there was still “close to 2000kg on the top surface of the body trying to pick the car off the ground, and another 2000kg under it pulling it back down. Two fighting forces that come to four tonnes roughly.”

Michelin built special Pilot Cup 2 tyres to withstand the huge forces involved in rotating more than 4000 times a minute, with each one being X-Rayed to make sure they were free from tiny imperfections. Wallace still needed to deal with huge gyroscopic forces: “It’s like the spinning top you had as a kid,” he says. “Once it starts to move it wants to carry on.” Even gentle crosswinds having a noticeable effect on the vehicle’s course – this, while covering 136 metres each second (a football pitch is around 120 metres long).

More surprisingly, Wallace discovered that the track at Ehra-Lessien wasn’t as immaculate as it looked. A transition between two surfaces on the main straight, which would barely be felt in a normal car at 150mph, became serious enough at nearly twice that to be dubbed ‘the jump’. Building the confidence necessary to keep accelerating over this took several days, and for a while the top recorded speed was a tantalisingly close 299.8mph. Wallace’s final run raised that to 304.773mph: the Chiron was still accelerating, but he needed to slow down to the 125 mph maximum speed of the heavily banked south turn.

Others may go faster. Both Koenigsegg and American outfit Hennessey have been chasing 300mph, with the Swedish hypercar maker having managed a hugely impressive 278mph on a closed public road in Nevada last year. But Bugatti has dropped the mic on its own record setting. “We have shown several times that we built the fastest cars in the world,” says Winkelmann. “In future we will focus on other areas.”

Wallace won’t put his record setting days are behind him – “never say never” – but admits that, for the week after setting the record, he drove “10 or 15mph under the speed limit everywhere – and it still felt quick.”