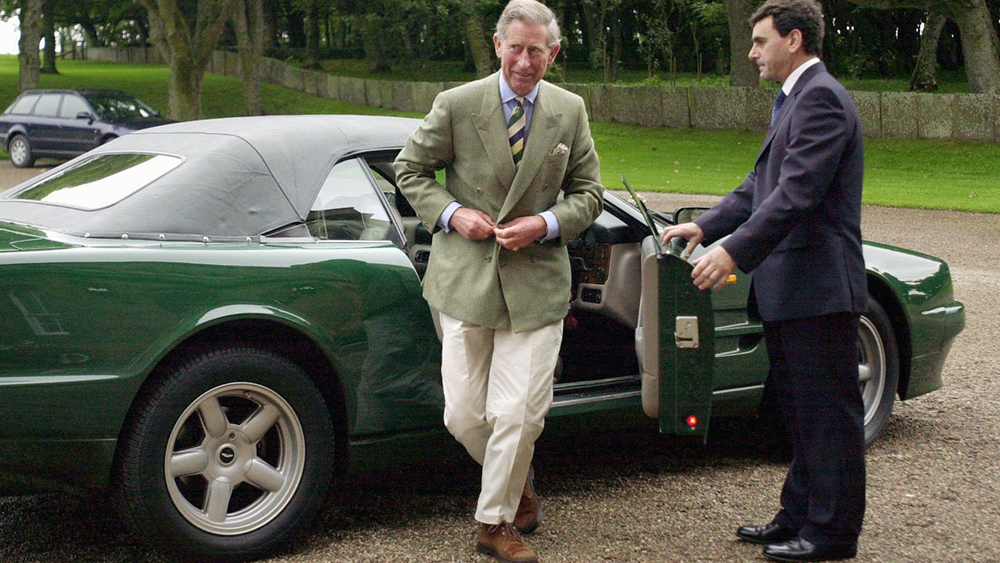 Between constant mentions in the news and the third season of The Crown, you’d be forgiven for having royals on the brain. There seems to be no subject matter that can’t be tied back to Buckingham Palace’s longtime residents and, apparently, cars are no exception. Prince Charles’ former Aston Martin will soon be going up for auction and it embodies his particular brand of princely style very well indeed.

In an agreement with terms the likes of which we’ll never see, the 1994 Virage Volante was leased to the Prince of Wales for nearly 15 years before being returned to the manufacturer in 2008 and put on display at the company headquarters. It is now going up for auction at Bonhams with a bidding price of £275,000, according to a new report from Tatler.

Having been a dedicated royal vehicle for some time, this model enjoyed its share of upgrades while in the Prince’s care. He had its original 5.2-litre v8 engine replaced with a 6.3 litre, meaning it can rocket up to an impressive 175 miles per hour. Fortunately for the new owner who may want to take it for a spin, its considerable horsepower was put to limited use and the car has racked up a mere 34,000. It was also outfitted with a police radio at one point, though that has since been removed.

The exterior is a handsome shade of forest green while the interior is upholstered with cream leather along the seats, wood-accented dashboard and interior side panels. Smooth leather even extends to a special compartment rumored to be where Prince Charles kept the sugar cubes for his polo ponies. Wouldn’t you require the same?

Prince Charles in the Aston Martin Virage Volante with Prince Harry and a royal nanny in 1998. David Hartley/Shutterstock

Aston Martin’s relationship with the Windsors extends back to the Duke of Edinburgh who first approached the brand in 1954 for a Lagonda he and the Queen would use as a private vehicle. Even Prince William and Kate left Buckingham Palace on their wedding day in one Prince Charles’ prized vintage models.

In a statement on the venerated automobile surely designed to entice buyers, Bonhams said, “This was owned from new by Aston Martin Lagonda and used by HRH the Prince of Wales until around 2008…with its unique specification and former Royal patronage, this beautiful Virage Volante is a ‘must have’ for the serious Aston Martin collector.’ The auction is set to be held on December 7th.