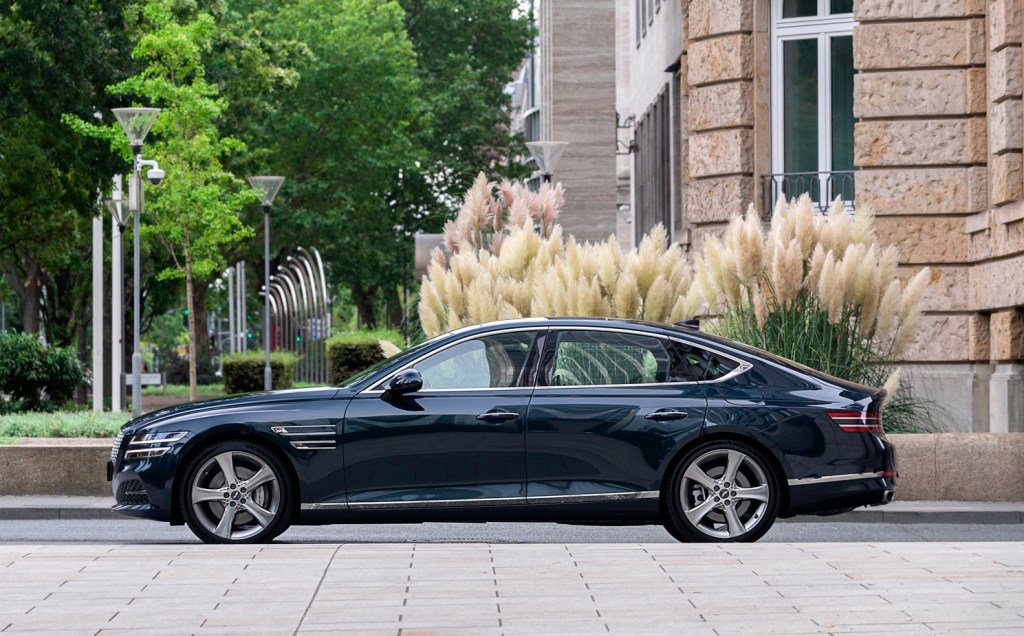 As anyone who’s driven an uncommon car on UK roads will attest, you don’t need to be behind the wheel of John Lennon’s psychedelic Rolls-Royce Phantom V or Bugatti’s one-of-the-kind La Voiture Noire to turn heads. A huge contingent of the British public knows their cars, and can spot something they’ve never seen before from 100 metres. Tour our little land-mass in a vehicle that’s not only rare but premium-rare, and you can expect plenty of appreciative nods from passers-by, over-the-bonnet banter in motorway services car parks and – if you happen to visit parents in the London-Essex overlap – the occasional hollering of “Nice wheels, Geez!” across busy thoroughfares.

And so it panned out when Robb Report took possession of the G80, the flagship model from Genesis Motors – Hyundai’s luxury spin-off marque (as Lexus is to Toyota), which launched in its native South Korea in late 2015, in the United States about a year later and finally in the UK and Europe last year.

The passer-by pundits offering their appreciation during our driving experience were clearly struck by the G80’s handsome appearance. Tasked with building a new car brand from scratch, Genesis’s Chief Creative Officer, Belgian automotive designer Luc Donckerwolke – who has reimagined the shapely forms of models from Lamborghini, Audi and Bentley (he can be credited for how the Bentley Continental GT and Bentayga look) in the past – came up, with the idea of future-proofing the brand in mind, with the term “athletic elegance”.

With the G80, he has surely succeeded. Stretching along its elongated profile (its wheelbase is a couple of inches longer than that of its obvious competitors, the Mercedes-Benz E-Class, BMW’s 5-series and Audi A6) the car’s sweeping lines, especially when light is bouncing off them, call to mind the swift, arcing strokes someone tasked with sketching it moving at rapid speed might commit to paper.

Two separate car park chin-strokers, drawn into conversation about the car’s appearance during Robb Report’s mission from Essex to some of the toffee-tin villages of the Cotswolds, mentioned the Aston Martin Lagonda, and were referring to its alluring profile as much as the winged badge on the front of the bonnet. Another observer suggested that the G80’s imperious, chrome mesh front grille could become a brand trademark one day, like that, inspired by Rome’s Pantheon temple, found on the front of Rolls-Royces. The split horizontal headlight bars and gaping air intake areas that flank the grille, as well as the twin exhausts echoing the grille’s shape, could also become trademark visual brand cues.

Make no mistake, the G80 is an elegantly distinctive beast. But elsewhere, are these Korean pioneers dangling a tasty enough carrot to entice those in the market for brand new sedans? Opt for the Luxury version and the interior (which benefits, space wise, from that aforementioned longer wheel-base) is arguably more S-Class than E-Class. Owners can expect natural wood and plush quilted leather, two-tone indicator tips, air-conditioning controls in the rear seat area and heated steering wheel.

Where it’s practical to do so – such as with the climate settings – Genesis have, after some extensive customer research, eschewed touch-screen controls in favour of physical buttons, which adds a nice dash of tactility to the driving experience. The standard 14.5-inch infotainment display, meanwhile, is intuitive. The graphics include a jaunty depiction of a track when opting for ‘sport’ mode over ‘comfort’ or ‘eco’, which has your right-foot twitching in anticipation of a nice stretch of clear Tarmac. There are plenty of other nice touches: the sun roof is immense, the second-row seats recline and you can immerse yourself and passengers in a gentle hue of your choice with the ambient lighting.

The driving experience, enhanced by plentiful responsiveness, impressive braking performance and poised, stable handling (the car’s low centre of gravity is a huge factor in the latter) is equal to any car in the all-wheel-drive G80’s ballpark. Those for whom performance is a serious priority will hope the 3.5-litre twin turbo version already available in the United States and Korea – which produces 375bhp and 530Nm of torque, accelerates from 0-60mph in five seconds and has a top speed of around 155mph – will hit these shores soon. Find that bit of open straight for now, in the 2.5-litre version (300bhp and 422Nm of torque), and you’ll let rip through the eight-speed automatic transmission with a 0-60mph time of six seconds at your disposal, and a top-speed – should you be in magistrate bribing mood – of a smidgen over 149mph. Its average of 30mpg is pretty respectable, meanwhile, for a two-tonne hunk of luxury.

The more prudent among us, though, will appreciate the extra effort Genesis goes to when it comes to safety features: Australasia’s independent vehicle safety authority awarded both the G80 and the GV80 SUV five-star safety ratings following a rigorous bout of side impact and oblique pole tests, and other features (centre-section airbag to prevent head collision, and the dials showing the car’s blind sports when indicating, as seen on the Hyundai Tucson and Kia Sorento) offer peace of mind. (Some online-forum pundits have bemoaned the tone of the speed and potential collision rebukes Genesis cars dish out top drivers, but this really is a case of praising with faint criticism.) Adaptive cruise control and a rear-view camera are standard, and you also get the Blind-spot View Monitor (BVM) and Highway Driving Assist (HDA) with the £3,900 Innovation Pack.

All of which calls to mind another common strand to Robb Report’s chats with strangers, while taking this imperious beast a couple of hundred miles west. The G80 starts at £37,460; opt for the 2.5T all-wheel-drive Luxury version – to which you can add, as well as the aforementioned interior benefits, 20-inch wheels and a power tailgate – and you’re looking at a £48,000 outlay. Specced up to the hilt, it’ll set you back £63,440. In comparison the BMW 5 Series starts at a fraction over £40,000 for a 520i saloon but rockets to £72,815 for the M550i xDrive saloon.

How have Hyundai managed to offer this sort of price point for its luxury division’s output? Lower brand recognition (and possibly not being German, some online pundits have mischievously suggested) are factors; other pundits have pointed out that the leatherette upholstery in the entry-level version speaks of a broader culture of carefully curated compromise. And, of course, re-sale values remain unknown at this juncture.

However Andrew Pilkington, who left Polestar UK to become Genesis Motors’ UK MD in mid-2020, suggests that the brand’s impressive pricing structure is all about having changed the way cars go from the manufacturing plant to the nation’s driveways. “When you buy when you buy a Genesis car you buy it directly from Genesis – you don’t have a franchise dealer network needing to generate an income as well,” he says.

“The maker and the retailer are the same entity. The franchise model – whereby manufacturers sell cars to dealers, dealers sell cars to customers – has barely changed since Henry Ford and the Model T,” he says. “We are the last bastion of an industry which hasn’t changed and adapted to changing consumer behaviour. And research – not just ours, but that from Deloitte, KPMG and many others – has found out that the customers are no longer happy with the touch-points in this arrangement. With us, the buying journey is all online – configuring, reserving, financing, organising a test drive – and it is then delivered to the customer’s home.”

A different approach to customer service, Pilkington claims, is also central to the marque’s self-consciously game-changing proposition. “We have salaried Genesis personal assistants, who come from a hospitality background,” he says. “They are service orientated, and therefore interested in you as an individual. They don’t have to worry about whether you’re going to purchase. Their take is, ‘I’m here to understand what you want from a car and how Genesis can fit into your lifestyle.'” There’s also a five-year care plan with every vehicle that includes collection, servicing and a courtesy car.

Genesis Motors has big plans afoot. Its electrification drive has seen the G80E hit UK streets later this year, not to mention new versions of its more compact executive saloon and its SUV (the G70E and the GV60 respectively). If the Genesis Mint Concept is anything to go by, the marque has grand designs when it comes to two-door, electric metropolitan zip-arounds.

Pilkington points out that consumers have been “hungry for a disruptor like Genesis, to offer the customer something different, something that is focused on their needs” – and he may well have a point. Like Genesis the creation-myth Bible opener and Genesis the prog-rock-turned-soft-pop band, Genesis the car marque is named “Genesis” as a reference to new beginnings. In that sense it’s a bold moniker: but it’d be foolish to bet on this particular gate-crasher failing to inject some much-needed vim into the party.