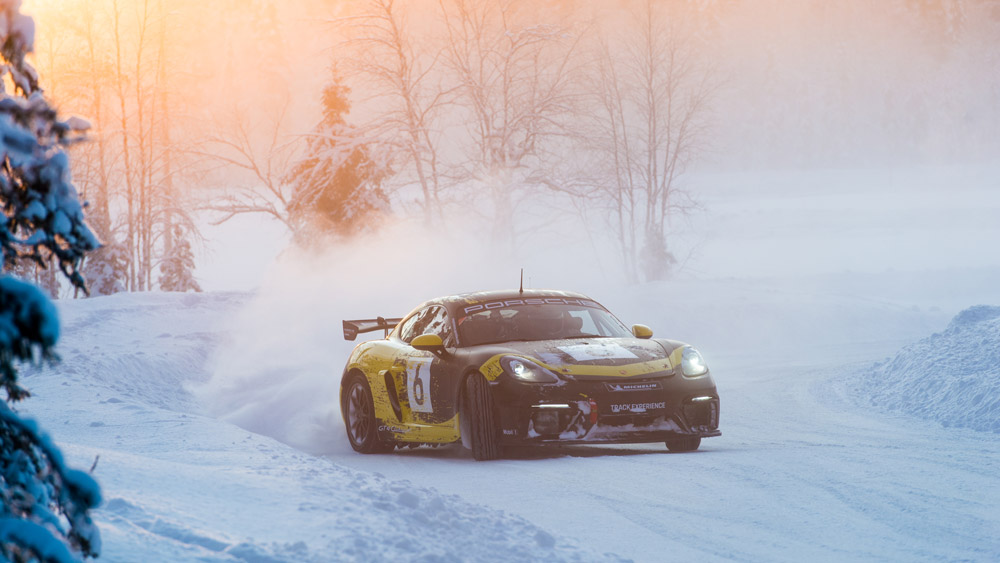 This is the single greatest hour of driving in my life. It’s 10:30 a.m. and the sun is just beginning to crest over the snow-furred pines of the forest here in Finland’s Arctic Circle. The snow and ice glint the color of soft fire.

I’m behind the wheel of a Porsche 911 GT3, a naturally breathing rear-engine machine that is the Stradivarius of sports cars: Control the vibrant machine delicately and it is capable of the most incredible movements. Amadeus himself would have approved. He certainly liked speed and drama wrung out of an ingeniously wrought instrument after all.

The road itself is narrow and banked by high snow walls. Think of a flowing serpent of ice carved out of the pristine forest, eventually forming a half mile circuit that swoops over crests and angles down steep hills. This is but one of the dozens of circuits that comprises the Porsche Ice Experience in Lapland, a customer programme that allows drivers of all levels to fine-tune car-handling skills.

But this particular track is the Platonic ideal: One curve leads graciously to the next, and then the next, tempting a skilled driver to link them in a series of connected drifts.

We’ve written about ice driving before, so we’d understand if it feels a bit, well, played out. A performance car on slippery surfaces sounds fun, surely, but perhaps a bit one-note? Shallow? Is it truly worth spending somewhere between around £6,000 (to share a car) and £10,600?

Getting ready for the next run. Photo: Courtesy of Porsche AG.

Over the three-day Ice Force Pro course, the most advanced winter programme that Porsche offers, I spend up to seven hours a day in a series of 911s, the new Taycan electric sedan, and a Cayman GT4 Clubsport race car. Sometime between sliding a car sideways in utter darkness at the end of the first day, and this perfect hour of driving the GT3 on the third, I have my answers. Taking part in an experience like this in Finland is not just chasing after a good time—it is the pursuit of the sublime.

I’m serious. One of the best parts of being behind the wheel of a sports car, whether it’s on a backroad near your house, a dedicated racetrack, or out here on the ice, is that it takes you out of your normal life. Wheel in your hands, eyes up and looking as far down the road as you possibly can, you can’t concentrate on upcoming tax bills, the problems in your relationship, or any other quotidian worry that normally keeps you up at 3 a.m. Driving fast and hard, you simply have to be in the moment.

Out here, in the frost and blowing snow, hour after hour, you’re coaxed to go far beyond your normal limits. The skilled instructors push you to make a car do all the stuff you’ve previously been told never to do. Make that Taycan go sideways, as fast as you can, so that you can slide around curves in the way you only see Hollywood stuntmen do. Make it heroic. Make it spectacular, with snow and ice spitting out the back wheels. You get points for style out here. And you do it for hours.

Then something else happens. You fall into a rhythm that is Zen-like. Throwing the car sideways again and again becomes a case of mindful mediation—a mantra of rubber speaking to ice. A deep state in which you twist and spin the steering wheel, tap the brake and goose the gas, a gorgeous dance of cause and effect, endlessly replicated but different every time, as the ice changes every lap. (Kind of like life itself, right?) And yet you evolve, too, breathing steadied, mind alert and yet quiet. No music, no concerns, only the being, out here in spectacular nature.

A 911 GT3 powers through the low-traction track. Photo: Courtesy of Porsche AG.

You realise that this is extraordinary. You’ve surpassed the limits of your everyday. You are a driving like they do in the movies, and you’re not even thinking about it any more.

On this perfect hour of driving, as the sun rises, I’m accompanied by four other very-good drivers in our group and the two instructors at the top of the hill, watching appreciatively. Individually, and yet somehow collectively, we each perform our best-ever car ballets.

The course begins with a long downhill carousel. It is off camber. Approach it at speed and the rear of the car steps out, more and more, until you’re driving fully sideways. The hill bottoms out just before a right hand turn over a crest.

All that momentum on the outside tires is built up, barely restrained, and you simply let the car release that pent-up energy by turning the steering wheel back to the centre. Tires slide, the weight of the rear carries the back around like a pendulum, and the GT3 snaps the other way. You’ve attached one drift to another, and now you’re sliding the opposite direction, up and over the crest, carrying the car through a sharp right-hand turn. The nose of the car skims past the snowbank, pricey Porsche grille mere inches away.

We don’t get it right every time. (When you don’t, you tend to slide into a soft snowbank. No harm, no foul. The cars are undamaged.) Reverse out of the snow and head back out, trying once again for perfection.

The light of the Arctic Circle sun flitters through the trees, illuminating the ice. This is as utterly perfect as anything you can imagine. This is not everyday life. This is beyond simple driving. This is the pursuit of the sublime.

The Porsche Ice Force Pro programme comprises three days of driving in Levi, Finland, with all food and accommodations included.