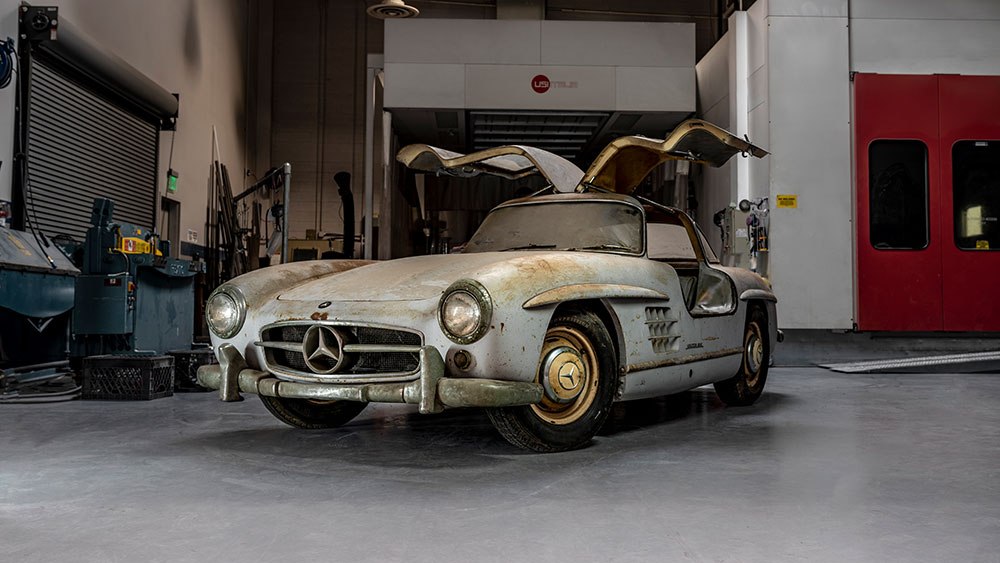 The 24th Amelia Island Concours d’Elegance is a magical place to hear about the illustrious histories of incredible cars, and the “twin” 1954 300SL Gullwings that the Mercedes-Benz Classic Center displayed was no exception. The vehicles bear successive chassis numbers, and No. 43 is a homegrown hero to the Jacksonville, Fla., car show.

“We found this right up the road in Jacksonville,” says Constantin von Kageneck from the Mercedes-Benz Classic Center in Irvine, California, motioning to a gray model parked on the fairway at the The Ritz-Carlton, Amelia Island. “The second owner bought it used and it didn’t have a spare wheel, so he went to a local dealer, Platt Motors, and its tag is still on that rim. This car’s been in Jacksonville its whole life.”

It was originally purchased by a lawyer for the Winn-Dixie corporation, who also founded the local SCCA club, and took it for some racing fun before selling it to his mechanic, who also raced it. It was purchased in 1957 by a naval pilot stationed in Jacksonville, who later went to law school in Gainesville. He was getting ready to paint it, hence the primer grey you see here, and had taken parts off. (Indeed, a bag of rusty bits and trim are visible in the trunk.) And then, in 1965, everything just stopped and that’s the last time anyone saw it. “We know that because he was in the process of re-dyeing the seats, and the newspaper on the back of one of the cushions is from 1965,” says von Kageneck.

Amelia Island Concours founder Bill Warner had seen the car ages ago when he was 16 and informed Mercedes-Benz about it. The company ended up purchasing it in 2018 for just under US$1 million, according to von Kageneck. Gone was the original medium blue hue, and the Classic Center gang found plenty of rat nests in the car, but many original touches remained, including the gooseneck shifter (something only the first 50 or so 300SLs featured), fading gray leather seats, the wheels and the “Englebert Competition” tyres and the drivetrain. On the odometer, 35,308 miles are shown.

Its brother, No. 44, was a factory refresh done at the behest of the customer. The 300SL was originally delivered in fire-engine red paint with a white leather interior, but the new buyer believed the white cabin would be too hard to keep clean. He opted for a natural tan leather interior (with a matching luggage set) with a Mercedes Blue exterior. “The engine was on the dyno last Tuesday, and we power-tested it and put it in the car. It was just finished,” says von Kageneck, adding they don’t test it for the actual amount of power, though he believes it to be “a bit under the 240 hp they used to advertise”.

As for the barn find No. 43, it’s headed to the Essen auction in Northern Germany in a few weeks, and if the person who buys it wants it restored, it’ll head to the Classic Center in Stuttgart. “The cost of restoration would be in excess of around £603,500, and it’s hard to say what the car could get at auction. Unrestored cars are almost doing better than restored cars now,” von Kageneck says. “Either way, today is the cheapest day to restore your car,” he grins. “Tomorrow it will only be more expensive.”