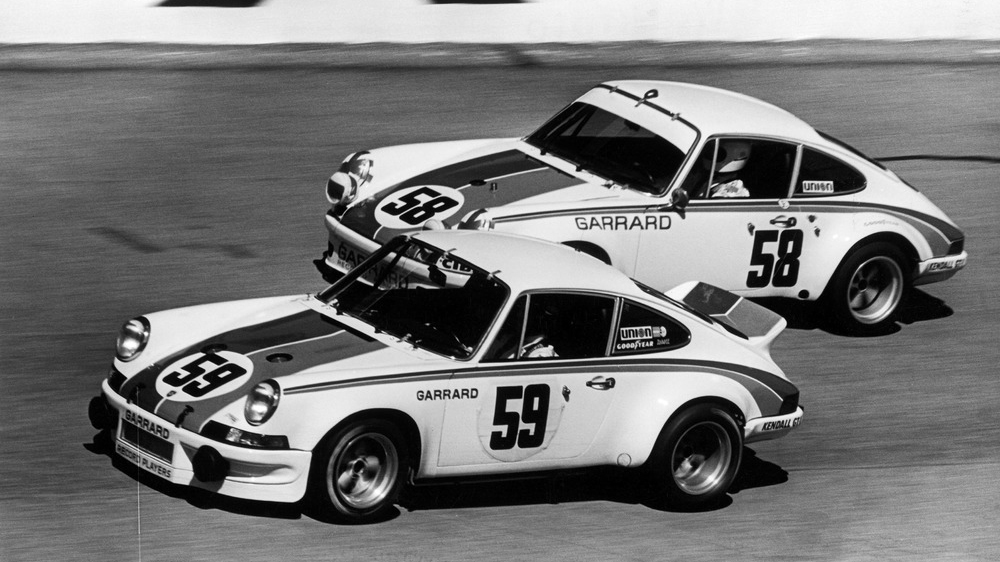 American legend Hurley Haywood is among the most illustrious racecar drivers ever to grace a track. The legend has won just about everything one can: five 24 Hours of Daytona, three 24 Hours of Le Mans, two 12 Hours of Sebring, two IMSA GT championships and one Trans-Am championship. Haywood’s accomplishments are so vast, it’s easy to get tired reading them halfway through. Atop his personal list of favorite achievements: his first 24 Hours of Daytona win, back in 1973, a few years after he served a tour of duty in Vietnam.

This year, at the Rolex 24 at Daytona, Haywood was reunited with his winning wheels, a Porsche 911 RSR—the first ever RSR, actually—and got to race it around the circuit in a historic demonstration before the main event. While Haywood was all smiles after his stint in his old chariot, he told Robb Report things didn’t go as swimmingly some decades ago during the actual race.

“Porsche shipped two of these cars: one to myself and Peter [Gregg, Haywood’s codriver], and one to Roger Penske’s shop,” Haywood explained. “We both got identical cars. Peter, in typical fashion, disassembled the whole car to check everything, and found that the flywheel was loose. He called Roger and told him that but Roger brushed him off, thinking Peter was messing with him. The race gets under way and sure enough, Roger’s flywheel comes undone, and that takes the second car out of the race.”

With just Haywood and Gregg’s RSR running, they became the factory team. Norbert Singer, the engineer responsible for developing the 911 for racing, and the rest of the Porsche brass rushed into their pits. “[Singer and the Porsche executives] were trying to slow us down to a snail’s pace, and Peter’s arguing with them, saying you can’t do that to a racing driver. Once a driver slows down, he gets out of rhythm and tends to make mistakes. Peter told me to ignore the commands,” Haywood recounted.

There were a few things special about this RSR. One, it was effectively a prototype. It was a 911 RS body, underpinned by an experimental RSR engine, gearbox, suspension and so on. Singer and Porsche wanted to test this setup before rolling it out to the rest of the teams, and they’d tapped Haywood and Penske to do as such. It ran in the prototype class because there was no homologation certification from the FIA yet. “The last thing in their mind was that we could win. They wanted to win, of course, but they also didn’t want anything to happen that would damage the car because they wanted it back for analysis and further testing,” Haywood said.

The second unique thing was that Haywood’s RSR was among the first sports cars to be equipped with a radio to the pits. “We’d tested the comms system before the race and it seemed to work decently, so Peter said we’d run it for the race,” he said. While he’d ignored the earlier requests to pump the brakes, somewhere around dawn, Haywood had been pushing hard, but when he came around after turn one, he spotted a sign: “Singer says slow.”

“Peter said we’d better heed the sign, because if anything does happen, Porsche will blame us. So I’m napping down the straightaway and a seagull comes right through the windshield. Just smashed the windshield, and half the carcass is out of the car, and half the carcass is in the car. So I radioed in to say I can’t see and I can’t make it. They came back and said we don’t have a spare windshield; stay out as long as you can.” Haywood did a few more laps with the dead bird wedged in there while his pit crew scrambled to find a new windshield. They first went to Dan Davis, who owned Brumos Porsche, only to be told no, so the resourceful crew eventually went to the parking lot of the race and found a 911 with a windshield that fit, so they bought it and brought it back to the pits and called Haywood back in.

From there on, it was smoother sailing and Haywood and Gregg clinched the victory. “It was pretty important to me because it was my first big win,” Haywood said. As for the car, it returned to the factory, was disassembled, inspected, reassembled, tested, and then sold twice. It sat in a garage in Monaco for a number of years before Jeffrey Sprecher, the owner of the NYSE, bought it. Sprecher generously loans it back to Porsche for events such as this, and Haywood said it’s running “perfect. I pushed it about sixth-tenths out there today, flat out in the banking but taking it a little easy in the corners. It’s just such a great car.”