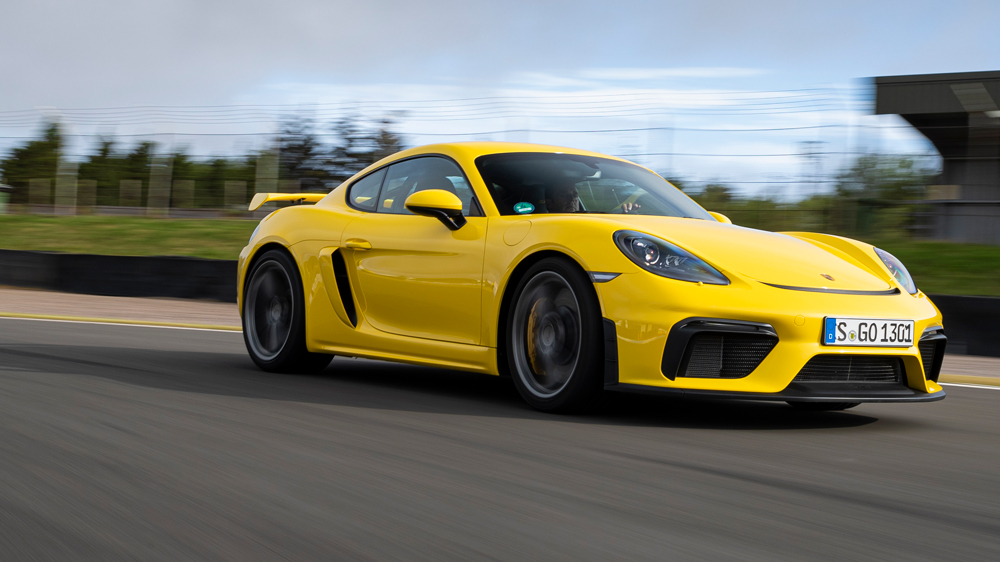 Everyone loves the Porsche 911. The cult following for the German marque’s flagship is so fervent that purists are hard pressed to believe any other sports car is relevant. Then along came the Porsche Cayman in 2006, some 42 years after the 911’s debut.

Though its engine was in the right place (planted amidships for better balance, not over the rear axle like the 911), the newcomer seemed doomed to play second fiddle to the dominant model. It took years for variants of the Cayman coupe to finally leapfrog the capabilities of entry-level versions of its older sibling.

Now that the 911’s iconic status is more cemented than ever, the Cayman has been allowed to run free with the most extreme edition to date: the latest Porsche 718 Cayman GT4. Unlike the 911, whose Carrera models have evolved into comfortable, quick and versatile sports cars capable of racking up serious highway miles in comfort, the Cayman GT4 plays the opposite role of edgy track weapon.

Starting at a tick over £75,000, this tightened, lowered, winged miscreant throws refinement out the window in favour of raw, rewarding driving dynamics. There are overtures toward weight savings, like the nylon door straps that replace conventional handles. But those are more ceremonial nods to the car’s roots in racing than functional ingredients to speed.

However, the fact that the GT4 is tuned by Porsche’s motorsports division means that real world usability sometimes takes a back seat to the cold, hard demands of track use. That rings especially true when go-fast goodies are added, like the innocuously named full bucket seats. The minimalist perches use lightweight carbon-fibre-reinforced plastic construction, and their back sections cannot be adjusted independently of the bottoms.

Getting in and out of the GT4’s carbon-fiber-reinforced seats defies any sense of elegance. Photo: Courtesy of Porsche AG.

Getting in and out with these seats might be one of the most awkward endeavors of any modern car: it’s all but impossible not to plop downward into these buckets with all the grace of a drunk hobbit. Once nestled in, you’ll note the surroundings are starkly finished in grippy Alcantara and some plasticky, leatherette surfaces. Not the stuff of champagne wishes and caviar dreams, unless you’re talking about a Dan Gurney–style splash of bubbly on the winner’s podium.

The steering wheel and dash offer few distractions from the road ahead. Photo: Courtesy of Porsche AG.

My manual transmission–equipped tester’s tenacious grip begged for fast corners and razor’s-edge driving, which my long-suffering wife found to be, well, a bit much. Right-seating in most committed sports cars is often a thankless task, and in this application it’s a particularly grueling responsibility since the GT4 rides rather stiffly due to, understandably, its stiffened kinematics.

The 414 hp flat-six power plant is now naturally aspirated, as opposed to the largely unloved turbo four-cylinder. And even though the engine is a model in predictable linearity, rather than neck-snapping thrust, it’s possible to accumulate velocity quickly enough to elicit more than a few yelps and yaws from your significantly perturbed other. As electrifying as it is for the driver, it can be equally terrifying for the passenger, an inequity that can only be remedied by one thing: a driver swap.

Once the awkward switchover to the other deep-bucketed seat is complete, she eases the Racing Yellow steed forward and almost immediately gets it. The Cayman GT4 is all about being in control, not abandoning it. From behind that simple steering wheel, which happens to be devoid of stereo adjustments or frivolous distractions, you’re doing one thing and one thing only: driving. Sure, the engine’s exhaust note is more evocative than the standard 718’s four-cylinder. But the GT4’s secret weapon is its handling, which is sharp, direct and gratifying when executed properly.

At times irascible but always engaging, this smaller, lighter alternative to the 911 reminds us of what the flagship once was, before it became refined to an inch of its life. The 718 Cayman GT4 is refreshingly brash, spunky and challenging in a way that only a fresh-faced challenger can be. The 911 may continue to be the standard setter, but the GT4 is the wild young buck, roaring and ready to go. All icons should be so lucky as to have such rapscallions nipping at their heels.