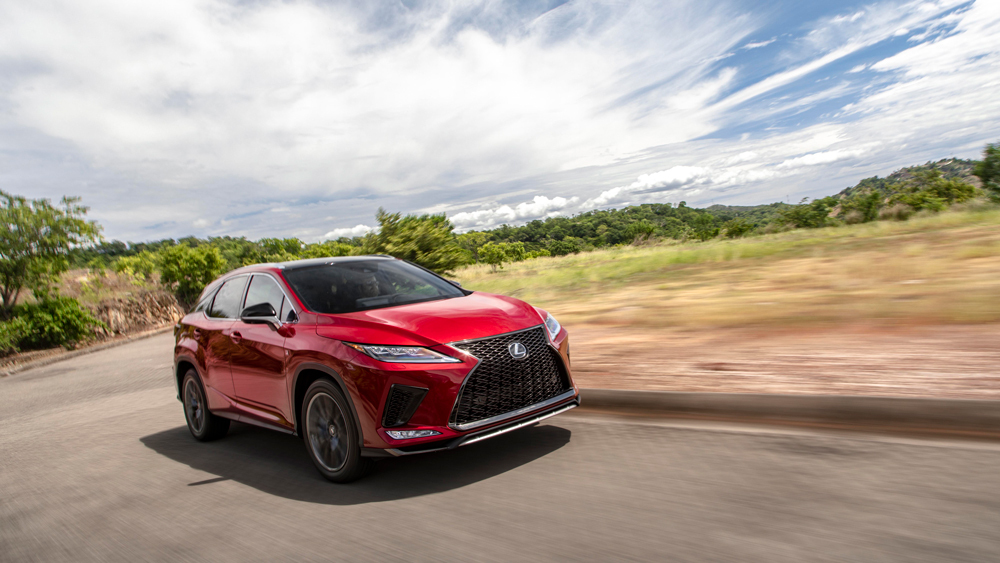 When the Lexus RX arrived on the scene 20 years ago, it was the first luxury crossover, effectively creating a new segment, a risky play for a brand that had only been formed a decade earlier, in 1989. While SUVs were just beginning an automotive revolution and fast gaining in popularity, they were body-on-frame, truck-like propositions that were more rugged than sumptuous. As Lexus chief designer Koichi Suga recounts, there was great internal discussion at the time – would buyers go for a more nimble, car-like ride?

There was of course a raised ride height, space and practicality, as well cushy leather seats and a quiet, serene cabin. Lexus’s CALTY design studio in California assured top brass that the RX would be a huge hit, that there might be something to the idea of such a crossover, which seemed to alleviate concerns. The rest, as they say, is history. The RX is the brand’s greatest-selling vehicle, and even outsells entire luxury lineups. Last year, only one luxury model sold more in America, the brand-new Tesla Model 3. And for 2020, Lexus has directly addressed areas that could use improving, to shore up its most popular offering.

Our first experience with the RX is in the 2020 RX 450h. The 450h employs the same direct-injected V-6 of the RX 350, but adds two electric motors to create its hybrid system. The model variant is a fitting choice, as our drive is in the eco-conscious country of Costa Rica. Power is upped from 295 hp and 267 ft lbs of torque to 308 hp, but the main target is improved fuel economy. Significantly, combined MPG leaps from 22 MPG to 30 MPG on the 450h.

Snaking along a vibrant, lush green road through Guanacaste’s rainforest, passing tropical flora and ever-changing skies, a few observations immediately emerge. The hybrid’s CVT operates seamlessly, and power comes on in a linear, smooth fashion. The ride is lively, and it feels like you’re in a crossover two-thirds the size. The cabin is whisper-quiet, road and wind noise are almost non-existent, the only sound is the engine accelerating forth, not overly aggressive or sporty, but still pleasing.

Part of that ever-so-quiet cabin is in part thanks to one of the changes that you can’t see. A new laser-stamping technique gives the new RX models up to 10 times the stiffness in certain crucial areas, including around the passenger door frames. This adds up to a stiffer chassis, improved dynamics and less noise and vibration, in addition to a stronger structure. As far as changes you can see, there are quite a few minor ones that are worthy of noting.

The front fascia has been revised, the Lexus spindle grille is slightly larger—it probably fits best on the RX, with its grand, angular proportions—in addition to slimmer triple-beam LED headlights. The taillights have also been revised, and overall the RX looks a touch more taught, a little sharper. The interior receives a few updates, and probably most significant of all is a touchscreen option for the navigation and infotainment. Long a weak point, the Lexus touch pad offered an inconsistent—and sometimes frustrating—experience. The pad remains for those that are used to it, or like the user experience, but the added touch functionality gives owners another welcome option.

The Lexus RX 350 uses an eight-speed automatic transmission to channel power to the front, or all four wheels. Delivery is smooth, though not quite as seamless as on the hybrid. And though power figures are similar, 295 hp to the hybrid’s 308 hp, the on-demand torque from the electric motors makes the hybrid feel much more powerful, despite the added weight of the hybrid system.

And while the RX handled itself admirably on beautifully winding roads near the Peninsula Papagayo, where this crossover will really earn its keep is in big-city traffic. Perhaps nothing—shy of a Rolls-Royce, Bentley or S-Class—makes for such a pleasant environment as the cocoon the RX provides when stuck in a stop-and-go commute. Everywhere you touch is cushy, padded leather and, with superior insulation, you feel removed and in your own decadent bubble.

Room and a view inside the Lexus RX 450h. Photo: Courtesy of Lexus.

While pricing won’t be announced until closer to its arrival at dealerships in the Autumn, expect the RX 350 to start around £49,705, with the hybrid commanding a £1,600 premium, one that’s certainly worth the difference. A generously equipped 450h F-Sport should run about £35,200, and includes a premium Mark Levinson audio system, a 12.3-inch nav-equipped touchscreen (upgraded from the standard 8.0-inch screen), triple-beam LED headlights, a colour head-up display, a panoramic view monitor, blind spot monitor, parking assist and much more.