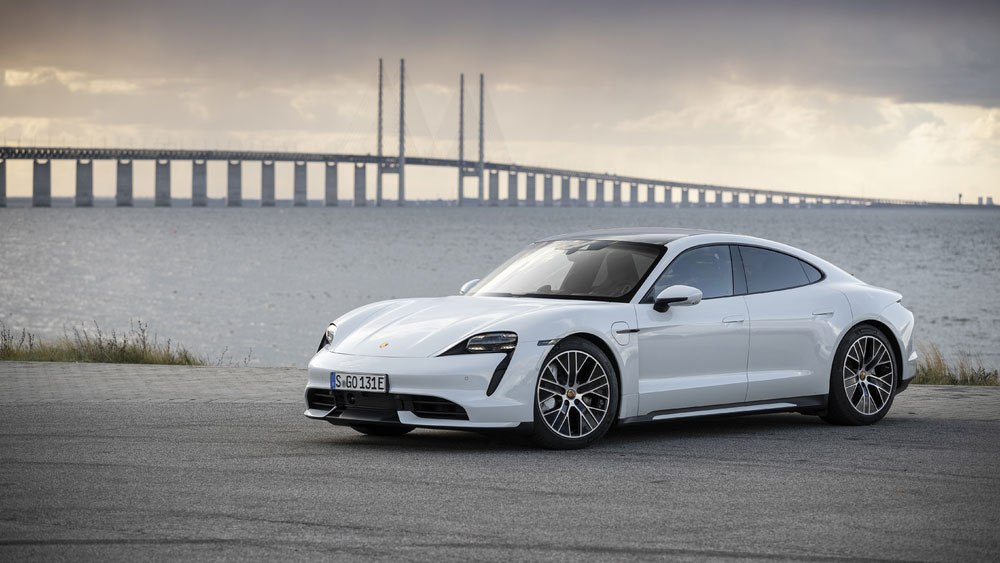 The Porsche Taycan isn’t a Tesla fighter. The shared traits between the German manufacturer’s first all-electric sedan and Elon Musk’s Model S largely start and end with the fact that neither employs a combustion engine. But they’re not really comparable vehicles. You buy a Tesla if you believe electrification is the future, that the transportation industry shouldn’t drain our natural resources, and eking out maximum efficiency is a thrilling challenge. Taycan buyers won’t care about any of that. No, they’ll only want repeatable, blistering and uncompromised performance. After all, they’re foremost fans of the Porsche crest on the nose and the brilliant driver-focused heritage it represents; it just so happens the Taycan is electric.

When performance is your primary engineering objective, you’d better deliver in spades. We got a chance to bomb around Denmark and Germany for two days in both Taycan models, the Turbo and the Turbo S, to see if these diabolical salvos indeed demolished the target. The fundamental chassis for both models contains two synchronous electric motors, one mounted on each axle, fed by a 93 kWh lithium-ion battery pack mounted low in the skateboard. While the Taycan features an all-wheel-drive configuration, power can be biased towards either axle depending on the drive mode and how hard you’re pushing it. A two-speed transmission adjoined to the larger rear motor is a pure bid for maximum acceleration. (Wondering why Porsche called non-turbo cars Turbos? The answer is over here.)

After settling into a Taycan Turbo clad in a comely deep blue hue, I find the seating position is purposefully reminiscent of a 911. The welcoming, curved driver’s display gives a subtle futuristic touch to the cabin, as do the two centralised touchscreens. It can take a minute to dive through all the various infotainment and settings menus to get the car dialled in to your desired set up, but cycling through the drivetrain options—Range, Normal, Sport, Sport Plus and Individual—is simplified by rotating a dial on the steering wheel.

The seating position is reminiscent of a 911. Photo: Courtesy of Porsche AG.

Sport and Sport Plus both afford the full shot of 626 ft lbs of torque, seemingly from the lightest press of the pedal, and the accompanying lurch can be a mite tiresome while navigating a busy city like Copenhagen. The jerkiness evaporates in Range and Normal mode, so those are your best options for stop-and-go traffic or low-speed cruising. Range and Normal still offer an astounding amount of power; mat the accelerator in either and 616 hp instantly shoots you forth.

On silky country backroads, pop back into Sport Plus to feel the Taycan hunker down as the adaptive air suspension stiffens up. The torque curve is linear and the Turbo will continue to accelerate at an alarming rate for as long as you’ve got asphalt. Sample launch control to discover a gut-punching tear to 60 mph in (Porsche’s conservatively estimated) 3.0 seconds, and keep your foot in it to arrive at 124 mph in 10.6 seconds. You can hear and feel the rear motor’s gear change, somewhere around 60 mph, an odd sensation in an EV, but it markedly helps you fire off with vigour.

Chuck the Taycan into a turn and you’ll feel the 5,121-pound sedan’s largess, but its nimbleness belies that scale-cracking integer. It cuts far better than it has a right to, affording solid feedback from the wheel the whole time. You’ll get understeer if you’re properly cooking it, but modestly paced road drivers likely won’t notice it (or care). It’ll dance through tighter exchanges with more ease if you’ve opted for the rear axle steering option, a feature that comes standard on the Turbo S.

That “S” lurking behind the name of the Turbo’s big brother may as well stand for “Savage.” While the overboost function on the Turbo will get you up to 670 hp, in the Turbo S, it ratchets up to 750 hp. You’ve also got 774 ft lbs of yank and that means this sucker hauls. The rip to 60 mph happens in under 2.6 seconds, all while you white-knuckle the tiller. On Germany’s autobahn, hitting the top speed—we realised 165 mph—takes no time at all, and the Turbo S pulls the whole way to its Vmax.

With the launch control feature, the Taycan tears from zero to 60 mph in 3.0 seconds. Photo: Courtesy of Porsche AG.

To stop the hauling freight train that is the Taycan requires 10-piston aluminum monoblocks up front, and four pistons in the rear. On the Turbo S, those are biting down onto 420 mm carbon-ceramic discs, while you get 415 mm iron rotors on the Turbo. (The back rotors are 410 mm and 365mm, respectively.) They’re both beyond adequate, but you’ll want the larger carbon ones.

We hammered both the Turbo and the Turbo S for more than 300 miles each day, and each only required about a 25-minute charge to go from under 10 percent to 80 percent, thanks to the vehicle’s 800-volt technology and a 270 kWh charger. When the Taycan knows it’s headed to the charger, it will precondition the battery to arrive at the optimal temperature to receive the electrons the quickest. While the reported range is somewhere around 279 miles (the EPA has yet to weigh in, though estimates there could be about 220 miles), notably less than a Tesla, range anxiety behind the Taycan wheel doesn’t feel as prominent, though it’s still there.

Our Taycan only required a 25-minute charge to go from 10 percent to 80 percent capacity. Photo: Courtesy of Porsche AG.

After hours of spirited driving, our Turbo realised it would arrive at a charging stop with about one percent state of charge, so it limited the speed to 55 mph (you can push through this ceiling), shut off the air conditioning, and moved its recuperation to the maximum setting. A little annoying, since this occurred while on the autobahn, but understandable given how hard we’d been pushing it for the last four hours. And that’s Porsche’s ultimate goal: make a car that can be driven hard for an extended period of time, not only in fits and starts.

Porsche set out to build an exemplary performance car on an electric platform instead of an electric car that has exemplary performance. That’s a key point of distinction, one which Elon Musk may do well to note as he attempts to turn the latter into the former. The Taycan may not be perfect—first attempts rarely are—but it accomplished its mission. If the Taycan is the jump-off point for Porsche’s foray into the world of electrified performance, we’re eager to see how far the marque can push it.