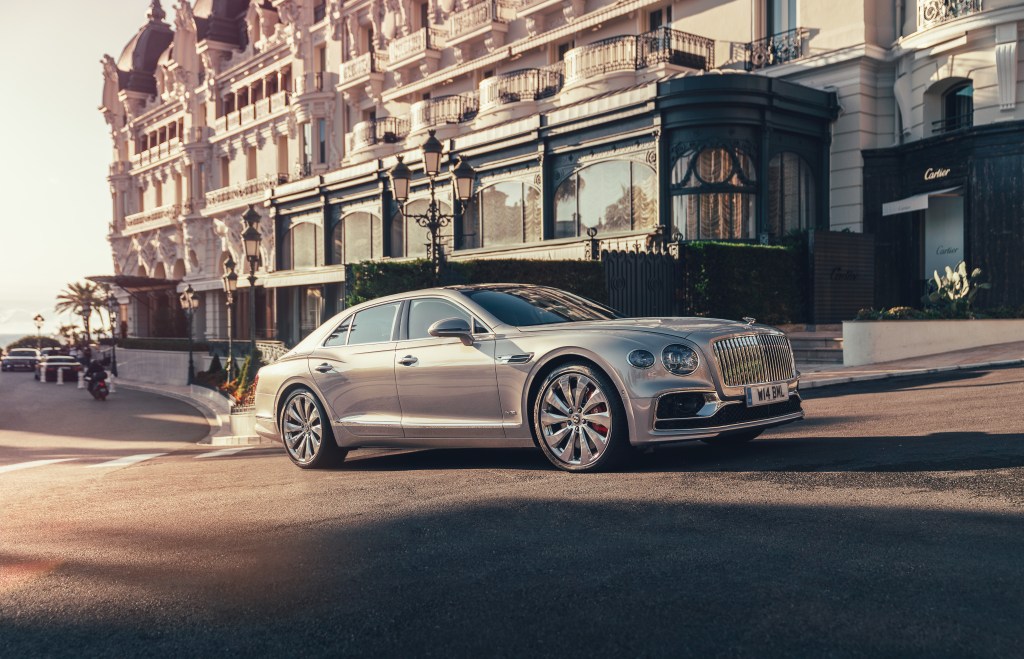 Launching a car in Monaco might seem like an indulgence – the sort of thing that manufacturers would do to try and grab some reflected glory from an exotic location. But Monte Carlo’s Casino Square was an entirely appropriate place to start a drive in the new Flying Spur. Barring Bentley’s factory in Crewe there can be few places in the world with a higher concentration of the company’s products than the tiny principality.

The Flying Spur is also welcome proof that Bentley hasn’t given up on saloons. As in the lowlier parts of the car market, luxury buyers are showing a marked preference for SUVs these days. Bentley’s own Bentayga constituted nearly half of production last year and outsold the combined totals of the outgoing Flying Spur and Mulsanne by nearly two to one. A lesser company might have used this move as an excuse to give up on the segment, or indeed to double its bet with a second SUV. But with the new Flying Spur, Bentley is keeping the faith.

Like its predecessor, this Spur is closely related to the Continental GT Coupe. The two cars share engine, transmission and most of their under-body architectures, with both also having much DNA in common with the Porsche Panamera. But the characteristics required for a luxury saloon are subtly different to those of a Grand Tourer, meaning a huge amount of work has been put into the making sure the Spur delivers the correct sort of dynamic experience.

It certainly has the visual presence necessary to cut it in Monaco. The original Flying Spur always looked under-detailed, and although Bentley tightened the design with a major refresh in 2012 it always looked like a coupe that had been extended in the middle. The new car’s front axle has been moved forwards in relation to the windscreen, with this modest 120mm migration giving a far better looking side-on proportion. The front has a clear relationship to the Continental GT, with circular lights on each side of a huge grille, with the imposing design arguably working better on the saloon than the coupe.

There’s a similar story inside, where the Spur has borrowed heavily from the Continental GT, certainly in the front where the driver looks at a very similar dashboard. But given that the coupe already led its segment in terms of both interior design and what it’s hard not to describe as razzmatazz, that’s no bad thing. The central display screen rotates like the number plates of James Bond’s original DB5, being replaced by either a trio of chrome-bezelled dials or unadorned wood trim. It’s a party trick I suspect few owners will ever grow bored of demonstrating.

Much more attention has been given to the rear of the Flying Spur than the Continental GT. While Bentley acknowledges that most buyers will drive themselves at least some of the time, much of the Spur’s work will be as a limousine. The back seats are supremely comfortable, the rear of the cabin spacious and cossetting. The toy count has gone up massively compared to the old Spur, with a detachable touchscreen controller which can perform various functions including another crowd-pleaser: the ability to motor the “flying B” mascot that sits at the top of the radiator grille up and down.

Navigating the Spur through Monaco’s tight and busy streets proves that few large cars shrink as well. At 5.3 metres in length the Flying Spur is longer than even an extended wheelbase Mercedes S-Class, but in traffic it feels wieldy and unintimidating, maneuverability helped by a rear-wheel steering system that tightens the turning circle.

Under gentle use the mighty W12 engine wuffles unobtrusively and delivers effortless progress. Like the Continental, the Spur uses a twin-clutch gearbox rather than a conventional automatic, a type more normally chosen for snappy reactions than low-speed refinement. Bentley executives admit that tuning this to deliver appropriately cultured behaviour was one of their biggest challenges, yet they seem to have been entirely successful. In town it’s as if it isn’t there, the transmission shuffling its ratios completely seamlessly.

It’s not just been designed for urban crawling, of course, with Bentley’s test route including both a lengthy stretch of French Autoroute and then the chance to attack some of the fabled Route Napoleon in the hills above Nice. Given the chance to stretch its legs the Spur is reveals other sides to its personality. It feels supremely stable at speed, with almost impeccable refinement even at the sort of velocities that would be likely to earn a chauffeur a stern reprimand from the back seat.

But it is the mountains that turn it truly special. The previous Flying Spur tolerated faster progress, but had little appetite for it. This one seems to relish the challenge of corners and even rough road surfaces, the W12 delivering both huge speed and a sonorous soundtrack, the all-wheel driven chassis finding a correspondingly huge amount of grip. The Spur remains a heavy car – nearly two-and-a-half tonnes on Bentley’s figures – and brakes and tyres take significant punishment when dealing with the forces generated by higher speeds. But I can’t think of another luxury saloon that feels capable of cheating physics to anything like the same extent.

The Spur is not quite as serene as the (significantly more expensive) Rolls-Royce Phantom, a car with a cabin that would make many sensory deprivation chambers feel loud. But the Bentley also feels much more athletic than any current production Rolls, or indeed the also-ran Mercedes Maybach. It is also much more fleet of foot than its grander Mulsanne sister. Overall the compromise between outright luxury and driver reward feels almost perfectly judged. Interest in saloons in this part of the market might be waning, but the new Spur really is the very best of its type.