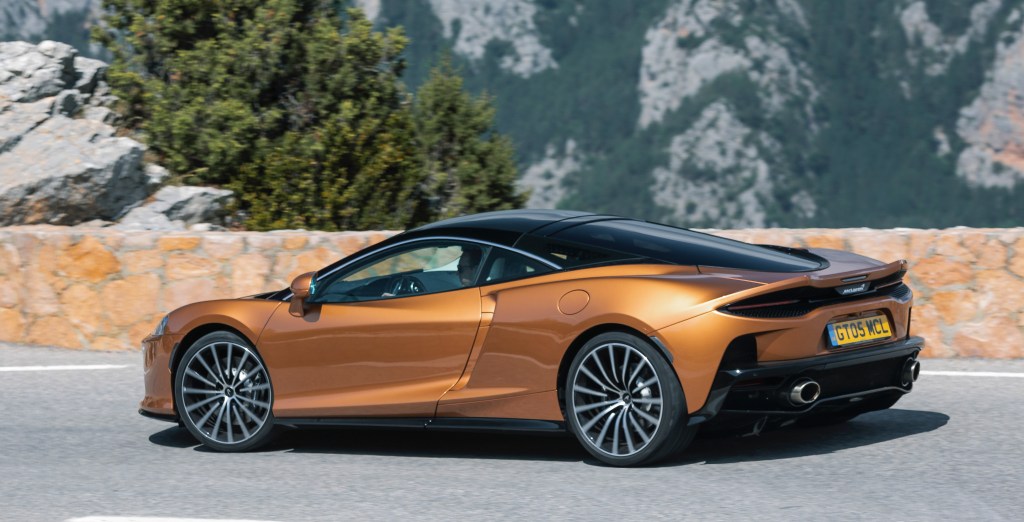 McLaren makes supercars. That hasn’t previously been up for debate. Since the launch of the MP4-12C in 2011, all of its products have had performance some way above practicality on the list of attributes. Some of its more affordable models have got closer to the territory more occupied by pricier sportscars. But the dynamism inherent in building a car with a carbon fibre core structure and a mid-mounted engine – two qualities that all of the company’s cars have shared – has always defined the brand’s character as an extreme one.

Yet that’s no longer the case. Despite using the same basic ingredients, McLaren tells us that the new GT belongs to a substantially different part of the market, and no clues for guessing which one. The company insists that we are to see its new model as an entirely credible grand tourer; a justifiable alternative to rivals like the Bentley Continental GT and the Aston Martin DB11. 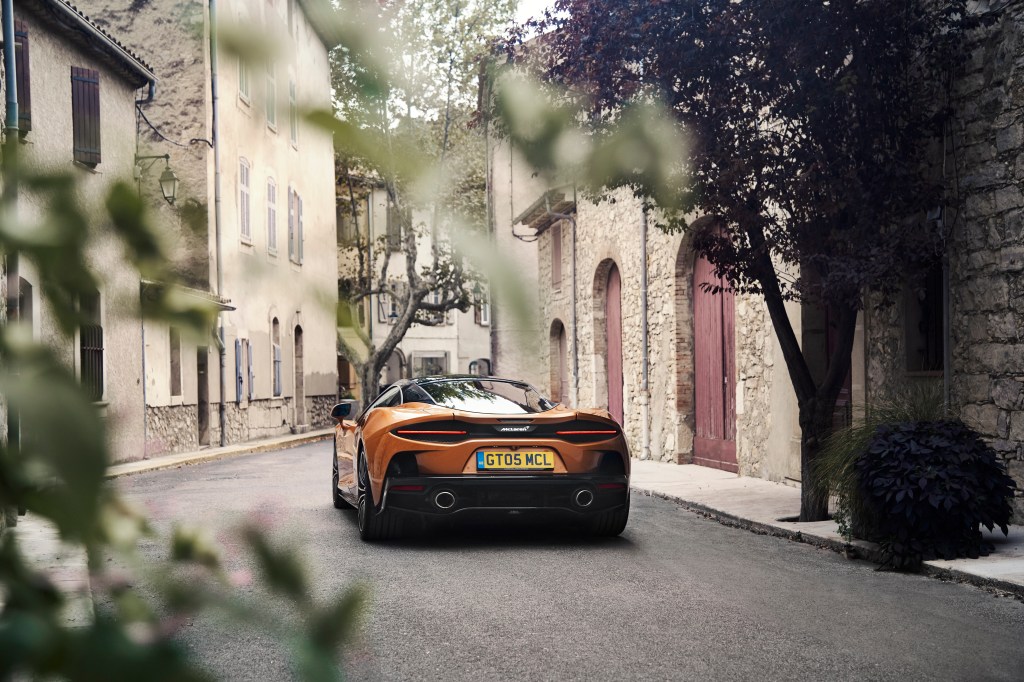 It’s fair to say that the differences to that list of rivals are perhaps more obvious than the similarities. Unlike them, the McLaren remains a strict two-seater (only the three-wide Speedtail has given the brand’s modern-era buyers the chance to travel with more than one passenger). Plus, of course, it still has a brawny V8 mounted behind the passenger compartment. 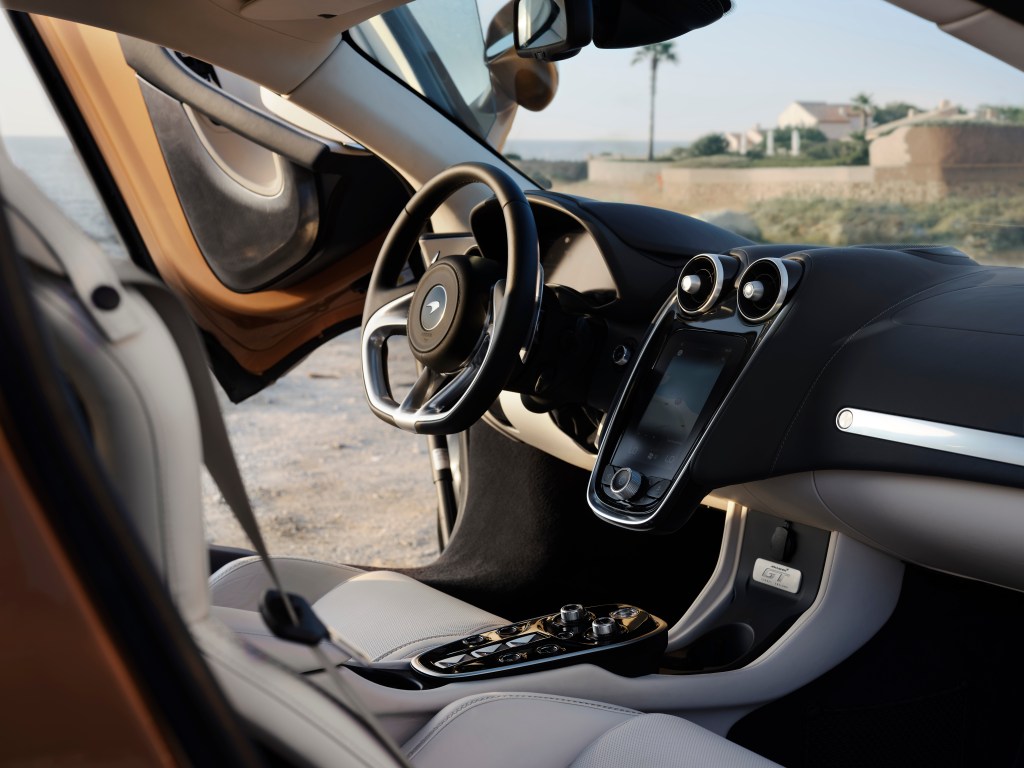 Like the 570GT, which it effectively replaces, the new GT boasts a rear luggage compartment above the engine. But while the 570 was essentially wearing a backpack, the pure GT is bigger and more practical. The old side-opening tailgate is gone, replaced by a conventional front-hinged lid which also benefits from power operation. Beneath it there is 420 litres of space – it feels odd to be discussing boot capacity in a McLaren review – which is enough to accommodate both a full-sized set of golf clubs and two flight bags at the same time. It also has under-floor air channels and a special lining to protect luggage from heat generated by the engine that sits beneath. There’s another 150 litres of room under the front bonnet as well, making a total that exceeds what you could squeeze into a Volkswagen Golf hatchback. 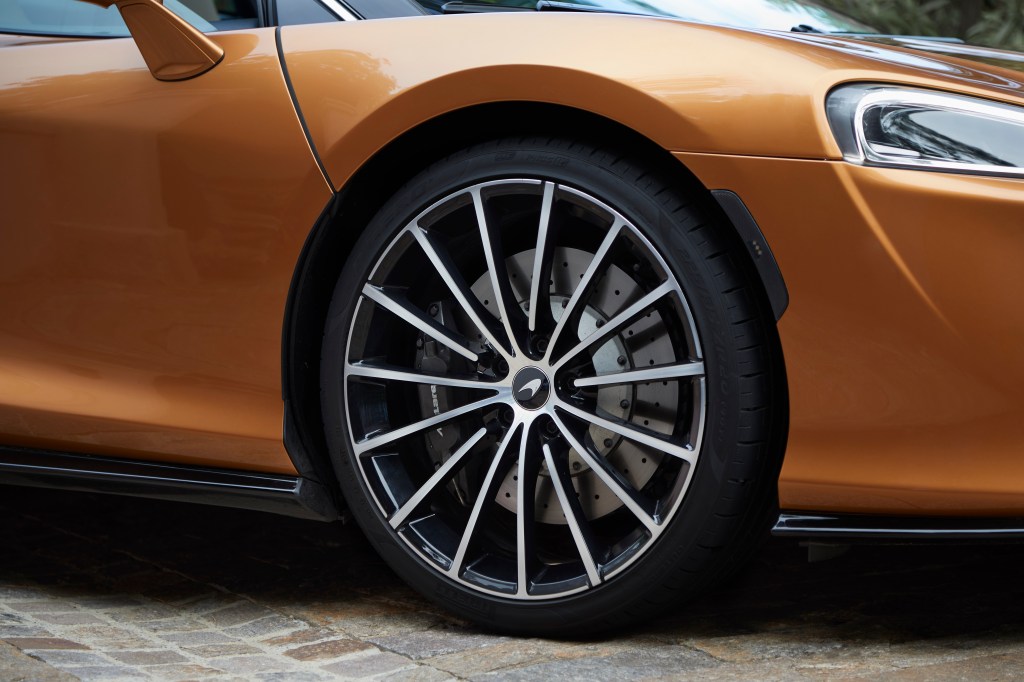 The act of getting in is where the GT feels least GT-ish. Access has been improved over other McLarens, but it is still a low-slung car and reaching either seat means negotiating the wide sills of the hugely strong carbon fibre tub that sits at the heart of the car. Once in place, trim is definitely plusher than the McLaren norm, with high-quality hide covering most visible surfaces and metal detailing in place of the naked carbon fibre trim more normally associated with McLaren. It hasn’t gone too far – it’s still very understated compared to something like the Continental GT. “We considered wooden trim for about 30 seconds,” McLaren’s design director Rob Melville admits, “then realised it wasn’t right for us.” Seats are wider and intended to be more comfortable on a journey, although they still grip harder than is normal for a grand tourer. 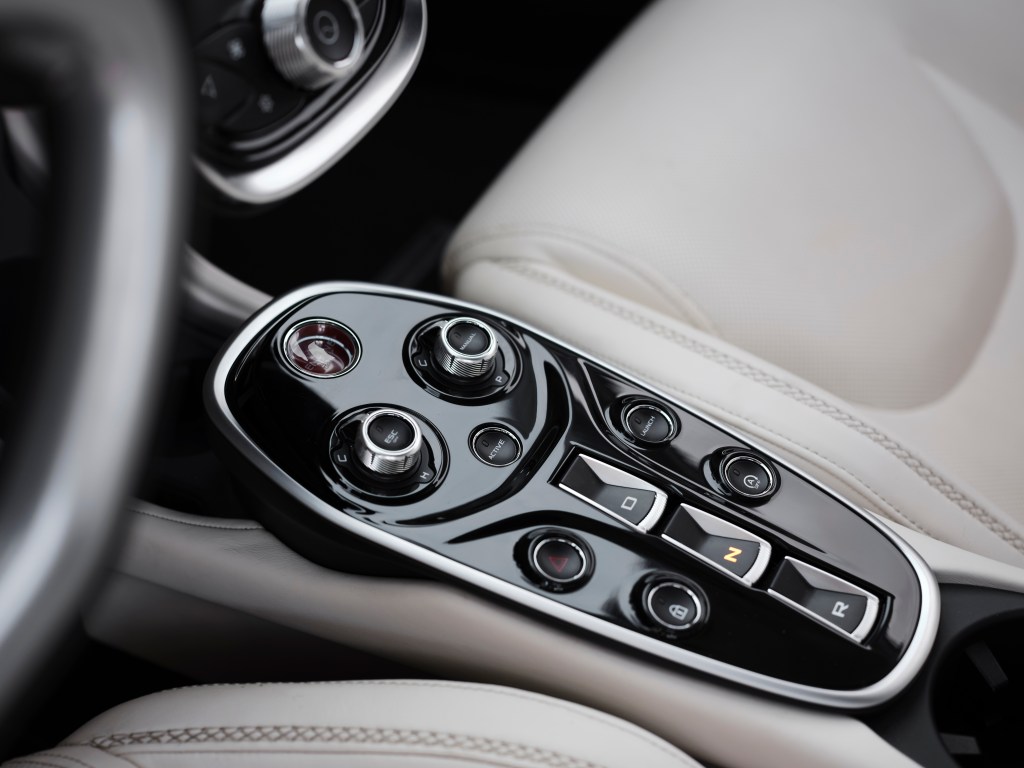 Driving a test route on some of the more spectacular mountain roads near Nice, the GT proves itself impressively comfortable, but also remarkably quiet: a special achievement when you consider both the challenge of having an engine behind the passenger compartment and carbon fibre’s ability to transmit noise. The engine is hushed under gentle use but finds its voice when asked to deliver harder progress. There’s noticeably more low-down torque than is normal for a McLaren, and the GT delivers impressive pace with minimal effort. Pushed harder, it demonstrates a ravenous appetite for revs and delivers enormous performance. McLaren quotes a nine-second 0-124mph time, remarkable given the GT is the largest and heaviest car in the range. 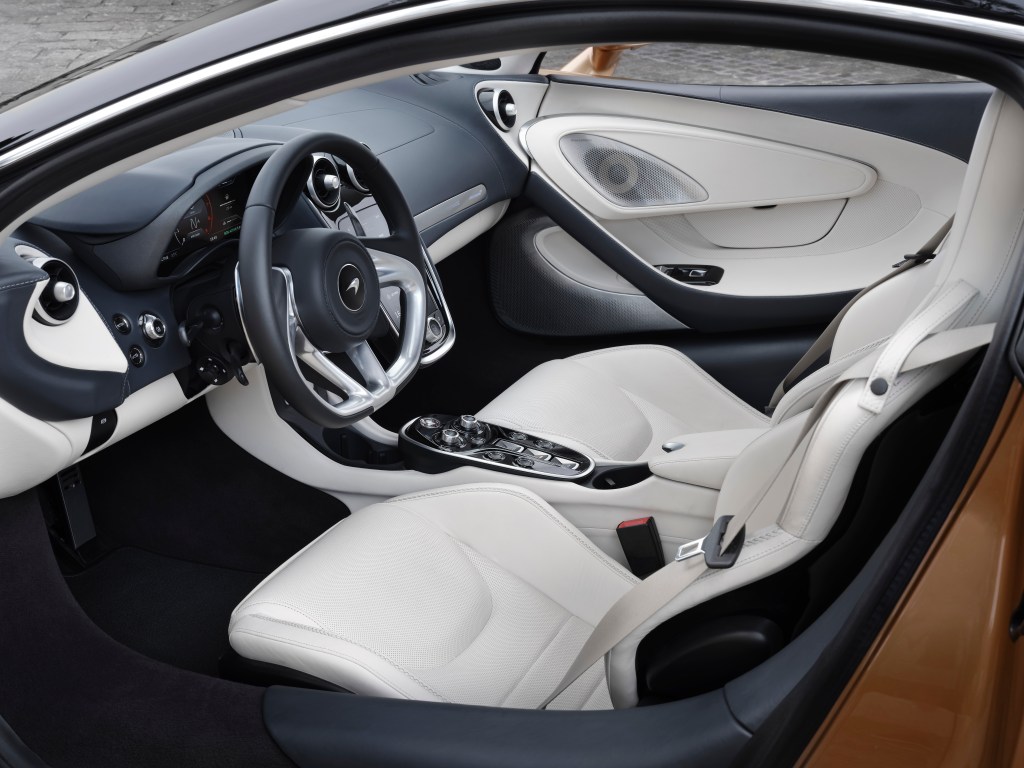 Suspension is probably even more impressive, the GT’s body staying under tight control even when asked to attack a rough road surface with their dampers in their softest setting. There’s no sense of harshness, but nor is there any sensation of unwanted harmonics building up. The ‘Sport’ and ‘Track’ modes aren’t too harsh for road use, either, and in its more aggressive settings the car delivers an impression of its more dynamically focused sisters, if a slightly muted one. Yet steering feel has been diminished, without the bite and precision McLarens normally have. It’s a very grand tourer-ish helm, and a measure more direct than the one you’d find in most front-engined alternatives; but it feels like a downgrade over the closely related 570S or (more particularly) the 600LT.

Other niggles? The GT’s gearbox is the same twin-clutch unit fitted to other McLaren models, and this is never entirely convincing when asked to function as an automatic, especially when asked to kick down for the sort of short-notice acceleration needed for confident overtaking on twisty roads. It’s no great imposition to take control of ratio selection through the steering wheel paddles, of course. Rear-view visibility through the back screen is also limited – a UV-resistant coating struggles to transmit light hitting it from certain angles, especially when viewed through polarising sunglasses. The substantial shoulders of the GT’s side air intakes are always prominent in the door mirrors, too – my peripheral vision reporting them as another close-following vehicle several times. 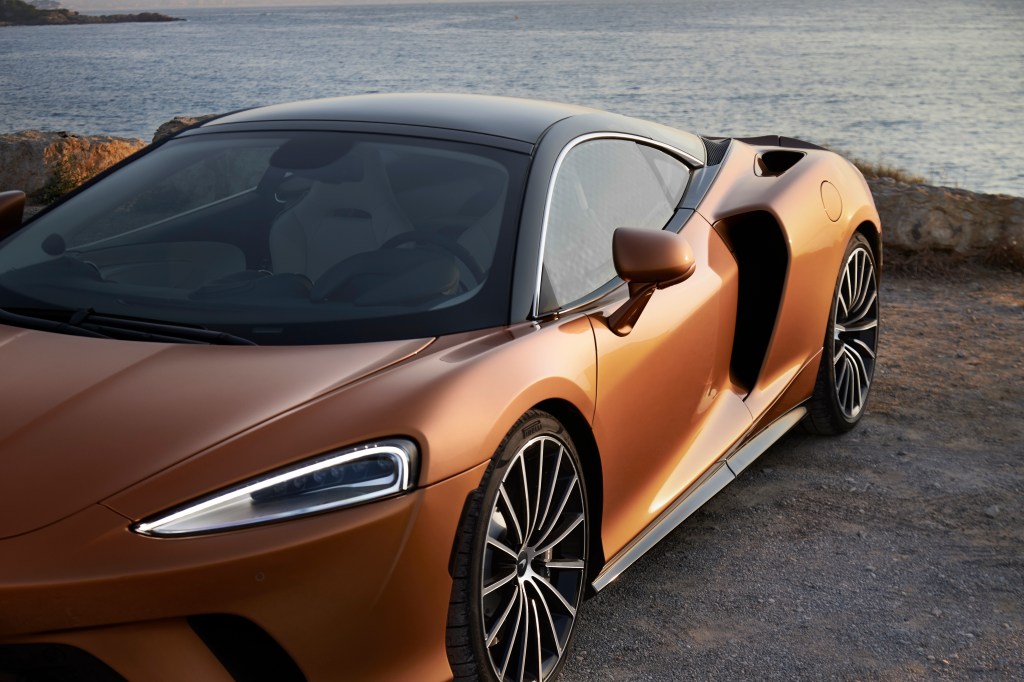 There’s a huge amount to like about the McLaren GT, despite it feeling like the sort of car that buyers will have to explain choosing to their friends. It is less focused and McLaren-like than the company’s other products, and yet also considerably less practical than the cars it is aimed at: although the company would point out that the first GTs were born into a world before supercars and were fast, light and agile, only turning bigger and heavier as time moved on.

The GT delivers the ability to make rapid progress in high comfort, and to lug more luggage than any other McLaren, yet does not feel anything like a conventional Grand Tourer. For some that will undoubtedly be a positive, not least the 570GT buyers who said they wanted something more practical. The GT will be a disruptive element in what has always tended to be a traditional and samey part of the market.