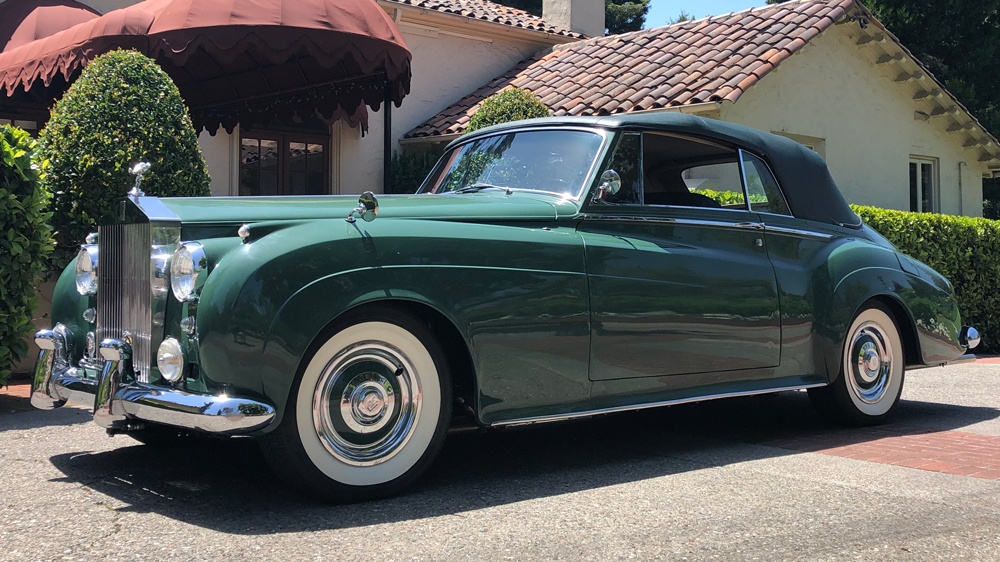 A subtle though quite spectacular homecoming occurred on July 23 on the edge of Manhattan’s Upper East Side. There, at The Pierre Hotel on Fifth Avenue, a 1961 Rolls-Royce Silver Cloud II H.J. Mulliner Drophead Coupe was parked under the building’s protective marquee adjacent to the hotel’s side entrance on East 61st Street. In sparkling, original condition, the matching-numbers, left-hand drive convertible (one of only 20 or so built) attracted plenty of attention—and it has continued to do so each subsequent day that it’s been on display. The car, painted a custom “smoke green” colour at its original owner’s request, is even more noteworthy given that its original owner was Elizabeth Taylor.

The car’s showcase coincides with its upcoming sale at an auction held at the hotel and hosted by Guernsey’s. “Stars come and go, but Elizabeth Taylor seems to be such an important figure,” says Arlan Ettinger, Guernsey’s president. “She was a star at a very young age as a child actress and remained a star throughout her whole life. And this car wasn’t a passing fancy for her.”

Taylor ordered the drophead coupe in 1960, and the car was delivered to her in New York while she was temporarily living in The Pierre Hotel with her new husband, Eddie Fisher. The then-28-year-old actress quickly nicknamed the car the Green Goddess and, in 1962, she and Fisher brought it with them to Rome for the filming of Cleopatra, a movie that showcased Taylor in the lead role and one that boasted a record-setting budget for that time. During that Italian excursion, Fisher mildly damaged the car’s fender while rushing to the film set.

Coincidentally (or perhaps not), Taylor divorced Fisher two years later but kept the Rolls-Royce. In fact, the Hollywood starlet—then the world’s most famous actress—kept the car for almost two decades, considerably longer than any of her eight marriages. Eventually, Taylor sold her bespoke Silver Cloud sometime in the late 1970s, and it has remained in that owner’s protective custody until now.

The Rolls-Royce after Eddie Fisher damaged it in Rome. Photo by Dial Fotos/AP/Shutterstock.

On August 6th, at 7:30 p.m. EST, Guernsey’s will offer the Rolls-Royce for sale during a two-vehicle auction. (Ettinger is reluctantly consigning his own automotive pride and joy, a 1964 Ferrari 330 GT.) With fewer than 40,000 miles on the clock and in fine working condition, the Rolls-Royce—were it not previously owned and commissioned by Elizabeth Taylor—might sell for $600,000 (just under £500,000) or $700,000 (just over £575,000), according to Ettinger. Because of its Hollywood provenance, however, this rare and undisputable one-of-a-kind drophead coupe is estimated to command as much as $2 million (£1.64m) when it rolls across the block.

Ettinger acknowledges that the estimate is just his guess, though it is based on the results of a Christie’s-led Elizabeth Taylor auction held five years ago—a sale that saw every item sell for significantly more than its inherent value because of the connection to her.

Most notably, this Rolls-Royce will be auctioned with no reserve, meaning someone is guaranteed to acquire a classic British grand tourer, one owned by an actress who, as Ettinger describes, was “one of the greatest stars of all time”.