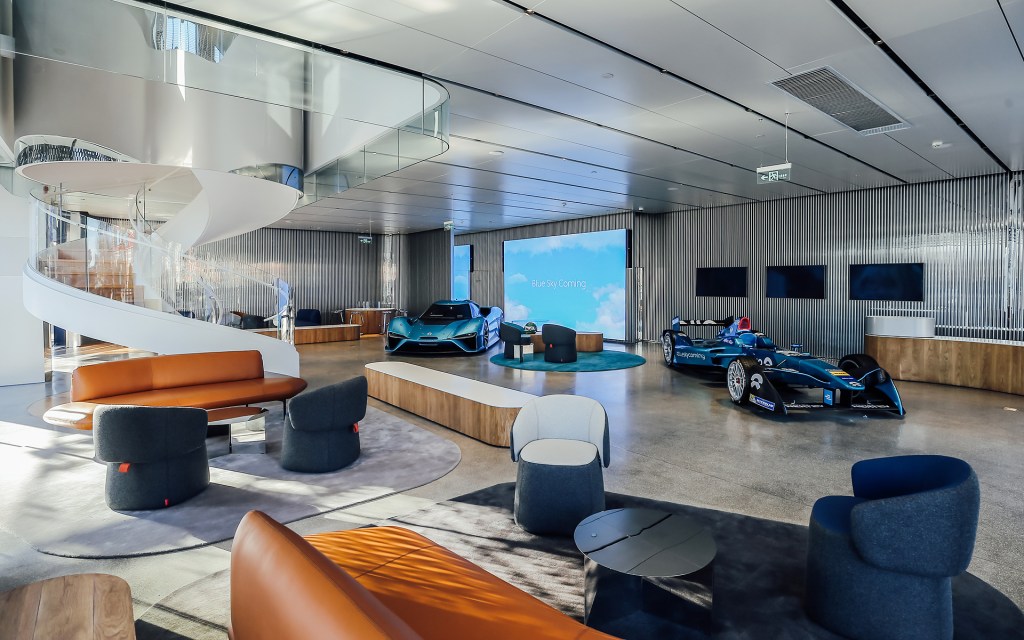 It’s been suggested that time is the ultimate luxury. If so, the car industry faces a major challenge – explaining to owners why they are going to have to spend so much more of it doing the mundane task of refilling their vehicles.

Few of us would list a windswept petrol station forecourt among our favourite places, but fuelling a normal car is an efficient process. Even the largest tank can be brimmed in a couple of minutes; waiting to pay – and resist the offers for multi-buy chocolate bars – often takes longer than pumping the petrol or diesel.

But the widespread move to electric cars is going to turn that equation around. Even the fastest chargers take much longer to replenish battery packs, meaning 30 or 40 minutes of unwanted downtime. For time-poor drivers, this is a major inconvenience – one you can already witness, in the form of bored-looking Tesla owners cooling their heels at Supercharger stations.

NIOClub7, in Tianjin, China (also main picture and below)

The industry’s interim solution is the plug-in hybrid – cars which, having both conventional and electric powertrains, can rely exclusively on liquid dinosaur when there isn’t a charging port handy. But the complexity and weight of two separate powertrains means PHEVs are an evolutionary baby step, and won’t survive much longer into the zero-emissions future than ordinary cars.

Some manufacturers are starting to work on ultra-fast charging systems but these pose huge technical challenges because of the vast heat generated by the required rate of current flow. Others are taking what could be called a more holistic approach to the lost time of recharging, by trying to make it pass as easily as possible. You probably haven’t heard of NIO, because it doesn’t sell cars outside its Chinese homeland – yet. But in the global list of premium EV makers it already sits in the number two slot, only behind Tesla, having delivered 15,000 of its ES8 electric SUVs in China since sales began last year. A second model, the more affordable and more athletic ES6, is going to be launched this summer and will push those volumes far higher.

Having driven both NIOs on a racetrack near Tianjin, I can confirm that they already deliver Tesla-like performance and what could be better-than-Tesla build quality. But the brand is about more than just its cars. NIO wants to be a high-end club, with owners offered access to a network of what are called NIO houses, upmarket spaces where they can wait, work or take part in organised activities including work-out sessions and kids’ activities. In the urban areas where most of its customers live, NIO also offers a concierge service, sending out drivers to pick them up and then return them fully charged.

NIO’s other innovation tries to eliminate the inconvenience of recharging altogether with battery swapping stations. The idea sounds simple, but the reality is hugely complicated. Other manufacturers have considered battery swapping but have abandoned the idea as too difficult, not least because battery packs now play a major structural role in most EVs. But NIO has delivered it and the process – which I saw working at a swap station in Beijing – is pretty much effortless. The car is lifted on a ramp and a robot arm swings out to detach the old battery from underneath the car, motor it away and then replace it with a fully charged one. It takes less than five minutes, pretty much the same time as a conventional fuel swap.

NIO already has 125 swap stations in China and they are being used heavily. The company had around 12,000 of its cars on the road at the time of the last Chinese New Year and reckons that a third of these travelled over 1000km – 620 miles – during the two week holiday period, with a significant percentage of those making at least one stop at a swap station.

Don’t get too excited. NIO has no detailed plans to take its cars outside China right now, meaning that EV drivers in other parts of the world will continue to worry about finding a free charging point when away from home. But it’s good to know that it doesn’t have to be like that.