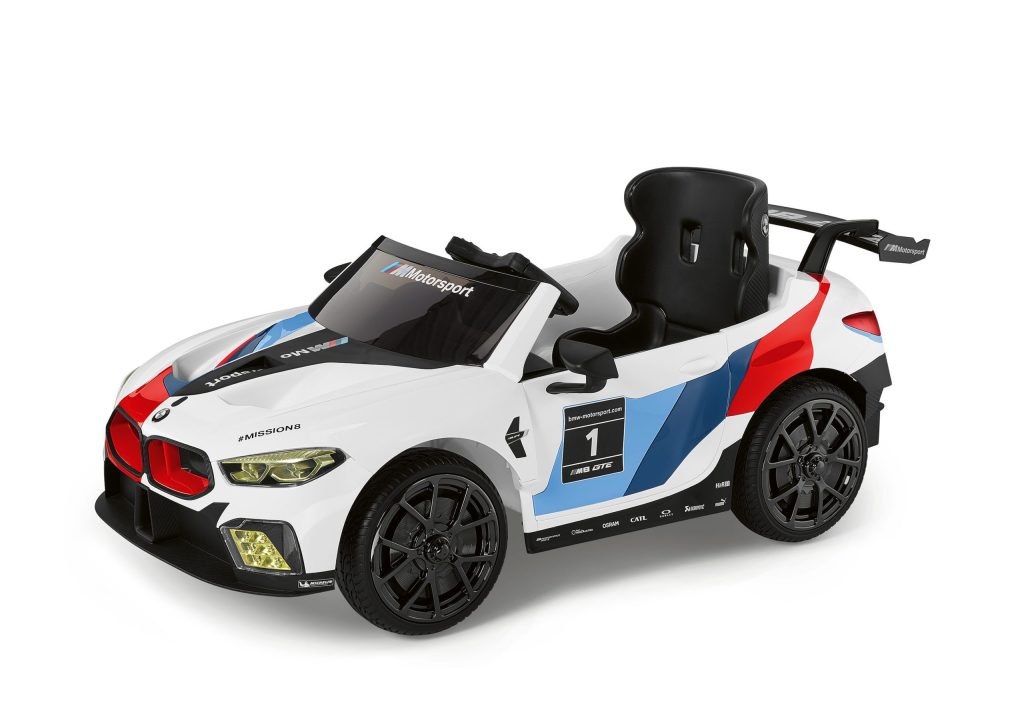 It’s never too early for your first Beemer, and now even the tiniest tots can drive one of their own.

Released as part of its growing Lifestyle Collection, BMW has developed an electric, miniaturized version of its M8 GTE racecar just for kids. From the paint job to the yellow tinted headlights to its rear wing, all of the car’s design elements are taken directly from the original model.

Ramping up the realism even further, its doors open just like the genuine article as opposed to requiring adults to hoist a child in place. Its auditory experience is nothing to sneeze at either. Complete with a bevy of realistic engine sounds, it also features a built-in MP3 interface so any small driver can enjoy favorite tunes for the duration a given ride.

The original BMW M8 GTE on the raceway. Courtesy of Frolphy/Shutterstock

If it’s anything like the i8 Kiddie Car that’s already available, the miniu car could have the same 12-volt battery propelling it along. That model has speeds that top out at a safe 2.5 miles per hour and can operate for up to two full hours before requiring a recharge.

No official pricing has been released for the pint-sized M8, but the i8 Kiddie Car retails for £240 with the M8 anticipated to be in the same ballpark.

Whatever the final price turns out to be, it’s guaranteed to be a steal compared to the original. Developed for motorsport racing, the M8 GTE made its debut in January 2018 at the famous Daytona track and raced again a few months later in the legendary Le Mans contest. “It’s the most elemental, determined race car we have ever built,” said Michael Skully, head of designed for BMW Motorsport in a statement.

Outfitted with a V8 turbocharged engine, the M8 could achieve between 500 and over 600 horsepower, depending on the specifications of a race. All of the engineering that went into its creation continues to inform every model the automaker has developed since. Now your kid can enjoy their own miniature version of the racer—albeit with slightly less horsepower.