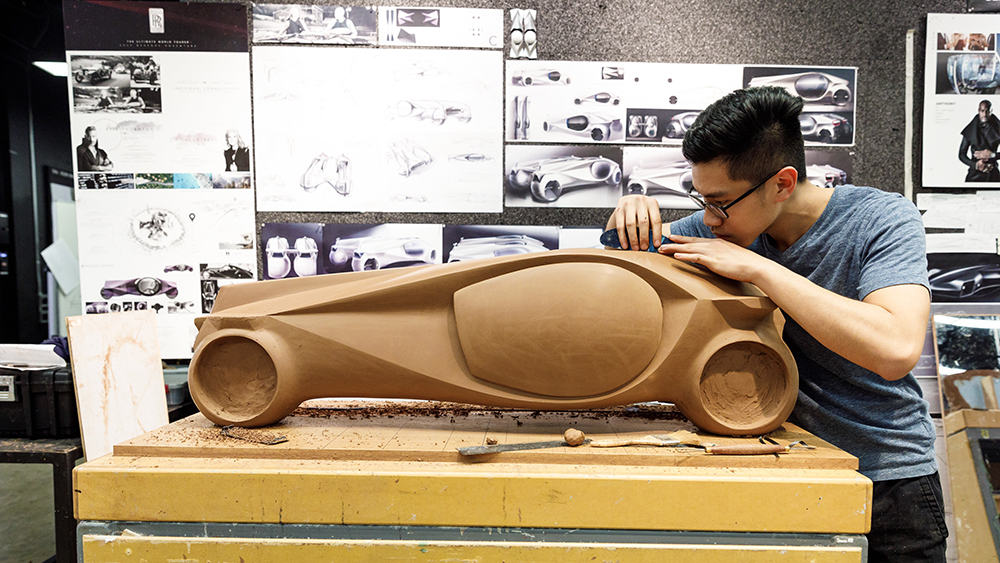 Early auto manufacturers focussed on functionality over aesthetics, but it wasn’t long before marques and their customers valued the automobile as much for its emotional allure as for its practicality. Before and after World War II, formal courses of study on the subject began to emerge, drawing from the disciplines of fine art, architecture and industrial design, each reflecting the culture and character of its environs. Today, transportation design is more global than ever, and with many aspiring artists in the field vying for so few coveted spots, top students flock to the handful of institutions that have produced some of the biggest names in the business. There is no denying the influence these programmes have on the automotive world.

RCA is celebrated for its master-of-arts degree in Intelligent Mobility, a programme recently redesigned and renamed to tackle the increasingly changing role of automobiles and, well, mobility. An alum since 2003, Robert Melville is now the design director for McLaren and says the programme taught him to embrace different types of people—and their criticisms. “It really opened my mind,” he says. “The lesson was not to see others’ opinions as a threat but a challenge.” Melville says the most important thing he learned during his studies was how to conceptualise and articulate the story of a design, which he describes as the “key to a product’s success.”

In addition to the curriculum, the school has also established the Intelligent Mobility Design Centre, a multi-disciplinary research lab that focusses not only on designing vehicles but also on solving related societal problems. “Issues like autonomy are changing the industry radically, and no longer can we just look at the style of cars,” says Dale Harrow, director of the centre. “We are moving from product-centered to service models, and this will change the types of issues facing transport design. We need to maintain the traditional design skills but enhance them.”

For Melville, thinking beyond the automobile is crucial in a dynamic industry. “All of the design schools produce an excellent standard, teaching the basic skills such as 2-D and 3-D software. The key for me is for students to ‘think different’ and [learn] how to identify and reframe problems to deliver fresh solutions,” he says. “The ideas are what will make their portfolios stand out from the crowd. And now more than ever, this will be essential in a world where the motivation to buy a vehicle is evolving quickly.”

Founded in 1930, ArtCenter originally offered programmes in advertising, publishing and industrial design. In 1948, the automotive-design programme was formally organised on the school’s old campus in downtown Los Angeles and, because of its location at the epicentre of California car culture, quickly became the incubator for the industry’s top design jobs. “Back in the 1950s, this was the only game in town,” says Stewart Reed, dean of the transportation-design programme. “There are other schools, but none with the legacy that ArtCenter College of Design has.”

As for the school’s approach to the automotive arts, personal expression is at the core, according to Marek Djordjevic, an adjunct professor who designed the Rolls-Royce Phantom VII. “No aesthetic is being pushed,” he says. “Quite the contrary, the whole point of the design teaching effort is to encourage originality and individual creativity, both stylistically and conceptually. Design is the balance of art and engineering.”

Michelle Christensen, lead exterior designer for the second-generation Acura NSX, says the location was as much a draw for her as the programme itself. The best design schools share a closeness—both in proximity and relationship—to the car-company studios around them, and ArtCenter is no exception. “Many of the instructors I had were actively designing and managing in the Southern California studios,” Christensen says. “It provided exposure to people currently working in the auto industry and created a great opportunity to develop relationships and understand real-world processes and challenges.” Christensen, who graduated in 2005, says ArtCenter taught her to test her limits and to keep it together when things got heated. “For my role on the Acura NSX, staying cool and collected in a pressure cooker was critical. It was an exciting and politically charged project, with very high—and sometimes conflicting—expectations globally and, of course, huge shoes to fill. My education taught me to stay focused on the goal despite the noise.”

Located in the heart of Motor City, the College for Creative Studies (CCS) enjoys a strong, symbiotic relationship with America’s automakers. Ed Welburn, former General Motors vice president of global design, once said, “The entire auto industry here is dependent on CCS.” William Mangan graduated in 1999 and went on to lead the interior design of the third-generation Ford GT. Now working on the forthcoming Bronco, Mangan says the quality of work he saw as a prospective student there compelled him to sign up. “I vividly remember touring the campus prior to my decision and stumbling on a room filled with automotive renderings from the junior-level class and being blown away,” he says. “That trip cemented in my mind the calibre of work and teaching I would be exposed to.” As with the other schools mentioned here, CCS collaborates closely with car companies and industry leaders to recruit and train top talent through design competitions, mentorship opportunities and outreach programmes to students as early as high school. “Our classes were taught by working automotive designers from the Big Three,” Mangan recalls. “Having direct access to professionals who taught from their daily experience was a difference-maker.”

Getting a job with a manufacturer is not the only mark of success in the design field, as many students go on to work for some of the industry’s largest suppliers. Graduates of CCS’s Color & Materials Design programme, for example, have found jobs with Haartz, which makes many of the materials used in vehicle interiors, and BASF, the chemical company that produces much of the paint found on today’s cars.

At the northern edge of the Black Forest sits Pforzheim, the home of one of Germany’s largest public universities of applied science. When you consider the school’s close proximity to Stuttgart, it’s no surprise that many of its graduates have gone on to work for the likes of Porsche and Mercedes-Benz, which both have their headquarters there. “When I started my studies in 1984, Hochschule Pforzheim School of Design was the only German, and maybe even Continental European, design college with a high reputation,” says Steffen Köhl, class of 1988 and now the director of advanced exterior design for Mercedes-Benz. Köhl has worked on such models as the SLR and CLK and now leads the charge for the company’s international design studios, series production vehicles and concept cars such as the EQ Silver Arrow shown in 2018 at Pebble Beach, the F015 Luxury in Motion, the Mercedes-Maybach Ultimate Luxury and the Vision Maybach 6 coupe and cabriolet.

To help pre-empt the tug-of-war that often takes place between designers and engineers in the real world, Pforzheim teaches students from both disciplines to work together early on. “I also appreciated a lot that courses for drawing, painting and sculpting were part of the programme,” Köhl says. “It is essential that a designer knows multiple arts, especially when you work for a luxury brand like Mercedes-Benz.” Köhl underscores that industrial design training provided an important foundation for his future work. “This combination was unique and gave us a complete picture of design and how to grow in it.”