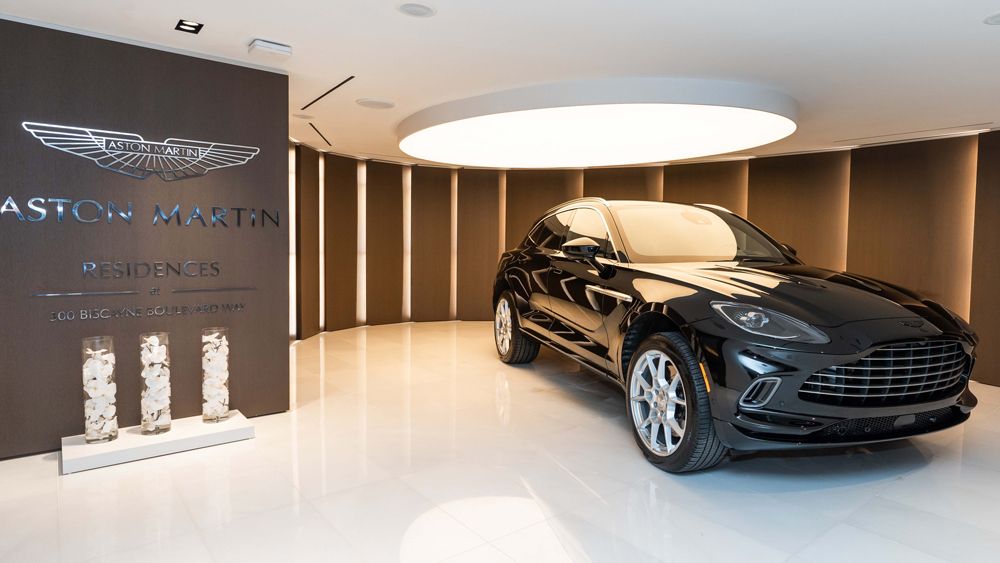 That’s why the first DBX to be built for a customer in the US has just been delivered to 300 Biscayne Boulevard, where Aston Martin’s stunning sail-shaped, glass-and-steel tower is rising up into the Miami skyline.

“There’s so much excitement among our buyers to finally get to see and test drive the new DBX,” says Alejandro Aljanati, CMO of G&G Business Development, developer of the Aston Martin Residences.

They should be excited. Anyone who buys one of the tower’s 38 ocean-view Signature condos, priced from around £3.95 million to around £5.75 million, gets a DBX to complement their new Aston Martin-designed crib. 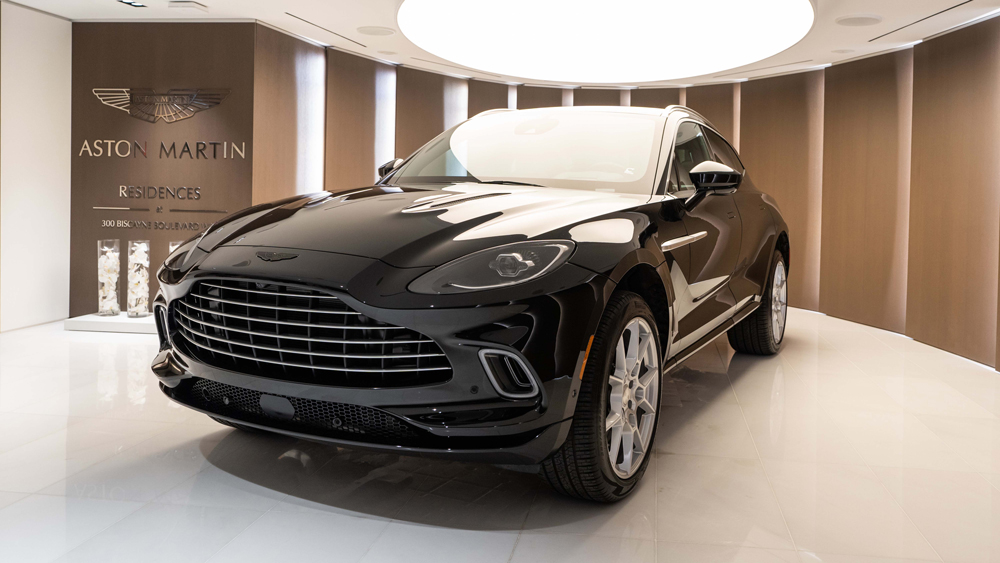 The premiere DBX Riverwalk Edition features Jet Black paint with 22-inch alloys, an Obsidian Black leather interior with Piano Black veneer, contrast Satin Chrome detailing and a few subtly positioned Riverwalk Edition badges. While Aljanati is pretty certain most Signature condo buyers will opt for the DBX as their “freebie,” he’s also giving them an alternative choice of Aston’s two-door DB11, also in Riverwalk Edition spec. In total, just 46 Riverwalk Edition models will be offered, split between the DBX and DB11. And no, other residents won’t get the chance to by a Riverwalk Edition. 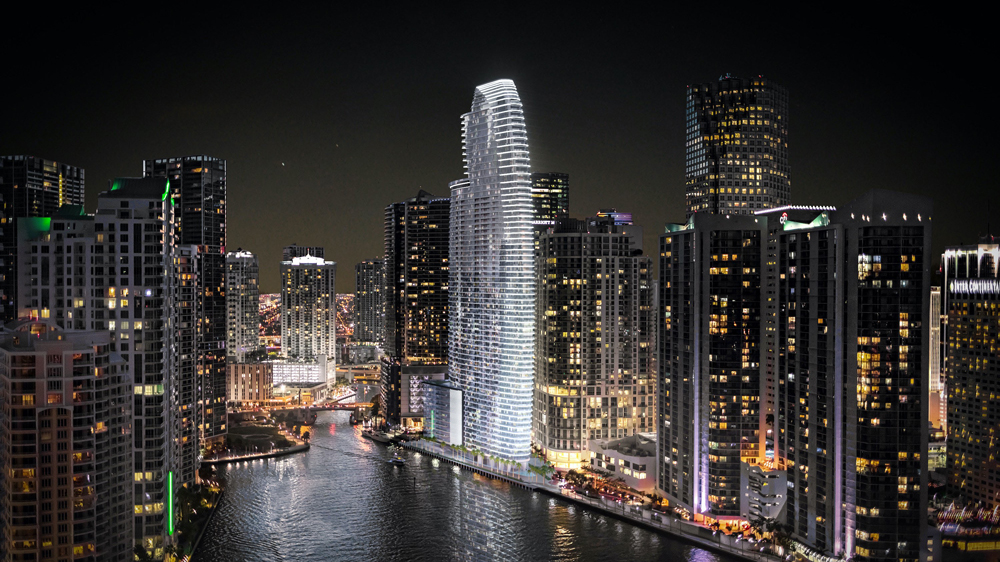 The Aston Martin Residences tower hit the headlines last year when it was announced that its £37.35 million, three-story, six-bedroom penthouse would also include a £1.7 million, 820 hp Aston Martin Vulcan hypercar—one of only 24 to be made.

Although the almost 20,000-square-foot triplex has yet to find a buyer, more than 60 percent of the other 390 homes, whose price start at around £725,000, have already been snapped up. The tower is scheduled to be completed in 2022. 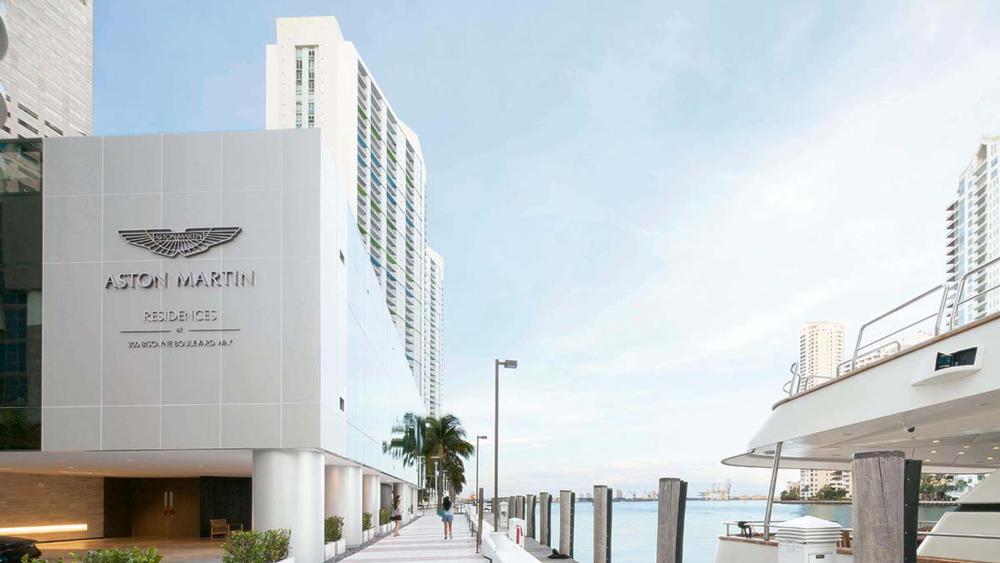 “While 2020 has been a difficult year for the luxury condo market in Miami, we have been able to sell more apartments this year than last,” notes Aljanati.

He credits that success to the tower’s coveted position at the entrance to the Miami River as well as its stunning design by architects at Revuelta Architecture and Bodas Miani Anger. A major part of the allure is also that it has its own superyacht marina right outside. Of course, there’s also the connection to the automaker.

“It is a true partnership we have with Aston Martin, not just a logo at the entrance. The entire building will reflect the company’s sophisticated design, elegance, craftsmanship and concept of “Art of Living,” says Aljanati. 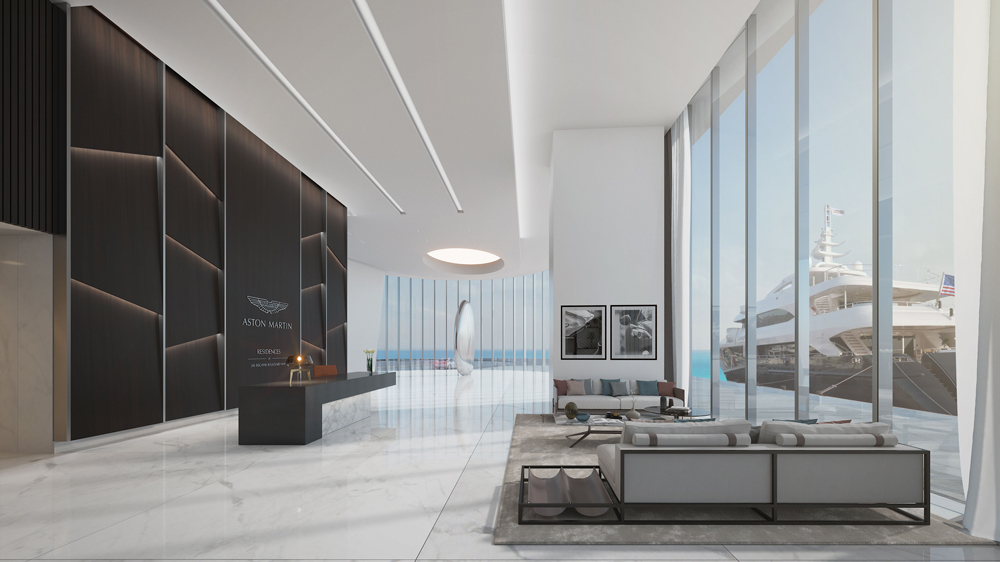 While the building isn’t following the nearby Porsche Design Tower in having parking on the same level as some of its most premium homes, it is planning some pretty pampered automotive storage amenities. Aljanati says he has plans to build at least 10 “super-garages” in the building’s parking structure. These can be designed with the help of Aston Martin’s newly-formed “Automotive Galleries and Lairs” design team.

“These will have the potential to be truly unique spaces for owners to enjoy their cars. They’ll be able to work with Aston Martin designers to create special flooring, special wall covering, special lighting and unique cabinetry,” he explains. 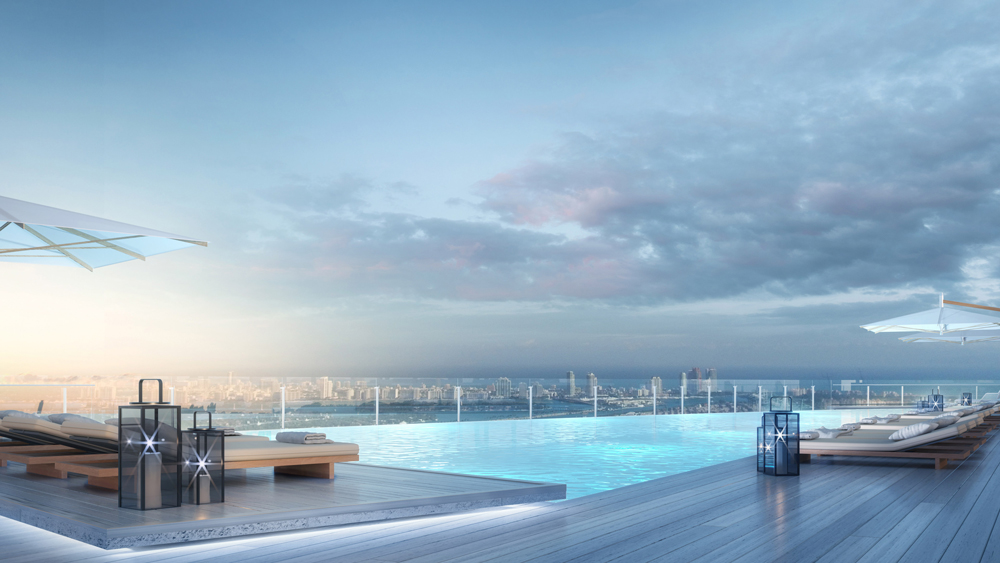 A bird’s-eye perspective of Miami from the pool deck. Photo: Courtesy of Aston Martin Residences.

And to make sure that your DB11, or the penthouse owner’s Vulcan or the just shy of £900,000 Aston Valhalla supercar that one condo buyer has ordered, doesn’t damage a spoiler on the entrance ramp, Aljanati says his architects have created the perfect ramp-angle to avoid costly scrapes.

As for Aljanati’s prediction of how the Riverwalk Edition DBX/DB11 split will go, he thinks the new “Made in Wales” SUV will be the overwhelming choice, stating: “It has the spirit of a sports car with the versatility of an SUV. It’s a perfect car for Miami.”