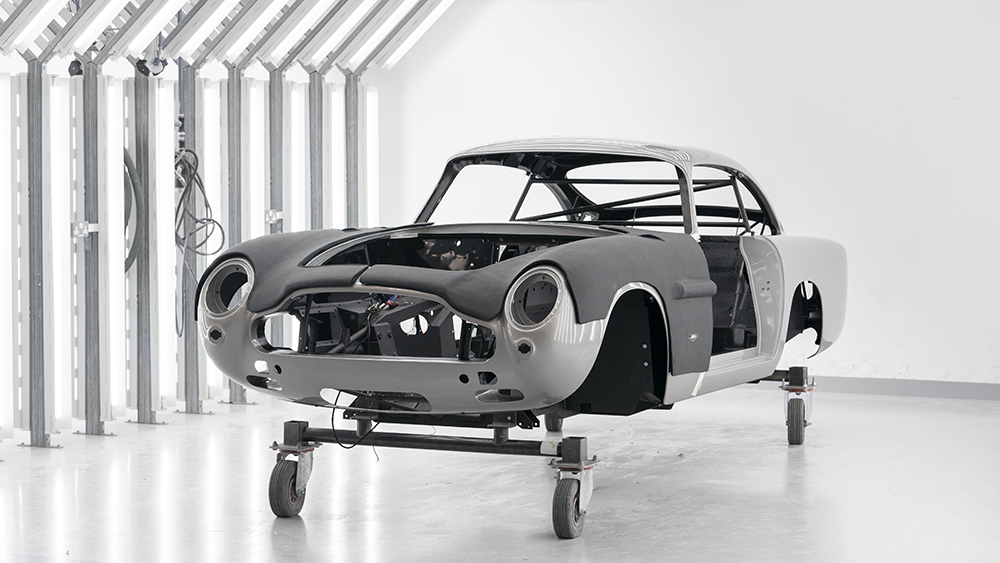 “The most famous car in the world” just proved it’s still got plenty of pull. Aston Martin’s James Bond DB5, which appeared the 1964 flick Goldfinger, is rolling back into production, and the 25 of the limited-edition rides cost around £2.7 million each.

The century-old British marque enlisted the producers of the Bond films, EON Productions, to ensure the spy gear and styling remained true to the on-screen original, which sold for around £5.2 million last year. The new models, originally announced in 2018, are finished in the same Silver Birch paint scheme and feature an identical leather interior and dashboard. In fact, Aston Martin even went so far as to source the exact cockpit instrumentation from the same supplier that built the original instruments in the ‘60s.

But let’s talk about 007’s gadgets. Bond’s car was equipped with a lethal assortment of toys thanks to Q, including an oil-slick sprayer, smoke-screen fogger, a bullet-resistant shield, an ejection seat, a nail spreader, hidden machine guns and more. Of course, the modern successor had to be, well, legal—and thus the gadgets have been updated to function in the real world. For instance, the machine guns won’t actually fire ammunition, but they do appear to work and emit gunshot noises through the speakers for a thrilling effect. Similarly, the oil and smoke sprayers produce simulated substances that won’t cause havoc on the roads.

Unfortunately, there will be no ejection seat or nail dumper—way too dangerous—but there is a spate of other cool secret agent gear, like triple license plates, an under-seat hidden weapons tray, a telephone in the driver’s door, and ‘radar’ which uses modern-day satellite mapping to mimic the old-school navigation screen. Under the hood, the cars will be fitted with a four-liter inline-six engine that delivers around 290 HP.

Aston Martin is hand-building the DB5s in the same Newport Pagnell facility in which the 898 originals were produced between 1963 and 1965. Each car requires a painstaking level of craftsmanship and takes 4,500 hours to build.

“Aston Martin is fastidious about authenticity,” Paul Spires, head of Aston Martin Works, told The New York Times. “And we have gone to very considerable lengths to ensure the equipment in the Continuation cars is as faithful to that seen in the film as possible.”

Indeed, the only major difference between the two models seems to be the price. The 1965 DB5’s base price was around £10,500, while the Continuation model cost £2.85 million. Still, that hasn’t deterred a bevy of ardent Bond fans who have already purchased all 25. The cars are currently being built, and are expected to be delivered to their owners in the coming months.