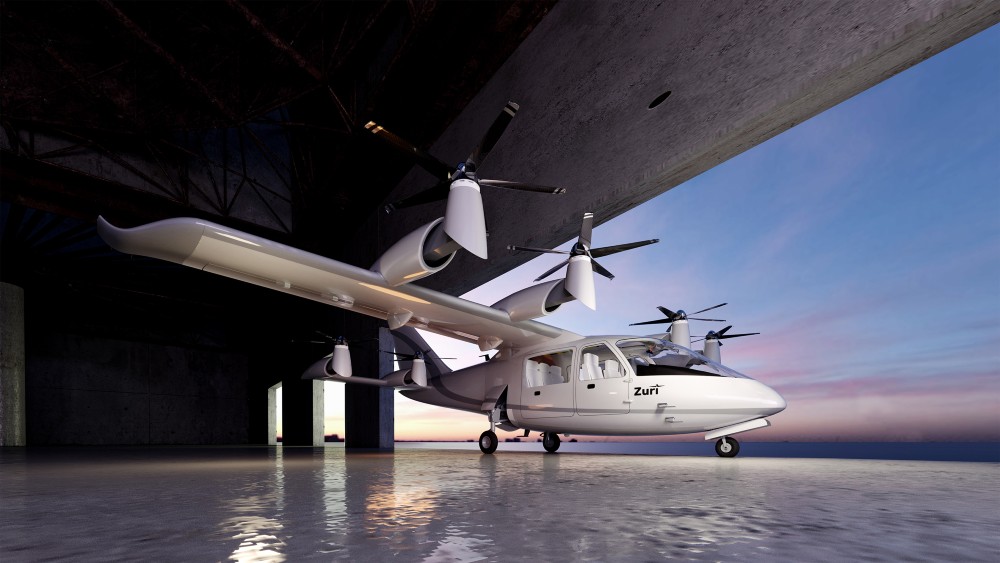 Zuri announced new models of its 2.0 hybrid Vertical Takeoff and Landing (VTOL) aircraft, including cargo and executive versions. The Prague-based company sees both models serving as regional air transport. The aircraft has a 435-mile range, which is extended by the hybrid powertrain, with a 186-mph cruise speed.

The wingspan is 43 feet, with eight independent tilting propellers for both vertical takeoff and landing as well as horizontal flight. The hybrid propulsion combines an onboard turbine generator for powering the eight electric motors and recharging the lithium batteries. The interior is designed to carry four passengers and a pilot in the air taxi model, with a VIP model for three passengers and a pilot.

The company says the aircraft will have a fly-by-wire system with a mechanical backup for controls. It will also offer computerized vision and sensors for safety and enhanced situational awareness.

The aircraft can be used for island hopping because it’s much faster than a ferry.  Courtesy Zuri

“Zuri 2.0 is a significant milestone for us: We’re introducing an aircraft which has significantly better aerodynamics and performance than the original design,” founder Michal Illich told Robb Report. “It still shares the same range, which makes Zuri unique.”
The company is already testing smaller prototypes as it advances the design.

Illich launched Zuri in 2017 after making a sketch of the aircraft. In the last five years, the aircraft has progressed through various phases, including testing the components on a one-seat prototype, showing a technology demonstrator for the first time in September 2021, and completing a successful hover test later that month.

The VIP version will be able to seat three executives and a pilot.  Courtesy Zuri

It’s positioning the 2.0 version as a faster alternative to regional jets, saying it can save time by eliminating travel time to the airport. It also sees the aircraft being an effective way to island-hop, rather than going by boat. It plans to focus on the European market first, then move to North America.