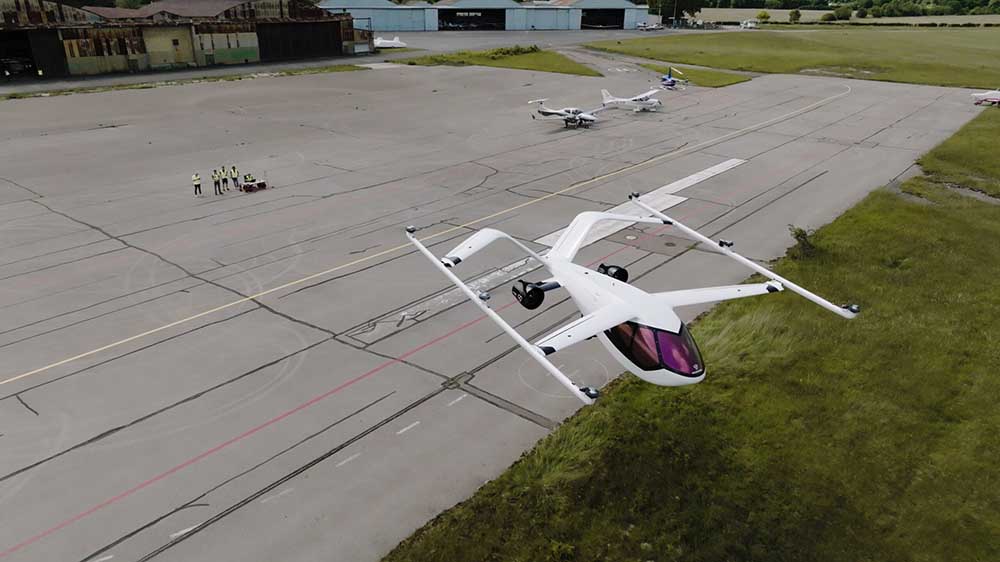 Volocopter isn’t focusing all its attention on one eVTOL; it’s spreading it around.

Less than two months after the VoloCity completed its maiden flight, the German air taxi start-up announced that another prototype, the VoloConnect, did the same in May. The eVTOL’s first flight means the company has now distinct aircrafts currently undergoing testing in the air.

The VoloConnect, which was first unveiled in May of last year, is a fixed-wing aircraft powered by six lifting electric motors and rotors and a pair of propulsive fans. In a video posted online Tuesday you can see the craft take off, hover in the air and slowly manoeuvre around an airfield before landing. The eVTOL doesn’t look like it’s ready to be pushed to its limits—Volocopter says it will eventually be able to hit a top speed of 155 mph—but it’s certainly airworthy.

Unlike the VoloCity, which has room for two passengers, and the VoloDrone, which will exclusively carry cargo, the VoloConnect has room for four passengers. That’s not all that differentiates it from the rest of the Volocopter family, though. The aircraft has also specifically been designed for use outside of cities. Whereas the company’s other passenger eVTOL will mainly fly around a single urban centre—the VoloCity and VoloDrone have ranges of 22 and 25 miles, respectively—the VoloConnect’s 60-mile range will allow it to connect cities with their surrounding suburbs.

“Having a whole family of electric aircraft in the test flight phase is a pioneering feat. . .Our technology platform is the foundation for our family of aircraft approach and has proven to deliver results at an astounding speed,” CEO Florian Reuter said in a statement. “Volocopter is bringing these innovative designs off the ground, into the air, and then to cities worldwide!”

There are plenty of development and regulatory hurdles that still need to be cleared, but the startup hopes to have the VoloConnect in commercial operation by 2026. Don’t worry if that date feels too far away. If things keep progressing as expected, you’ll be able to take a ride on the smaller Volocopter two years earlier—at the 2024 Paris Olympics.