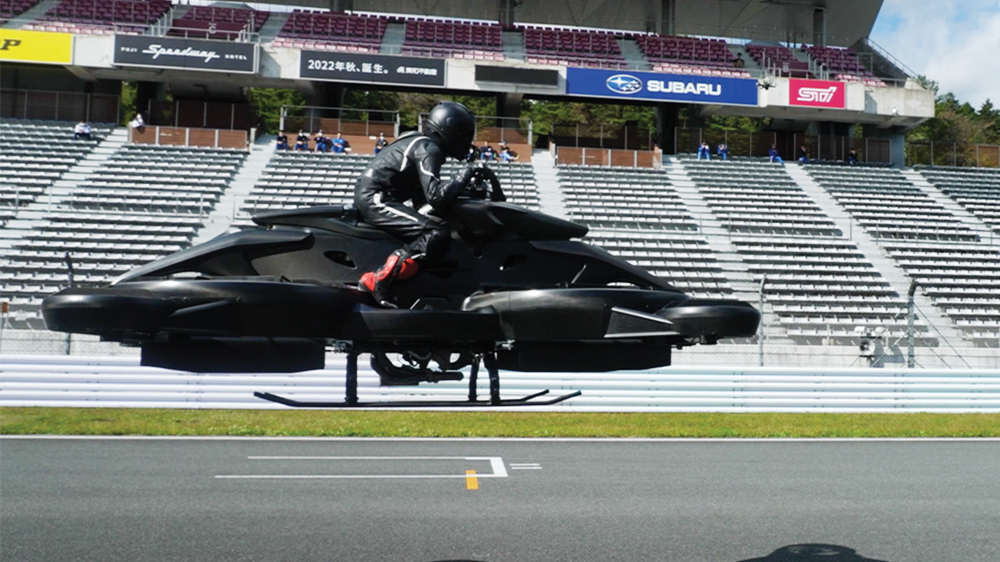 Hoverbikes have been on every sci-fi geek’s wish list since Luke Skywalker rode one through a forest, chased by stormtroopers, in Return of the Jedi. Now, Japan’s A.L.I. Technologies is taking deposits for the world’s first real commercial unit.

The XTurismo Limited Edition features two large rotors in the centre of its frame, with four smaller fans on the outer edges. While the support rotors are driven by electric motors, the main thrust comes from a 228 hp gas-powered Kawasaki motor, a compact performance engine designed for motorcycle competition. It’s part of a drive system co-developed with Toda Racing, which has won multiple race series with its modified engines. The XTurismo’s body, constructed from lightweight carbon fibre, resembles a cross between a sport bike and a Jet Ski. Weighing 660 lbs., it measures about 12 feet long and 8 feet wide, with a height of about 5.5 feet.

Rather than hovering above rush-hour traffic, the XTurismo will be flying around racetracks  A.L.I. Technologies

An automatic control unit with Renesas RH-850 microcontrollers is designed to enhance safe flying, while the cloud-connected edge computing unit manages system controls and software updates. The prototype’s spec sheet lists a top speed of 50 mph, a max hover of about eight feet and a 40-minute range when fully charged. But don’t expect to be soaring above rush-hour traffic anytime soon: With just 200 units produced, priced at around £620,000 each, the XTurismo likely will be limited to racetracks. But it is working with Japanese authorities to develop a street-legal version in the next few years. Eventually, it plans to have all-electric hoverbikes that will be mass-produced for urban use. Besides personal air travel, A.L.I. thinks the XTurismo can be used for disaster-rescue efforts as well as search and rescue.

As one would expect from a Japanese company, reliability and safety are its two main mantras. “Our company is working to achieve an air-mobility society in which traffic accidents never happen,” says Katano Daisuke, president of A.L.I. Technologies.