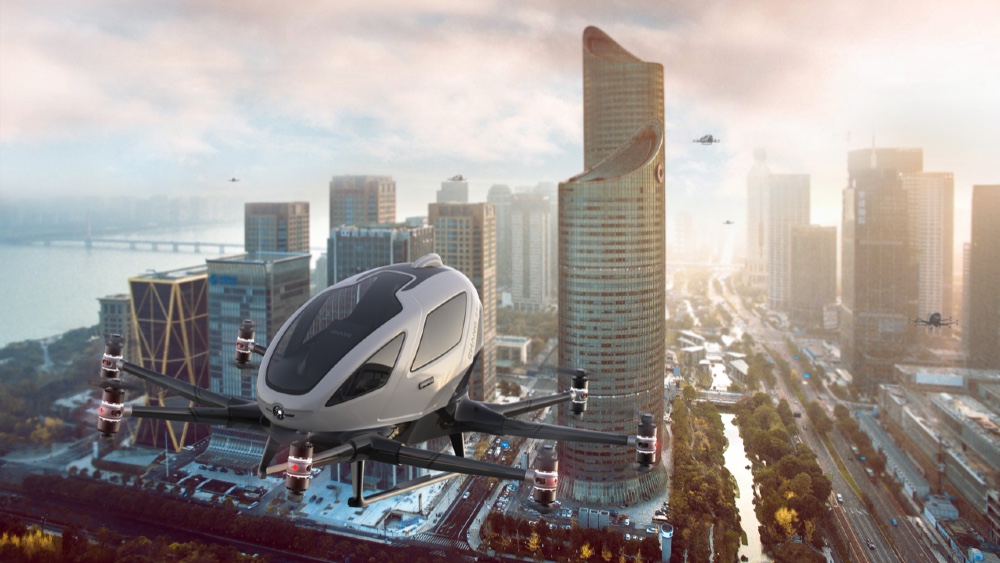 EHang could be the fastest-growing aircraft maker that you’ve never heard of—but that’s about to change. The Chinese manufacturer is moving ahead with electric vertical takeoff and landing aircraft that, unlike many competitors, are autonomous—or what they call autonomous aerial vehicles or AAVs. That means their quad-copters and octo-copters can carry passengers but are not piloted.

The idea may not be as frightening as it initially sounds. Last year, Prince Pieter Christiaan of the Netherlands flew on a 216 AAV in a demonstration flight while the rest of the Dutch royal family watched on the ground. EHang also recently demonstrated its first autonomous flying taxi at a North Carolina airport. Its founder and CEO, Hu Huazhi, can be seen waving from one of its 216 models as it buzzes across the sky.

EHang, now listed on the Nasdaq after filing a $100 million (around £80 million) IPO last November, says it sold one of the 216s in 2018 to a private owner, and another 60 have been sold in the US, Asia and Europe since then. “This delivery marks a major step forward in EHang’s efforts to offer a full-stack solution for the emerging urban air mobility market on a global scale,” Hu told eVTOL.com after the first aircraft was sold.

The numbering on the original 184 AAV stands for one seat, eight propellers and four arms. eHang later demonstrated a larger one-seat, 8-arm, 16-propeller-craft called the 116 and, soon after created the first two-seater, the 216.

Beyond individual eVTOLs for high-net-worth individuals, EHang sees its future in urban air mobility networks that use thousands of autonomous air taxis, coordinated from the ground. It is developing both air taxis and landing sites. The company recently received operational permits for its eHang 216 in Norway and Spain. It also received an Airworthiness certificate from China’s Civil Aviation Administration and says it is working closely with the FAA in the U.S.

Co-founder Derrick Xiong told Robb Report that the company began life by flying drones, but soon saw a more promising future in the AAV space. “EHang was designed with the intention of flying humans,” he said.

Safety remains one of its cornerstones, while the company says the autonomy of the vehicles will allow a mass air-taxi system to be more efficient than having piloted aircraft. Hu and Xiong believe that improved human mobility and smart city management could transform the way large metropolitan areas operate.

EHang has several manned, pilotless autonomous aerial vehicles like the 216, but it also plans to launch a fleet of unmanned AAVs for freight transportation. EHang

The company also has AAVs that are designed for only carrying supplies. It recently performed autonomous missions in Guangzhou, China, during the worst of the coronavirus crisis. Its unmanned AAVs shuttled medical supplies back and forth to a regional hospital without incident.

To prove the autonomous technology, its Ghost drone formation set a Guinness World Record in 2018 for the largest drone display. It flew 1,374 drones in formation for more than 13 minutes, forming different images that stretched nearly a mile. Its kinematic (RTK) GPS technology allows two drones to fly as close as two inches apart, which is then translated to the much larger AAV. That kind of flight precision is something EHang says differentiates it from its competitors.

As it moves forward, EHang says it will continue to work on regulatory issues, infrastructure rollout and trial flights. The goal, says Hu, “is to enable a new era of urban air mobility.”