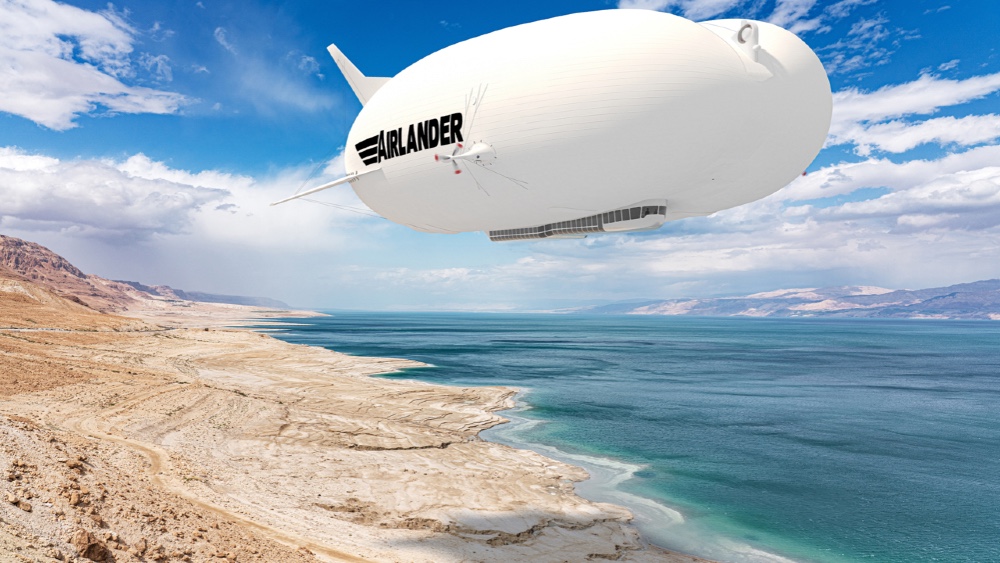 Less than a century ago, the airship was the symbol of elegant travel, gliding silently across the skies. The explosion of the Hindenburg changed the fate of airships in an instant, giving them the reputation of floating bombs.

A number of companies in the U.S. and Europe are trying to stage a comeback for these floating giants, marketing them not only as an antidote to loud, emissions-spewing jets, but also as a much more civilised way to travel.

The Airship 2.0 is certainly a different beast from the zeppelin of 100 years ago. The latest generation relies on non-combustible helium, and bulletproof materials that like vectran, mylar and kevlar to make the balloon both lightweight and durable.

The Airlander 10, which is ready for production, promises a much more civilised way to travel by air than jets. Hybrid Air Vehicles

Companies like Flying Whale in France and U.S.-based Skunk Works, the research arm of Lockheed Martin, are designing airships to carry cargo and medical supplies to remote locations around the world. Skunk Works says its airships could be used as passenger carriers if buyers want to modify them after purchasing the design.

California-based Aeroscraft has a 220-ft. airship in production that uses solar power for propulsion. The company says it can be used for jaunts, such as trips between Hawaiian islands. Aeroscraft forecasts that it will be another three to five years before its airship receives FAA certification for passenger travel.

The company has also been working on concepts like the Neona, a futuristic, donut-shaped flying saucer. The company did not give a timeline for when Neona – more UFO than floating superyacht – might go into production.

California-based Aeroscraft makes a traditional-looking airship, but is also working on the flying-saucer-shaped Neona as a personal sky yacht. Aeroscraft

A U.K. company is leading the charge for creating airships that will undertake passenger journeys, much like a cruise ship or yacht. Hybrid Air Vehicles said its floating goliaths will offer private passenger travel beginning in 2024. These full-featured airships will have lounges, master suites, offices and spas. The company says it will also offer sushi counters or in-room refrigerators for long-distance cruises.

HAV has launched a full-scale prototype of its Airlander 10 and has a much larger airship, the Airlander 60, for transporting cargo. The Airlander 10 has a base price of around £37.8 million, while models with full specs cost an additional £7.5 million to £15 million. The company says it has 15 letters of intent for the airships, though it has yet to sign any private individuals. Luxury travel groups plan to use them for safaris, hopping from one camp to the next, or another operator wants to fly the airships from Svalbard, Norway, and land near the North Pole.

Since airships don’t need runways, they are perfect for out-of-the-way destinations or hopping between private islands. These levitating leviathans can reach 300 feet in length, with cabin space of about 150 feet. They’re much slower than aeroplanes, though they still cruise at about 80 mph.

Flying Whale plans to use its airships to ferry cargo and medical supplies into remote regions. Flying Whale

“Our ability to operate without runways means that we can fly point-to-point,” company spokesperson Rebecca Zeitlin told Robb Report. “That means that someone with an estate outside London and a chateau in the French countryside can make a much more direct journey than London to Paris.”

The airshipsare delivered with helium and are topped up every year as part of the regular maintenance schedule. “They’re rather like a superyacht, with the same level of luxury inside,” says Zeitlin. “We like to think of it as a fast yacht rather than a slow aircraft.”