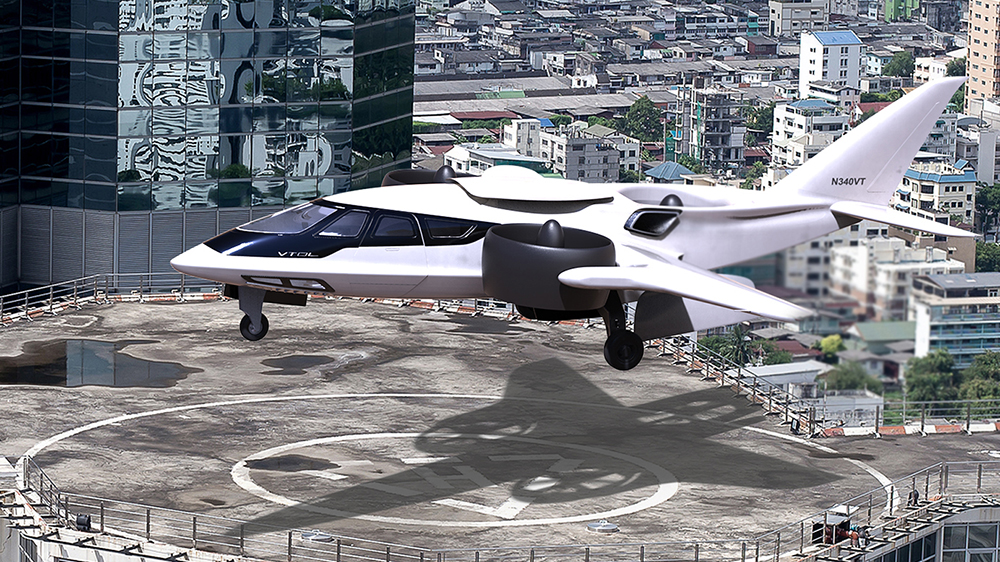 XTI Aircraft doesn’t want you to confuse the TriFan 600, the vertical takeoff and landing (VTOL) aircraft that it’s developing, with a tiltrotor such as the Leonardo AW609. According to XTI, a Denver company that was established in 2012, a tiltrotor is a essentially a helicopter with wings, whereas XTI’s aircraft is essentially a business jet with VTOL capabilities.

Truth be told, the TriFan 600’s projected capabilities are more comparable to those of a turbopropthan a business jet, but it will be able to reach 29,000 feet in only 11 minutes, and it will get up to speed in just 90 seconds, according to XTI. It also will be capable of landing on and taking off from any helipad-sized paved surface.

“XTI’s aircraft is essentially
a business jet with VTOL capabilities.”

The XTI TriFan 600 is basically a business jet with VTOL capabilities. Photo: Courtesy of XTI

The TriFan 600 will seat four passengers in a pressurized cabin that, XTI says, will offer the same level of comfort as an airliner’s business class. A fifth passenger can sit in the cockpit, next to the pilot. Baggage space won’t be abundant, but there will be enough room for passengers to bring overnight bags.

Seating for four, plus one more in the copilot’s seat. Photo: Courtesy of XTI

Also, notes XTI, the TriFan600 will likely be a lot cheaper than Leonardo’s nine-seat tiltrotor. The estimated price of the TriFan 600 is $6.5 million; according to reports, the AW609, which has been in the works for more than two decades, could cost as much as $20 million (around £15.3 million).

The TriFan’s cockpit and the cabin’s views. Photo: Courtesy of XTI

XTI, which stands for “extended technology and innovation”, evolved from the helicopter company AVX Aircraft, which was established more than a decade ago with the goal of developing a more compact helicopter, one without a tail or tail rotor, and with ducted fans. XTI was formed to work on a fixed-wing aircraft with ducted fans—specifically, one in each wing that rotates to enable the switch from vertical to horizontal flight and back. A third, fixed-position fan is mounted in the rear of the aircraft’s carbon-fibre fuselage. It’s used only for takeoffs and landings and for hovering. When the aircraft is moving horizontally, doors on the fuselage slide closed and cover the fan.

The company has a prototype of the TriFan. Photo: Courtesy of XTI

As of March, XTI had built a 65 percent scale prototype of its aircraft and was awaiting delivery of the electric hybrid engine that will power the fans. The company has been conducting systems tests and ground tests with the prototype and was planning to begin test flights once the engine is installed. XTI, which introduced the TriFan 600 in concept form at the 2017 National Business Aviation Association (NBAA) convention, says it already has received 76 orders for the aircraft. If all goes according to plan with the testing and certification process, the company has said, it expects to begin producing and delivering the TriFan 600 by 2023.