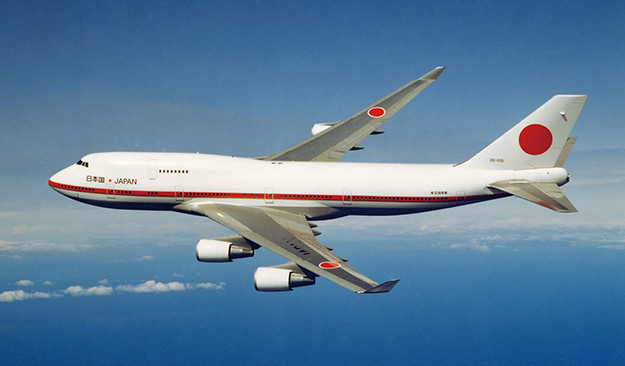 If you’ve been scanning the skies for your next private plane, you need look no further: A very special jumbo jet has just popped up on our radar, and can be yours for a cool £23 million.

The Boeing 747-400, which, until recently, served as Japan’s version of Air Force One is now available for purchase, according to a listing on the aviation trade publication Controller.

Built in 1991, the GE CF6 powered jumbo jet has chauffeured 14 Japanese prime ministers, the country’s emperor, delegates and various VIPs, for nearly three decades. Aside from its prestigious past, the plane is in near-pristine condition. According to the listing, the 28-year-old aircraft has tallied 13,569 landings and accrued just 16,332 hours of flight time—and most of those hours were probably short training flights taken by the crews of the Japanese Air Force.

“One of the lowest time Boeing 747-400s in the world,” the listing reads. “Aircraft has been maintained to the highest possible standard.”

Moreover, this beast makes the supposed titans of the skies—like the Ultrawide Falcon 6X or the Global Express—look like teensy-weensy baby jets. The long-haul airliner—which could normally carry more than 650 passengers in a dense all-economy layout—has been reconfigured with luxurious interiors designed for the enjoyment of, at most, 85 people. (For comparison, the US Air Force One has just 70.)

The custom modifications include a spacious bedroom, an office, a lounge, a unique elevated area for in-flight press conferences and, our personal favourite, a shower. The jumbo jet did have a stateroom and VIP living space which was ripped out before it was brought stateside—apparently, these amenities will be reinstalled better than before. In addition to these bespoke touches, the plane is outfitted with a mix of first- and business-class seating. The aircraft employs a palate of taupes and tans to keep things tasteful and subdued.

This jumbo jet is one of two 747-400s that served the Japanese officials; both have now been retired and replaced with new Boeing 777-300ER jets—which cost around £264 million. Considering its low usage, impeccable condition and distinguished clientele, it could be a bargain—relatively speaking.

Check out more pictures of the jet below:

The two 747-400s that served the Japanese officials Wikicommons