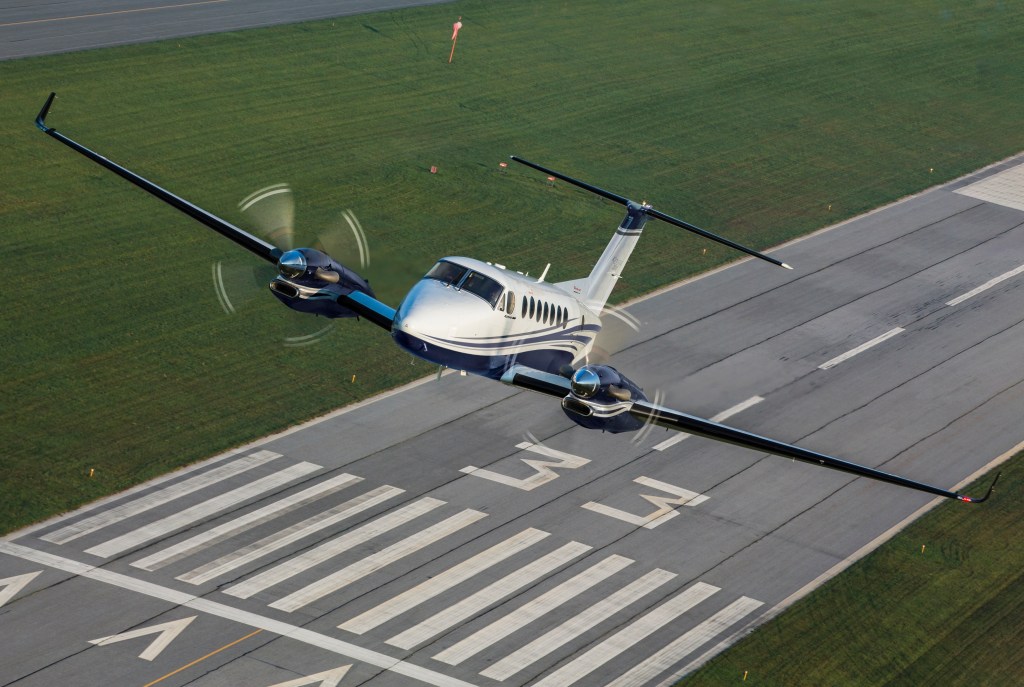 “My mother wanted a bathroom, my wife wanted a pressurised cabin and I wanted a single-pilot, twin-engine jet,” Britton-Harr says. The Piaggio, launched in the 1980s as a twin turboprop that seats two pilots and seven passengers, was Britton-Harr’s answer.

AeroVanti is not the only aviation company capitalising on the benefits of turboprop aircraft—lower costs, larger cabins, and less required runway—that have often been overlooked in favor of jets.

New operator AeroVanti is making the Piaggio Avanti the backbone of its charter fleet.  Courtesy AeroVanti

“Turboprops are great for short flights typically under an hour and for getting into smaller airfields closer to factories and final destinations,” says Nick Davis, CEO of on-demand charter service Instajet. “They don’t fly much slower than jets but are very cost-efficient.”

Turboprops, which use a propeller rather than a jet engine, have been stigmatised over the decades due to their lower range and noisy cabins. But now that the price of Jet A fuel has doubled to nearly $7 per gallon and turboprop technology has advanced—offering more twin-engine models, less noise and greater speeds—there seems to be renewed interest.

“Jets became popular in the ’70s and ’80s for speed and distance, but for any flight that’s within 1,200 miles, the Piaggio is the quintessential aircraft,” Britton-Harr says. “There’s less fuel burn, a larger cabin, and it flies at the same speed as most light jets.”

Turboprops like the KingAir were used for their short-landing capabilities, often flying to off-grid destinations.  Courtesy Cessna Aviation

Turboprops satisfy a specific customer niche, says Kimberly Herrell, CEO of Schubach Aviation, a private jet charter operator based in San Diego. “They typically have more passenger room and luggage space than a light jet and are priced similar to or less than light jets. Turboprops fit a nice niche for larger groups of eight to 10 that want to stay on budget versus paying up for a super mid-size jet.”

Aspen-based charter company EvoJets and Tradewind Aviation in Oxford, Conn., use the Pilatus PC-12—the top turboprop model in the US with 29.2 percent market share, according to research firm Argus International—as their main aircraft. Tradewind recently signed an order for 20 new Pilatus PC-12s, which would bring its fleet up to 38. Idaho’s Avcenter has acquired several new Quest Kodiak turboprops for its regional charter fleet.

Textron Aviation recently bolstered its turboprop fleet with the flagship Beechcraft King Air 360, featuring an upgraded cabin and the latest in cockpit technology.

Wheels Up saw a better use for the KingAir 350i as a fleet commuter in populous regions like New York, New England and Florida.  Courtesy Wheels Up

Turboprops are especially in demand with the growing popularity of short-hop travel to seasonal destinations, said Vinayak Hegde, president of Wheels Up, the on-demand charter company with the largest fleet of turboprops in the US. “We’ve been working with turboprops since the very beginning,” he told Robb Report. “When Wheels Up launched in 2013, we placed the largest turboprop order in history with the King Air 350i. Customers love it. It’s modern, efficient, great for short trips and perfect for hard-to-reach destinations.”

Most turboprops have four hours of flight time, with a sweet spot of two to three hours depending upon the number of passengers and weight of their luggage. The range means that AeroVanti’s fleet typically flies up and down the East Coast. However, it also has routes between Chicago, Houston, Dallas and Aspen, as well as flights to the Caribbean.

“One limitation relative to light jets is range,” Hegde said, “but for many customers that’s not an issue because they’re just making a quick trip.”

Turboprops comprise about a quarter of overall business aircraft activity in North America, according to Travis Kuhn, vice president of market intelligence for Argus International.

“Its impact is sizeable,” Kuhn said. “However, while overall market activity has gone up 15 percent, we haven’t seen a corresponding increase in turboprop activity, indicating that the market isn’t getting larger.”

Not all private aviation companies that rely upon turboprops succeed. AvantAir, a fractional ownership company in Clearwater, Fla., that operated the world’s largest fleet of Piaggio P180 aircraft, went out of business in 2013, due in part to maintenance problems.

The interiors of the KingAir 350i (above) and Piaggio Avanti are sizable and comfortable.  Courtesy Wheels Up

But newcomer AeroVanti is going all in. Currently, the company has eight Piaggios and is under contract for two more. It plans to add two planes each month for a fleet of nearly two dozen Piaggios by the end of 2022. It is also in discussions to acquire 72 new Piaggio Avanti Evo turboprops.

AeroVanti plans to mitigate the maintenance issues that befell AvantAir by opening its own Piaggio-authorised maintenance facilities in Maryland and Florida. The company has also purchased used Piaggio aircraft for parts.

Said Britton-Harr, “We are re-introducing a more efficient model that hasn’t been noticed yet.”

Main pic: Turboprops like the King Air 360 are known for their short-landing capabilities, often flying to off-grid destinations. Courtesy of Textron Aviation.