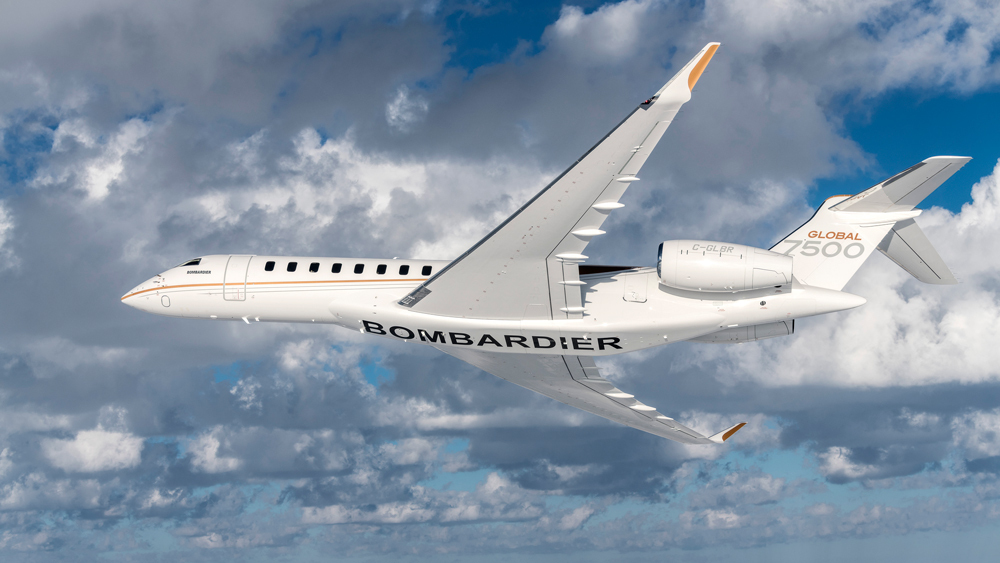 The flagship Bombardier Global 7500, which entered service in December, happened to be at Clay Lacy Aviation at the Los Angeles–area Van Nuys Airport last week. Apparently, this was the second stop on its world tour, and I was the first lucky  journalist to board the Global 7500 in the U.S.

Having escaped the heat and rested in multiple seats amid the coveted air-conditioning on board the Global 7500’s mockup fuselage at the October 2017 National Business Aviation Association show in Las Vegas, I was thrilled to receive the invite to check out the real thing. And comparing the differences between the real deal with the mockup: The real deal sported the new Bombardier Nuage seat with a free-floating base. I know, this sounds like marketing speak. However, the cool thing is that the seat is not connected to a track. It adjusts (forward, backward, recline) on this nifty new base (real-life photo is posted on my Instagram account). Apparently, according to Bombardier, this is the first seat revamp in 30 years for the private aviation sector. Really?

If the type of seat is really the last thing on your list of business-jet priorities, the Global 7500’s range of 7,700 nautical miles (8,861 regular miles) might perk you up. That means take off at LA’s Van Nuys Airport and land in Dubai or New Delhi, or go from New York to Hong Kong, or even San Francisco to Singapore. But if this then makes you worry about the endurance of your crew: Don’t. True to the mockup, the real deal has a crew “suite,” which is a private seat that fully reclines for sleeping and is separated by a sound-barrier privacy door (accordion-style). Oh, and it even has a window.

Or maybe the fact that you can choose the cabin configuration is even more exciting. The very first Global 7500 features the optional master suite (can you imagine waking up on board?) with storage under the bed as well as a bathroom and luggage storage the size of a large walk-in closet; a media room with divan that can become a bed (and has mass storage drawers underneath); dining and living/conference area (with a table that folds out to seat six); the crew rest suite across from the galley (with all the secret hideout drawers and popup storage spaces—and oven, etcetera—as well as sink); and another forward bathroom!

Back to the media room: A couple of years ago, I was invited to participate in a test flight of the Challenger 650 large-cabin business jet that we flew from the Los Angeles–area Van Nuys Airport to Las Vegas and back. We had lunch, a sip of Champagne to toast the joys of private travel, and a test of the 650’s immersive-sound stereo system, with the speakers housed inside the leather walls. The Global 7500 has leather walls, but its larger cabin volume requires more targeted (and super high-fidelity) speakers for immersive movie watching on the 40-inch 4K screen or music for a mid-flight dance party. Not to worry: We cranked up the system, testing both movie and music, and it delivered a solid sound experience.

To control the sound, the movies, the blinds, the lights—all the stuff—the Global 7500 sports a pop-up dial with an OLED display at each seat and bedside. This dial, officially named the “nice Touch cabin management system,” is part of a Bombardier-designed platform developed in collaboration with Lufthansa Technik. And it’s pretty cool. You press it to pop it up and start controlling pretty much everything. The cabin system can also be used via the suite controller touch panel and the nice Touch app. And I don’t want to forget that the nice Touch CMS also provides Ka-band satellite communications for fast internet speeds, allowing for streaming and surfing as if you were on the ground.

The Global 7500 has received approval from Canada’s aviation authorities, the U.S. Federal Aviation Administration and the European Aviation Safety Agency.

I’m sure I’m missing some details here, but I will say this: The world’s largest and longest-range business jet lives up to the hype (at least in terms of comfort, custom configuration and tested performance results). I have linked you all to the technical stories, but I wanted to share what the jet feels like. To summarise: I pretty much decided I could live full time on the Global 7500. The Savills ad would read: 1 bedroom, 2 bath, ample storage, media room with surround sound, dining area for 6, living room, bonus room, clever kitchen layout—and ready to travel.