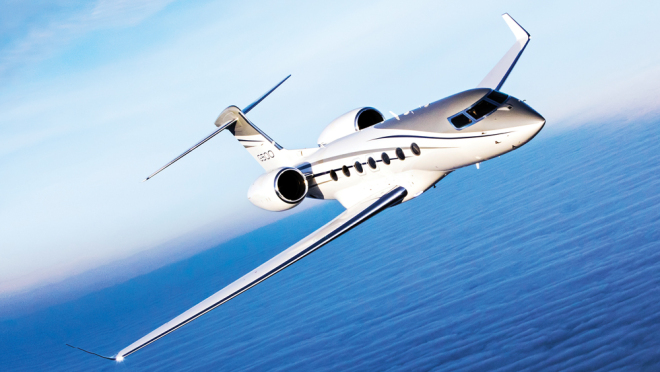 On a recent overcast morning at the Gulfstream headquarters in Savannah, Georgia, I cross the tarmac from the sales and design centre to one of the world’s first G500 business jets. It’s a banner moment for the aircraft manufacturer: the G500 and its sibling, the longer-range G600, are the first new jets from the brand since 2012.

The G500 is a clean-sheet replacement for the G450, the final incarnation of the GIV platform, which had been around since 1985 and was ready to be given the old gold watch. Surpassing its predecessor by nearly every performance metric, the new jet flies further – 5,984 miles compared to 5,005 miles – and faster, cruising at 561mph (Mach 0.85) instead of 528mph (Mach 0.80). And to persuade the number crunchers, its more efficient engines help maintain the same cost of ownership as its forbearer despite the improved stats.

The interior space has grown as well, and now features six feet and four inches of headroom. So what greets you inside? The cabin is 41.5 feet long with an open layout that accommodates a total of 10 seats, a comfy three-person sofa stacked with pillows and a big TV on a credenza facing the aft dining area. The ample 27-inch articulating leather seats are paired with a simple touchscreen interface that appears from the bulkhead after sliding aside a discreet panel and is used for controlling things like lighting, temperature and the entertainment system. However, it’s just a backup plan as most passengers will likely use the Gulfstream app to dim lights or warm the cabin through their smart devices. 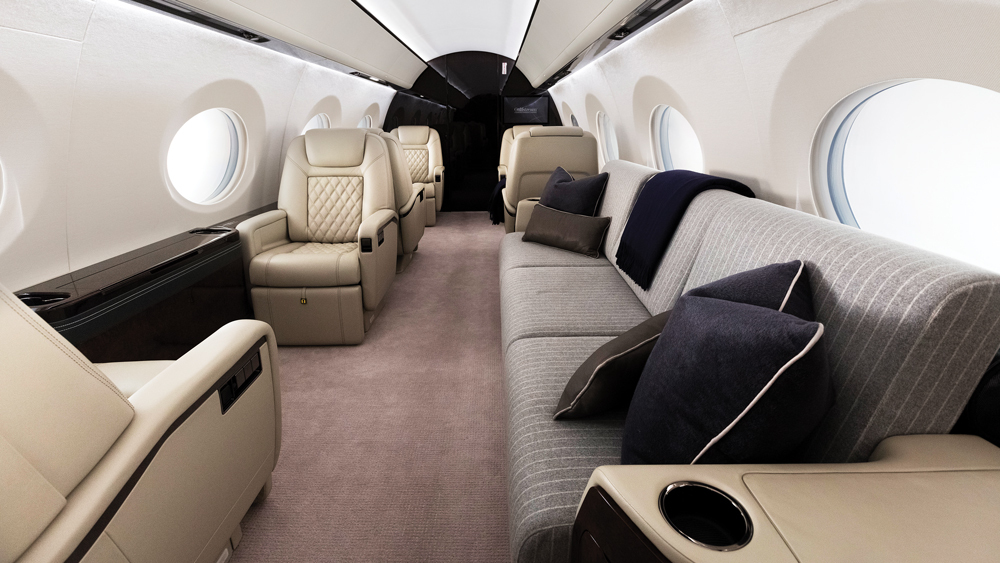 As nice as the G500 is inside, a business jet still needs to get you where you need to go quickly. I got a taste of that speed when the engines first squealed to life and we began to not rumble but glide, seemingly frictionlessly, down the runway with a force that pinned me to my chair and brought a grin of delight to my face.

All that power comes courtesy of two new Pratt & Whitney Canada engines rated for 15,144 lbs of take-off thrust – 1,294 lbs more than the Rolls-Royce engines that powered the G450. Our jet rose above the cloud cover, and light poured into the cabin through its 14 gigantic 28-inch oval windows that “are so big you feel like you could fall out of them”, as our pilot Scott Evans put it. Sitting next to one was like seeing a movie in IMAX after a lifetime of squinting at iPad screens.

When we were free to move about the cabin, I made quick checks of the cockpit, sizable galley and gorgeous lavatory with polished black walls and marble around the sink (my heart goes out to whoever has to clean off the fingerprints after every flight). The standard layout is nothing revolutionary for Gulfstream, and the interior of the model we flew stuck to the aviation industry’s neutral grey palette. If you really want to get personal with your jet, you’re going to want to take it to a completion centre or explore Gulfstream’s in-house customisation options, where the sky is the limit – same with the additional costs. The customisation team can match any type of wood the customer wants with an airworthy counterpart and is able to source items such as specific leathers, textiles and even the flatware from any purveyor the customer may choose.

Toward the end of the journey – a rough loop that passed through four states – I watched the main television’s live feed from various cameras outside the plane. Tuned in to the one mounted on the underside of the aircraft, I was presented with Georgia’s lush green landscape approaching Savannah; the clouds from the morning had almost all burned off.

Clear skies are exactly what Gulfstream is hoping for with the G500, as it fulfils a mission profile largely ignored by the other business-jet brands. Its closest competitor is the Bombardier Global 5000 (a former Best of the Best winner in our US edition), which offers comparable range and cabin dimensions, but it has a lower top speed, can’t carry as many passengers and costs nearly $5m (£3.9 approx) more than the $45.5m (£35.6, approx.) Gulfstream. And consumers seem to be responding: the company already has a backlog of orders for the G500 on the books.