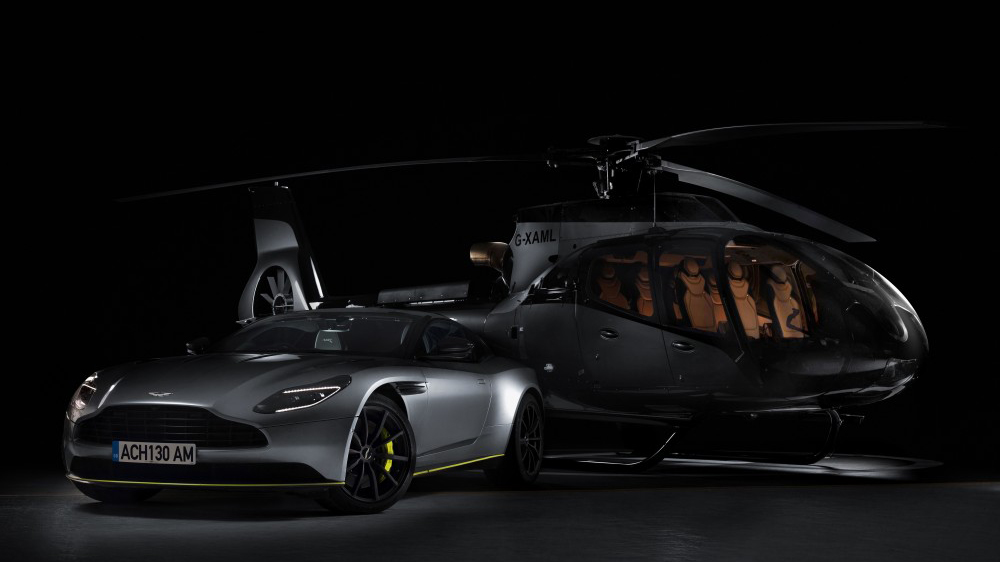 Hopping into the beautifully-contoured driver’s seat of an Aston Martin can make any of us feel like James Bond. The luxury British automaker has a history of fusing impeccable design with serious craftsmanship, both of which are intended to withstand the ravages of time. Now, you can get the same incomparable style in the form of a helicopter that literally takes the marque’s aesthetic to new heights.

Aston Martin partnered with aviation manufacturer Airbus to create a custom helicopter inspired by the carmaker’s most high-performance vehicles, the DB11 in particular. The partnership was announced in December, and the results were unveiled Friday for the first time at Courchevel, the tony ski resort nestled in the French Alps.

The project spent a year in development with teams from both companies collaborating on the daring design exercise. “Applying our own automotive design principles in the aerospace world is a fascinating challenge and one that we are very much enjoying,” said Marek Reichman, Aston Martin’s vice president and chief creative officer when the plans were initially made public. “In recent years we have been learning how to apply our principles to other areas of design, such as architecture, motorcycles and now helicopters,” he said in a statement.

Twelve months later and the finished product is a stunner. The special edition of the ACH130 helicopter has four exterior and interior designs, and it’s the interiors that really showcase Aston Martin’s flair. Every seat is richly upholstered in supple leather (as are the doors) featuring the company’s iconic winged logo. The rest of the cabin is covered in coordinating ultra-suede. The rear of each front seat has the same brogue detailing that can be found in the DB11 to further cement the aesthetic link between the two.

Each exterior is equally polished with a gradient paint job and a contrasting underbelly to ensure it looks good even after takeoff. And the looks aren’t just for show. “The ACH130 Aston Martin Edition is optimally positioned in the market for hands-on owners who draw satisfaction from personally piloting their aircraft and it generates strong brand-loyalty,” said Airbus’ head of corporate helicopters, Frédéric Lemos.

Airbus is already accepting orders with deliveries estimated for sometime in the first quarter of this year.