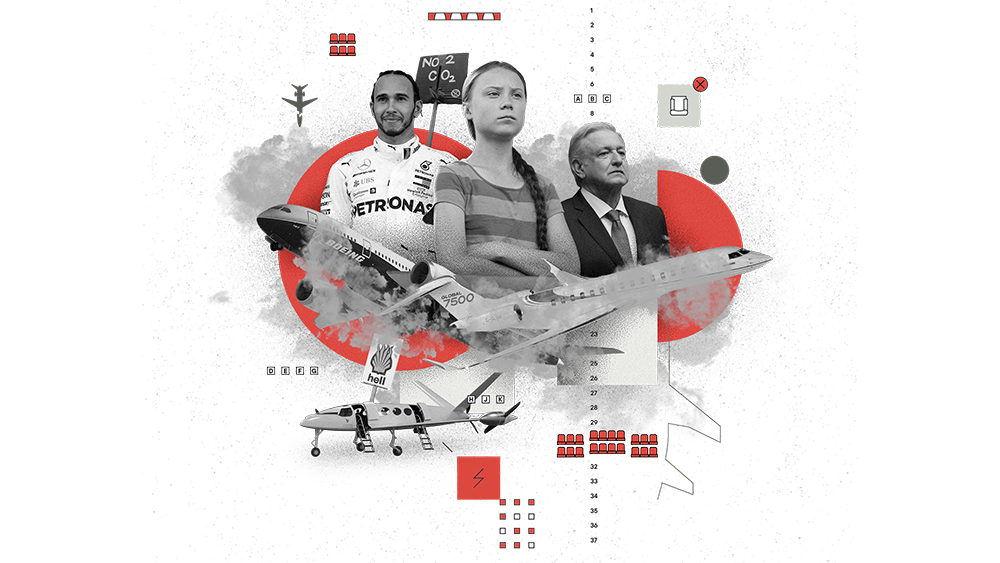 Formula One drivers and world leaders rarely have anything in common but Lewis Hamilton and Andrés Manuel López Obrador, president of Mexico, have together started something of a campaign: the anti-private jet movement. In recent months, each man has dumped his personal plane—in Hamilton’s case, a £16m-plus, candy-red Bombardier Challenger 605 and in López Obrador’s, a £166 million Boeing 787 Dreamliner. Both men cited environmental concerns. Hamilton, a six-time world champion who is a vegetarian and rails against the destruction of the natural world, said, “I want to lead a healthier life.” And López Obrador pledged to cut down on foreign travel, skipping the G20 summit in Osaka this past June.

While Hamilton and López Obrador are acting on moral grounds, companies are ditching their business jets to avoid charges of corporate bloat and bad press. Struggling JCPenney and WeWork have both sold off their multi-million-dollar Gulfstreams. In 2017 General Electric said it would sell its fleet of jets, in contrast to former CEO Jeff Immelt, who sometimes travelled with two planes in case one broke down. Rita Clifton, a former Saatchi & Saatchi director of strategy who has helped to shape the image of some of the world’s biggest brands, says, “No matter what the rational ‘business case’ for executive time efficiency, now more than ever, private planes tend to get an emotional ‘you’re a fat, polluting cat’ response.”

Celebrities—even royalty—who once made private jets such desirable status symbols are now harming the industry, with the media lampooning those who preach environmentalism while continuing to fly private. Prince Harry, the Duke of Sussex, has been dubbed the “Carbon Footprince” by UK tabloids for chartering jets to royal engagements this summer, including a trip to Google’s three-day summit in Sicily last July, the theme of which was… combating climate change.

Extinction Rebellion protest by the Bank of England Gill Allen/Shutterstock

The new mood has shaken the confidence of an industry that has boomed over the past two decades as the ranks of potential clients have grown. On an earnings call in August for Rolls-Royce Holdings, the jet engine-maker’s CEO Warren East addressed concerns head-on. “One thing we’ve noticed over the last six months is a little bit of aviation being set up as the villain as far as environmental damage is concerned,” he said. “Yes, aviation is built on setting fire to hydrocarbons. And we’ve been talking for some time that we… need to wean ourselves off that… quite quickly.”

The facts of private-jet travel certainly make uncomfortable reading. These planes emit up to 20 times more CO2 per passenger mile than a commercial airliner. That’s because wide-bodied commercial aircraft are getting bigger and more fuel-efficient all the time, but private jets can’t match them because they carry so few passengers. The new Boeing 787 and Airbus A350, for example, use about one gallon of fuel per 100 passenger miles. Many private jets burn 10 times that figure, rising to 20 times or more if there is only one passenger on board.

Industry groups point out that while aviation as a whole is responsible for roughly 2 percent of global greenhouse gas, a report by the International Business Aviation Council asserts that private jets are only responsible for .04 percent of all man-made carbon emissions, meaning that commercial aviation has a much greater impact on pollution than private jets do. Banning them wouldn’t do much to curb climate change as there are only about 20,000 worldwide. But when Greta Thunberg, the 16-year-old Swedish eco-activist, is demanding most of us stop flying altogether, these claims are likely to fall on deaf ears.

Could new green fuels or electric planes be the answer? Analysts at UBS say hybrid and electric engines could come into service over the next two decades. Almost half of the 58 private jets at a business aviation trade show in Geneva this year arrived powered by green(er) fuels. At this year’s Paris Air Show, Israeli start-up Eviation unveiled an electric aircraft taxi called Alice that can carry nine passengers for up to 650 miles. But new fuels are in their infancy, and the current heavy batteries required for electric aircraft mean that they will only—eventually—be suitable for short-haul, not long-haul flights.

Which brings us back to square one, says Clive Jackson, founder and CEO of on-demand jet charter platform Victor and one of the leading advocates of reform in the industry. He argues that before new fuels and battery technology become viable, the best short-term measure is to go the extra (air) mile to offset carbon emissions.

Victor, which flies 7,000 passengers on 4,000 flights a year worldwide for an average price of around £19,000 a flight, has made it compulsory for every chartered flight booked through its digital marketplace to offset 200 percent of the carbon emissions. Victor covers the first 200 percent using internationally audited and accredited carbon reduction projects managed by BP Target Neutral, Vertis and South Pole—largely nature-based schemes, such as forest restoration in Brazil and Zimbabwe. But Jackson wants to go further. “We’re asking our customers to top up out of their own pocket and offset by as much as 1,000 percent,” he says. “Let’s face it, they can afford it and the real question is: Can they afford not to?”

It’s a telling question. What Jackson and frequent private-jet fliers dread are punitive new taxes or increased environmental regulation. In Europe, firms and individuals can avoid paying value-added tax on imported private jets by routing purchases through tax havens. President Trump’s tax reforms allow individuals and companies to write off 100 percent of the cost of a new or used private jet against their federal taxes. The aviation industry has made its own commitment to cap net emissions at 2020 levels and to reduce net emissions to half of what they were in 2005, by 2050. But some operators are currently exempt from that. “If we don’t take charge of the challenges now, we may well face regulation that will curb our rights to travel,” Jackson warns.

Some environmentalists welcome carbon offset schemes but warn they are not enough to reverse the damage of flying. Instead, they want people to take fewer flights. Jackson argues this is unrealistic: “Consumers will always want a better life for themselves and their families. It’s a right to be able to enjoy a holiday. But if the result is carbon emissions that will warm the planet, we had better act.”