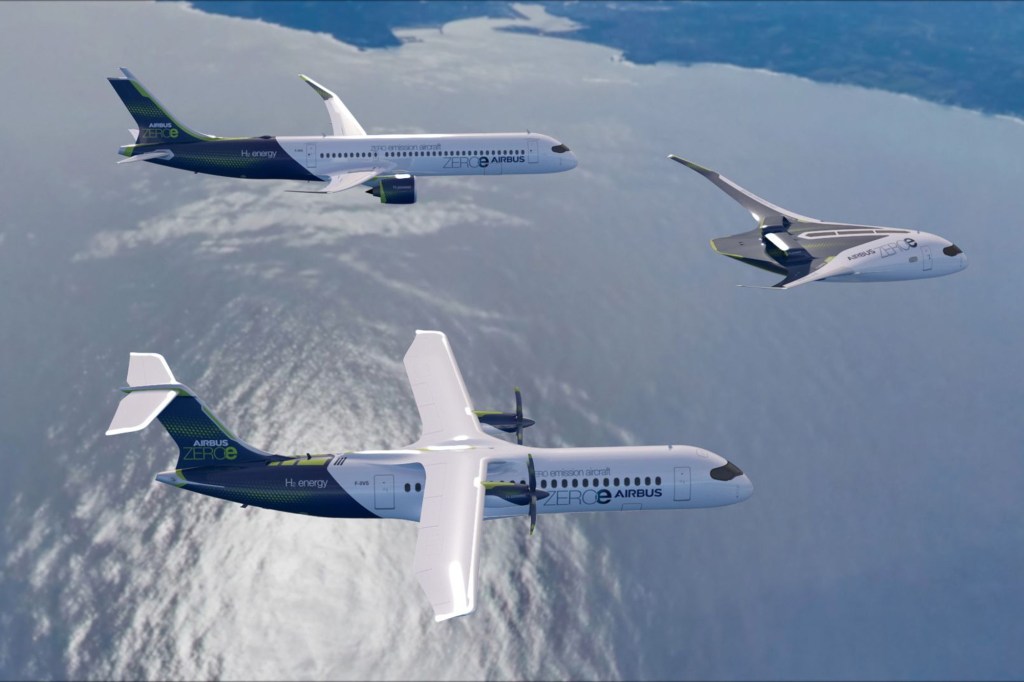 In a move that could change the aviation industry as we know it, Airbus has unveiled concept designs for zero-emissions airplanes powered solely by hydrogen.

The European aerospace behemoth released initial plans for three airplanes that, although appearing quite similar to aircraft currently cruising among the clouds, all operate in a much more environmentally conscious way. Airbus believes that the technology could be viable and in use by 2035 with the potential to cut aircraft emissions by half. That’s a critical figure as commercial planes generated 918 million metric tons of CO2 in 2018, 2.4 percent of the total generated globally by fossil fuels, according to the International Council on Clean Transportation (ICCT). And the United Nations aviation department predicts that number will triple by 2050 if left unchecked.

“As recently as five years ago, hydrogen propulsion wasn’t even on our radar as a viable emission-reduction technology pathway,” said Glenn Llewellyn, Airbus VP, Zero-Emission Aircraft, in a press statement. “But convincing data from other transport industries quickly changed all that. Today, we’re excited by the incredible potential hydrogen offers aviation in terms of disruptive emissions reduction.”

This development comes on the heels of Airbus announcing its goal to develop the world’s first zero-emission commercial aircraft. The company chose hydrogen specifically because it stands apart from many other clean-fuel alternatives, not only because of its viability with land-based vehicles but because of its ability to reduce overall emissions so drastically right from the start. When it comes to aircraft, there are generally two types of hydrogen fuel systems: hydrogen combustion and hydrogen fuel cells. The three nascent plane concepts take a hybrid approach that uses modified gas-turbine engines to burn liquid hydrogen as fuel, while hydrogen fuel cells would create electrical power.

“Hydrogen has a different volumetric energy density than jet fuel so we have to study other storage options and aircraft architectures than existing ones,” said Jean-Brice Dumont, and Airbus engineering executive, said in a press release. “This means the visual appearance of our future zero-emission aircraft will change. These three configurations provide us with some exciting options for further exploration.”