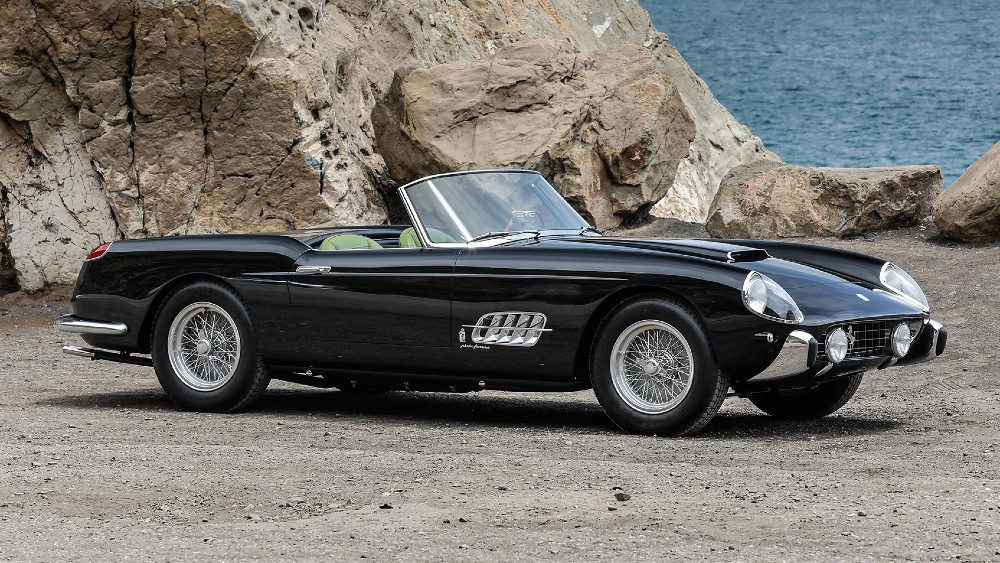 If you needed another reason to get excited about Monterey Car Week, a rare 1967 Ferrari will be there to up the ante.

This year’s Gooding & Company Pebble Beach auctions will see a spectacular 1958 Ferrari 250 GT Series I Cabriolet—once owned by the eccentric aristocrat, playboy and actor, Prince Alessandro “Dado” Ruspoli of Rome—hit the block for the first time. One of only 40 Series I Cabs made, all of which were hand-built by Pinin Farina’s custom workshop, the black two-seater, chassis number 0789, is also one of just four with coachwork details—covered headlights, side vents and bumperettes—made by Farina himself.

Dado, who is said to have inspired Federico Fellini’s La Dolce Vita, was one of the Italian automaker’s VIP clients and the ideal owner for such an exclusive car. For years, he could be seen driving it and his other exotic sports cars around with the likes of Salvador Dalí, Brigitte Bardot, Truman Capote and Pablo Picasso. While the car was clearly a treasured part of his collection, Rusopoli reportedly had to sell it in order to continue paying for his lavish lifestyle. The Series I Cab then passed through the hands of several Italian car enthusiasts throughout the ‘70s and ‘80s, before making its way to the US in the early ‘90s via noted restorer and collector Ron Hein.

Hein’s comprehensive restoration of the vehicle was an award winner, claiming First Class at the 1994 Pebble Beach Concours d’Elegance, Best of Show at the 1996 FCA Vintage Concours in Carmel Valley and the Outstanding GT award at both the 1995 and 1997 Rodeo Drive Concours in Beverly Hills, just to name a few of its many prizes. In excellent condition, the car, which sports a playful lime green interior, is expected to sell for somewhere between $7,000,000 (around £5,640,000) and $8,000,000 (around £6,450,000) when it cruises the block.

Dado’s 250 GT won’t be the only Pininfarina available at Gooding & Company’s Pebble Beach auctions. There will also be a red 1953 Alfa Romeo 6C 3000 CM Superflow IV, a blue 1962 Ferrari 400 Superamerica Series I Coupe Aerodinamico and an Argento Nürburgring 2014 Ferrari Sergio by Pininfarina. The sale will take place on August 16 and 17 at the Pebble Beach Equestrian Center.

And because this is Monterey Car Week we’re talking about, there will be other auctions worth your time as well. On August 16 and 17, Bonhams will be selling Porsches and Ferraris from the collection of late US ambassador Ted Gildred without reserve. Some of the highlights of include: a rare 1956 356A 1500 Carrera GS Coupe, a track-ready 1963 Alfa Romeo Giulia Spider Racer and a matching-numbers 1967 Ferrari 330 GTC. The Bonhams sale will take place at the Quail Lodge & Golf Club in Carmel-by-the-Sea, a small beach city on California’s Monterey Peninsula.