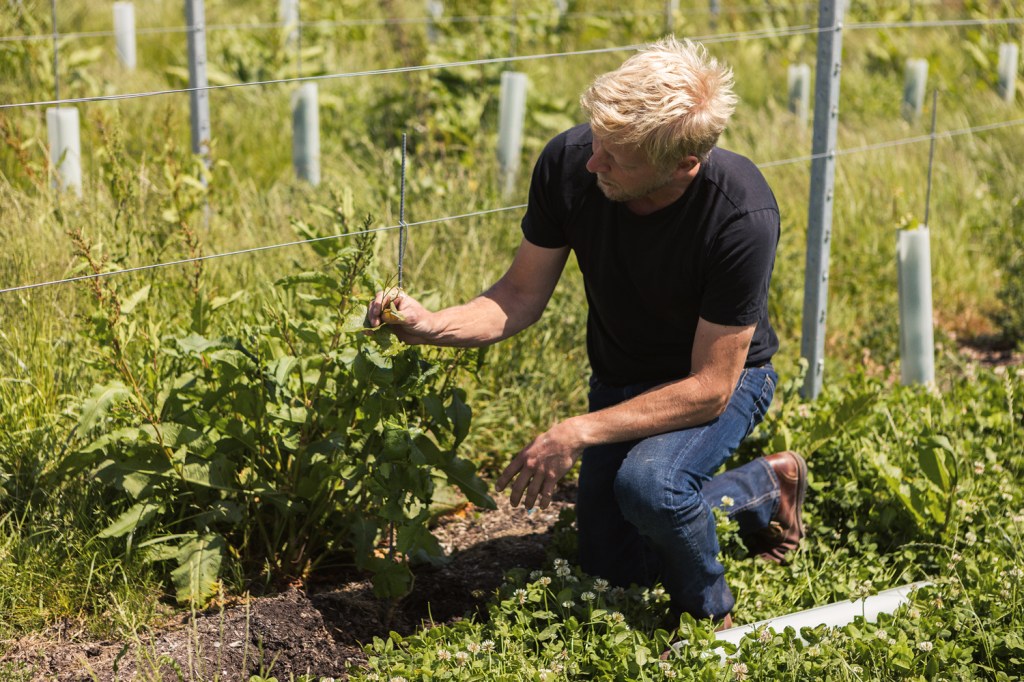 Tsolikouri 2018, Pheasant’s Tears
Georgia
Georgia is, in many ways, one of Europe’s last great lesser-discovered frontiers, a place once veiled behind the Iron Curtain but now flaunting its bountiful assets proudly. It’s among the oldest winemaking regions in the world, perhaps most famed for the traditional ‘qvevri’ – clay vessels that are buried in the ground and used to ferment, age and store the nation’s long celebrated, increasingly well-known-abroad varieties (see below).

John Wurdeman of Pheasant’s Tears has, for years, been at the forefront of the country’s natural wine renaissance, championing traditional methods of making and growing, and – with a few stellar local restaurants also under his captainship – becoming a charismatic ambassador of sorts for the country’s gastronomy scene.

On the time-honoured manner of production he tells us, in characteristically poetic fashion: “Wines made in these earthen wombs take us a on a journey through time, sharing with us all the collective experience of tendrils ascending to the sun and roots penetrating through layers of geology. The child of these celestial and terrestrial worlds is what the Georgians call Ghvino.” 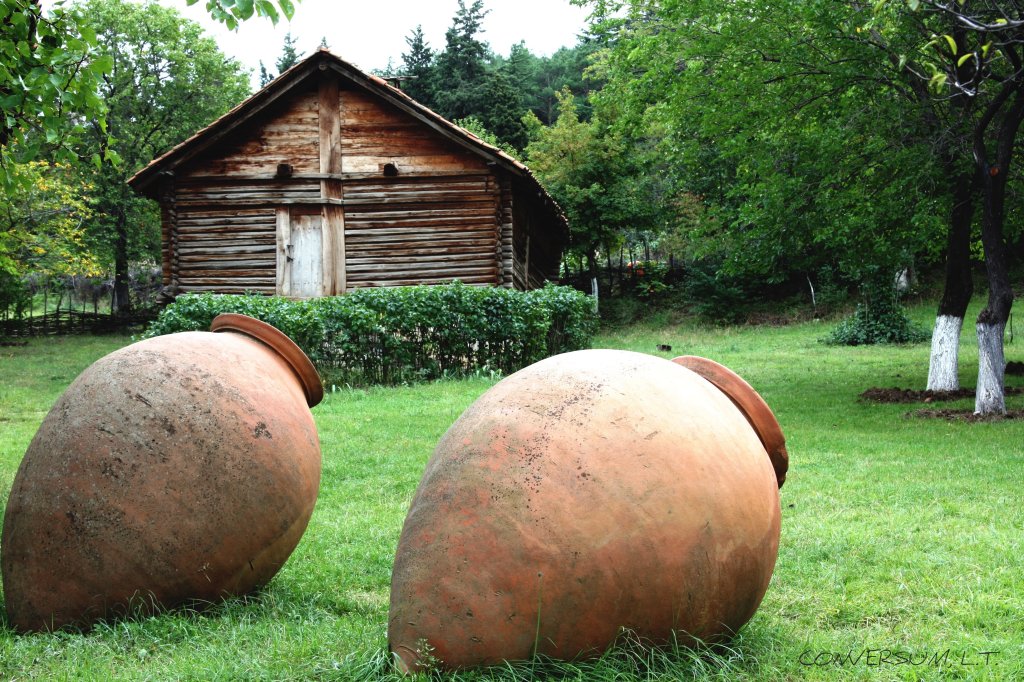 Cutis Deviner 2017, Slobodne
Slovakia
Slovakia may not have the mainstream recognition of other natural winemaking destinations, but this landlocked country is nonetheless making waves, home to some of Europe’s most distinctive and characterful bottles.

Leading the charge is Slobodné, the wine label of Zemianske Sady, a family-run estate (see below) in the western Trnava region. It began producing wine in 1912, but WWII and the rise of communism meant a decades-long hiatus until, in the 90s, younger generations were able to wrestle control back from the state, reintroduce vines and, in 2010, launch their own labels.

It’s a suitably theatrical tale for equally dramatic wines, and the fact that none of the former-city-slicker current owners had any experience in farming when they started out only adds to the romance. The Cutis Deviner – a frisky young orange – is light and dry with citrus notes, capturing something of the clarity and expansiveness of the Slovakian countryside. 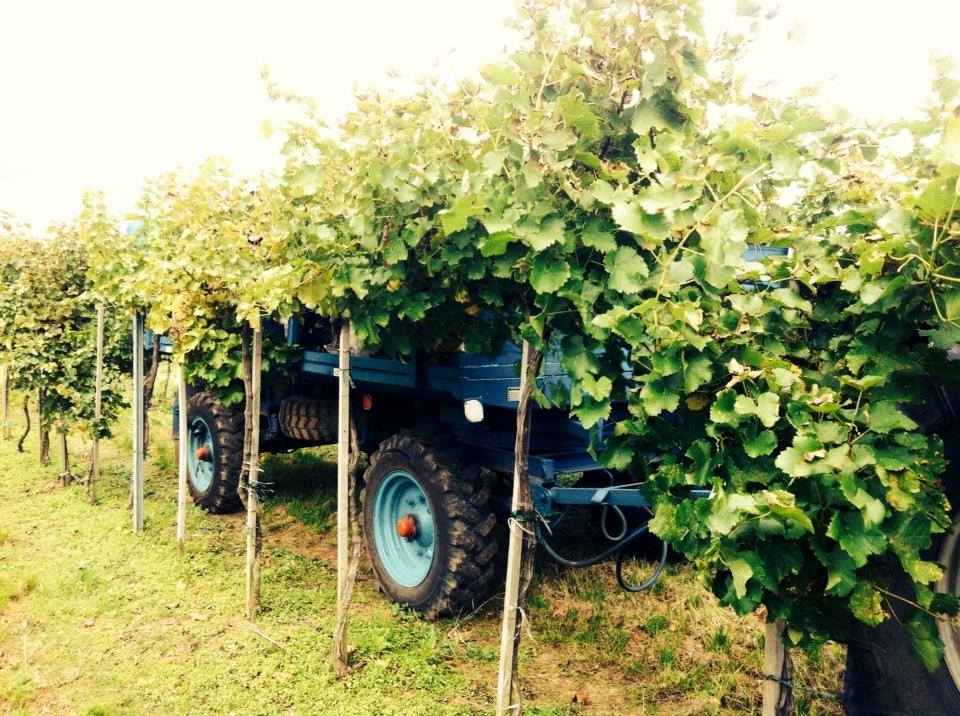 Qvervi White, Tillingham
England
There’s no doubt that English wines once got a bad rap, due in part to a climate perceived as a bit too nippy to produce anything truly drinkable. To this day, less than one percent of wines consumed in England are local, despite the growing number of terrific home soil options – including a handful from other nations of the UK.

On the natural wine front, then, Tillingham is arguably top of the pile, thanks to a combination of traditional production, creative branding and compelling storytelling. The Tillingham estate, headed by Ben Walgate (see main pic, above), is set amongst 70 acres of stately East Sussex countryside – a mixed farm dating from the 13th century, with rooms available for overnight guests and a smashing restaurant. “It’s perhaps more an energy than a flavour that makes a wine identifiable as Tillingham,” Walgate says.

For his Qvevri White, he transplanted Georgian technique to our less temperate isle. The result is a subtle wine with bright acidity, powerful aromatics and plenty of texture. 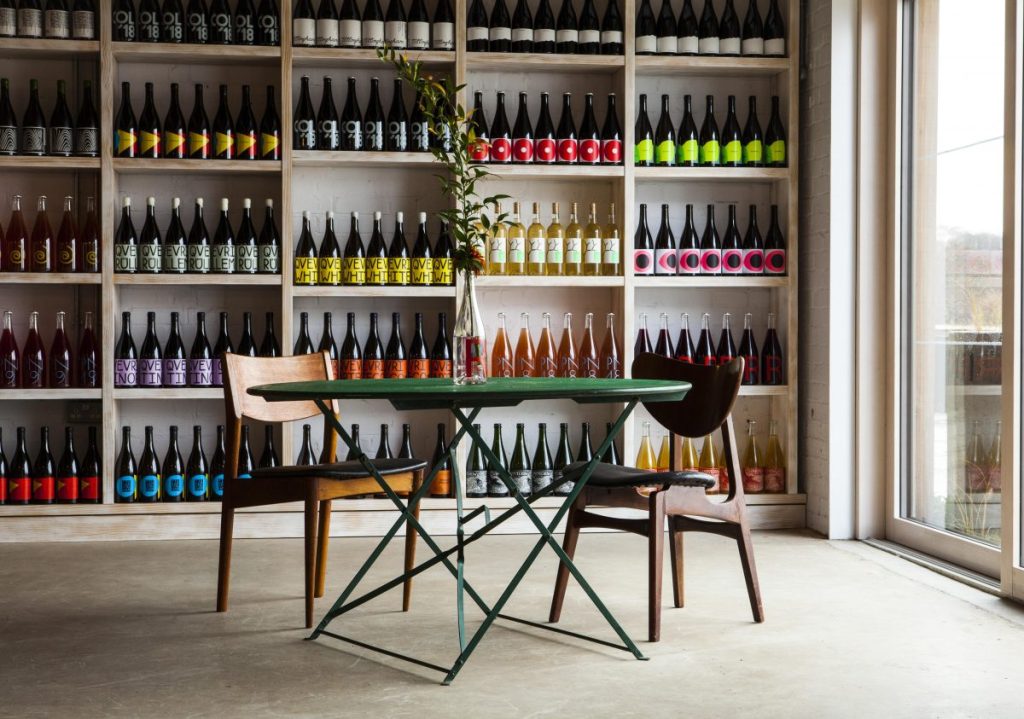 “My wines are made for sipping in the park, on the beach or on top of a bus – that’s the sense of place I want them to have. When you drink Heavy Pétting it comes across as the love child of a foaming alcoholic Ribena and an X-rated red.” El Otro Lado Torrontes 2017, PolOpuesto
Argentina
The Tupungato (Mendoza) region of Argentina is named after the eponymous volcano, in whose afternoon shadow PolOpuesto’s vines find respite from the day’s sun (see below). They’re grown at high altitude (above 1200m) and trained in the traditional pergola system, which allows a canopy to form, protecting the grapes from the merciless Argentinian glare.

For the wine aficionado, El Otro Lado’s grapes are a prize, one of the few types not European in origin, but instead a blend of heritage varieties that occurred centuries ago in the country and which could almost be considered native. Certainly, the present-day variety exists nowhere else in the world.
“The orange colour of the wine reflects the intensity and brightness of the desert sun,” says owner and founder, Pol Andsnes. “Its mineral acidity evokes the granite stones that embrace the icy night air drifting down from mountain glaciers.” 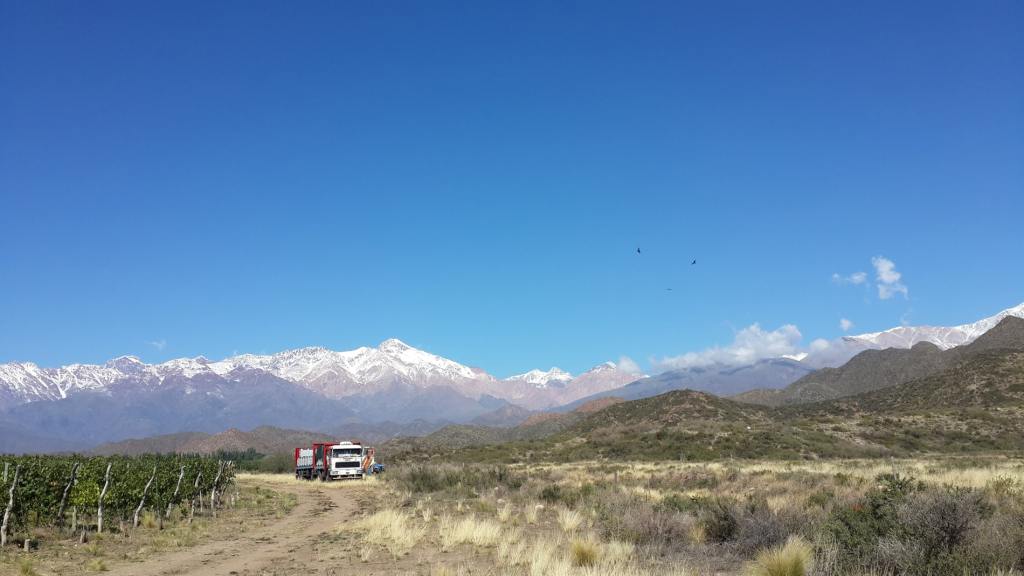 Nù Litr Bianco Puglia 2019, Calcarius
Italy
Calcarius has frequently been touted as an ‘avant-garde’ natural wine project; progressive in character and distinctive on the palate. Its founder, Valentina Passalacqua (see below), abandoned a career in London to establish a vineyard in her Italian childhood hometown, which is some indication of the layers of story and personal devotion present in each bottle.

The soil in which her vines grow is idiosyncratically calcareous (hence the name), lending itself to wines with robust minerality. The Bianco, in a neat litre bottle, is Puglia writ large – sharp with lemon, ripe with orange and apricot, and the colour of a summer day’s first light.

“I’ve discovered a new awareness for nature and my winery’s mission,” says Passalacqua, reflecting on her own recent time in lockdown. “It’s about peaceful living, which is why those words will be added to our upcoming bottles as a fresh creed, along with new, inspiration-led illustrations. Natural wine, for me, is just a first step towards a deeper understanding of, and connection to, nature.” 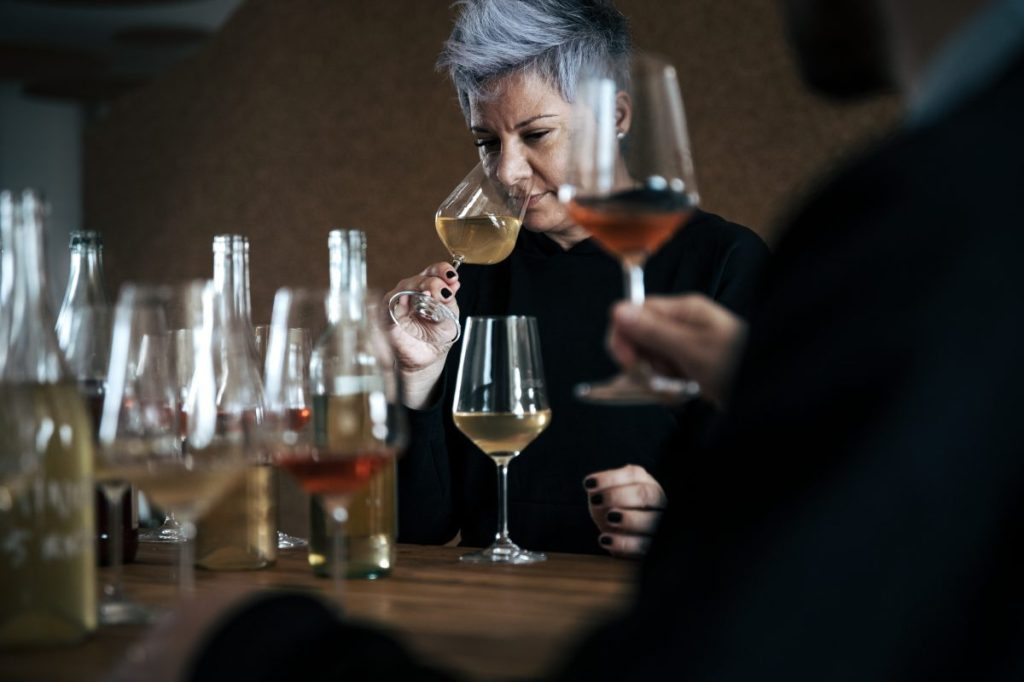 Maurer Kadarka
Serbia
Like Slovakia, its alliterative sibling Serbia is still not widely thought of as a bastion of natural wine. Even Hungary, sandwiched in between both nations, arguably has more mainstream wallop – and when was the last time you saw a Hungarian vintage in your local neighbourhood off licence? But despite a winemaking industry that sometimes flies near-stealth, there are some impressive tipples to be found in this Balkan state.

Oskar Maurer, a fourth-generation winemaker, is one of the most prominent custodians of Serbia’s growing natural wine industry, his own sweeping vineyards being found on the side of Fruska Gora Mountain, in the country’s far north. His kadarka vines were, remarkably, planted in 1880, so could be the oldest living of the variety anywhere on the planet, making the Maurer Kadarka – a floral, spicy red – quite special.

“Kadarka is the past and the future of the Szerémi wine region,” Maurer says, “and the bridge between the two is diligence and persistence.” 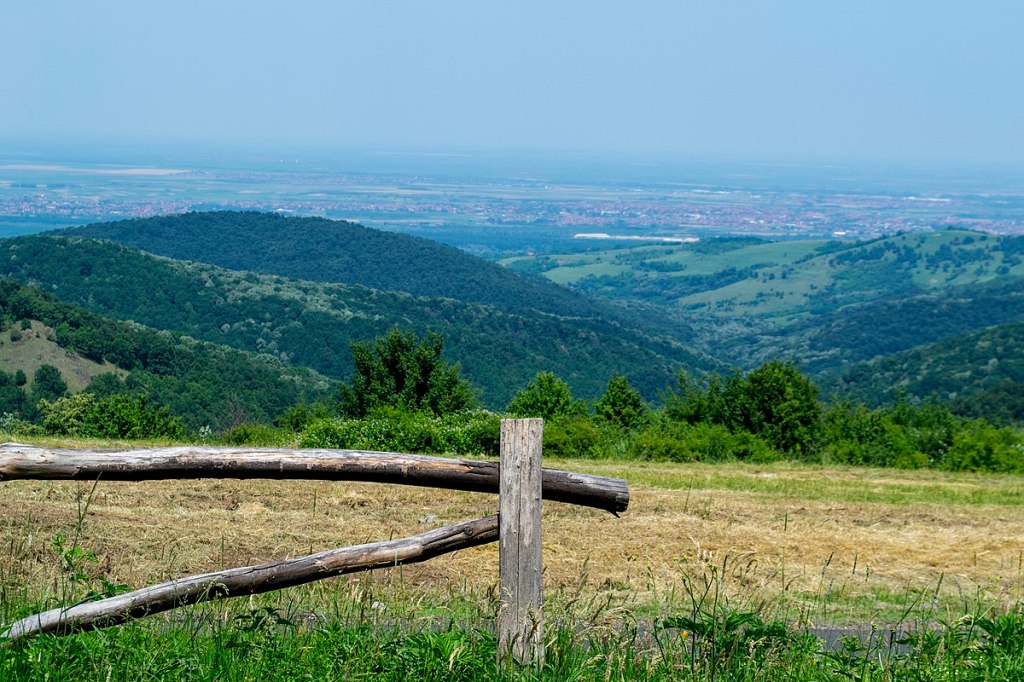 Liquid Skin 2019, Mother Rock
South Africa
Johan Meyer has been called the “most important rising star” of the South African natural wine scene and, looking at his roll call of classics-to-be, it’s a title that’s difficult to disagree with. Mother Rock, which Meyer founded in collaboration with Indigo Wine’s Ben Henshaw, is perhaps the label he’s most commonly associated. Its characterful varieties can be attributed to its origin, in South Africa’s Swartland region, about 40 miles north of Cape Town.

The starting point for those uninitiated in Mother Rock is surely Liquid Skin, a complex Chenin Blanc. Practically luminescent, its golden hue hints at the exoticism of its flavour profile, which packs tropical fruit as well as honey and citrus; its buoyancy, good humour and lightness of spirit is the epitome of South African wine country. 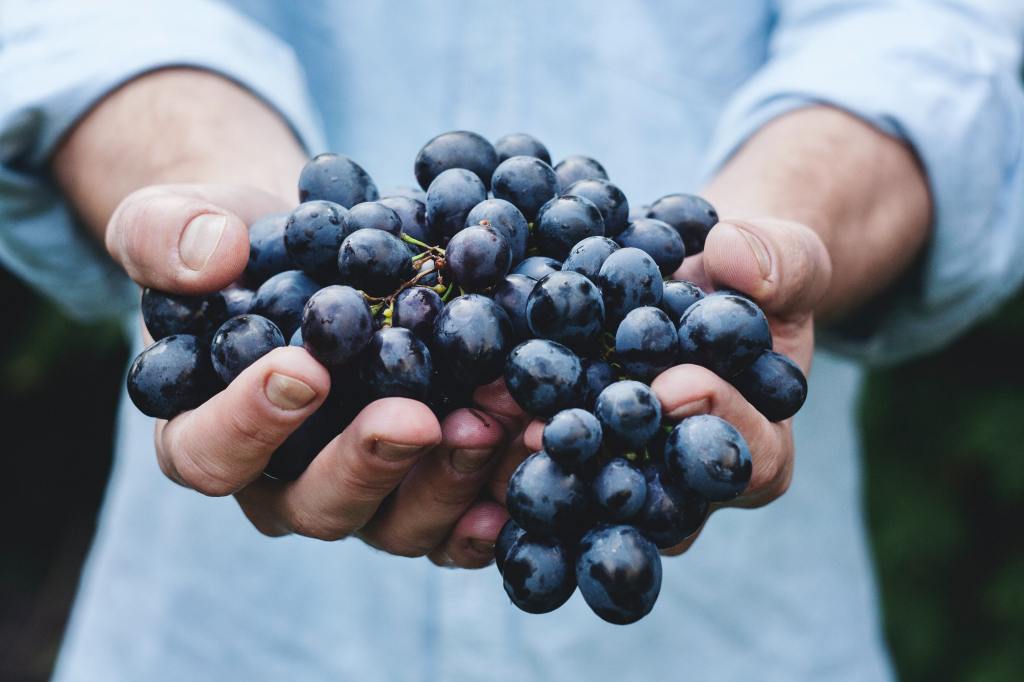