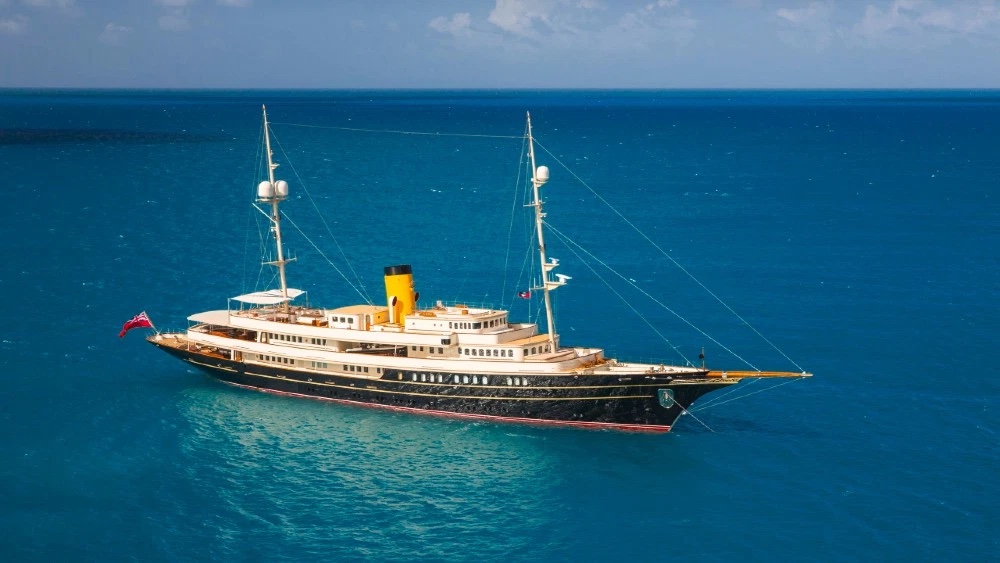 Superyacht fans around the world will instantly recognise Nero, the one-of-a-kind 295-footer that defines the term “modern classic.” First launched from Corsair Yachts in 2007, Nero was commissioned as a replica of the famed 300-foot Corsair IV owned by J.P. Morgan, which, when launched in 1930, was the world’s largest yacht.

British entrepreneur Neil Taylor loved the look of Corsair IV, but didn’t want the expense of restoring a vintage yacht—which would’ve been impossible with Corsair, since it had transitioned into a high-end cruise ship in Asia and eventually sank off the coast of Mexico. Instead, Taylor set about building a beautiful replica with a modern hull and interior.

Taylor actually established the Yantai Raffles Shipyard in China and hired 400 workers to build the yacht, which took nearly four years to complete. Two years after her delivery, she took Best Motor Yacht over 246 feet in the ShowBoats International Design Awards. The 1930s lookalike has since undergone two major refits, the latest just completed at San Giorgio del Porto in Genoa, Italy, to become an even more modern version of the original classic.

“Nero’s original build was fairly complex, so this refit was a great opportunity to technically upgrade her to the latest regulations,” Capt. Marcel Busse told Robb Report. “I’ve overseen numerous large refits on other boats, but this one takes the cake on many levels.”

The icing on that cake is the sundeck gym filled with Technogym equipment, including a Kinesis, treadmill, cross trainer and cardio bike. The area also has loose weights, yoga and Pilates equipment and, naturally, a certified physical trainer is part of the crew. A large Jacuzzi just steps away on the sundeck makes a perfect post-workout de-stressor.

“It used to be a ‘snug’ salon, but was underused,” says Busse. “Now it’s a fully-fledged gym with mirror-fronted storage lockers, fridge and TV. We’ve got a lot of space on the sun deck, which is monstrous compared to other boats of her size.” An 18.7-foot-long resistance pool is also located on the foredeck. The original gym has become a beauty salon and massage area.

The interior was also updated with lighter-coloured woods and decor for a Hampton’s beach-cottage look.

Nero’s owners have been careful to preserve its inimitable historical look, including the long bowsprit and yellow funnel in the centre. The sleek exterior lines that herald the golden age of yachting haven’t been touched, though her striking black hull and superstructure have received a fresh coat of paint. One key area that has been rehabbed: The air-conditioning system, which could spell the difference between heaven and misery on such a large yacht. “It’s key for a black-hulled boat like Nero,” says Busse.

Nero underwent a nine-month refit five years ago that included an updated interior by designer Laura Pomponi. “The owners spent a lot of time and money in 2016 upgrading the interior from dark wood to lime-washed wood with light-coloured carpets,” says Busse. “We’ve maintained the lime wash and given the interior a Hamptons beach-house vibe.”

Pomponi was brought back for Nero’s most recent refit, giving the interior turquoise hues with blue and red accents. Handmade carpets run throughout, including the owner’s duplex suite with separate lounge, study and his-and-hers bathrooms. Most soft furnishings, fabrics and sofas have been replaced. In the sky lounge bar, a new maple-and-oak hardwood floor delivers a wow factor in what looks like a classic yacht.

For onboard entertainment, a newly installed and upgraded Icon Connect AV/IT system delivers the latest technology. A collection of water toys, including an inflatable slide, keep everyone happy in the water.

As part of the refit, Nero’s original custom 31-ft. limousine tender also got a makeover, with new paint and varnish, upholstery and interior lights to update her classic beauty.

Despite the classic look, Busse says the yacht has a modern hull that cruises well at 14 knots, while consuming the same amount of fuel most yachts her size would use at 12 knots. “She has two sets of stabilisers, giving her four in total, so she’s quite stable,” he says.

Nero and her tender are instantly recognisable anywhere in the world.

Nero is available for charter in the Med through Burgess Yachts, with weekly charters starting at about £425,000.