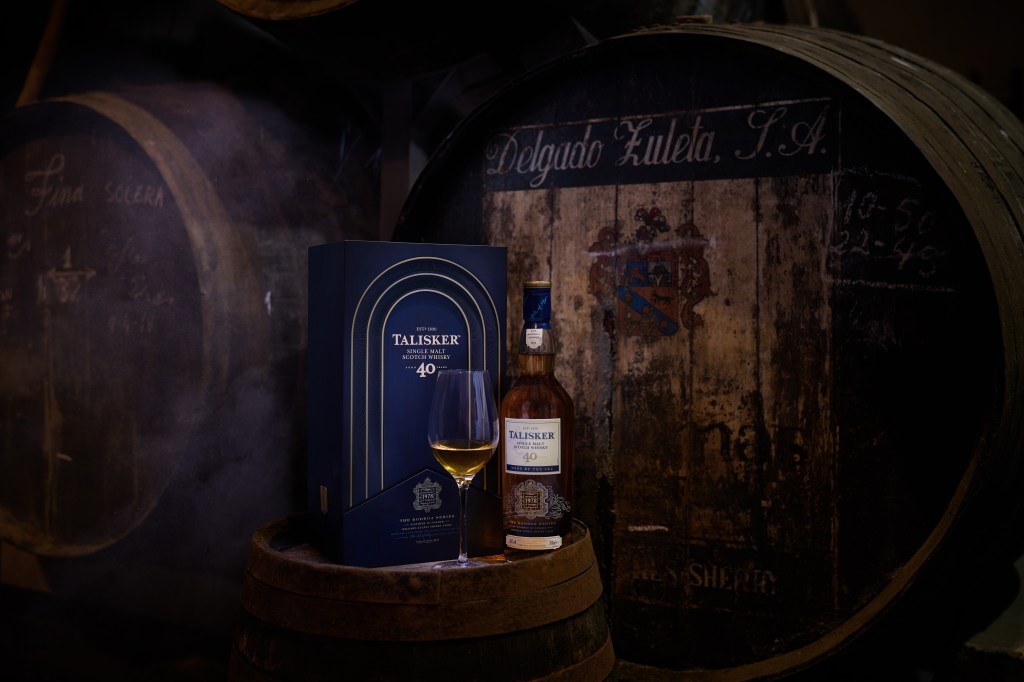 We’re standing in the Amontillado Room in the dusky heart of the bodega of the 274-year-old Delgado Zuleta, where sherry casks are stacked high, the nutty aroma of the resting fortified wine filling the warm air. We strain our eyes to the top of the mound, on which barrels caked in dust rest. It is from this stack that Talisker chose the five barrels used to transport the bodega’s most prized Quo Vadis Amontillado back to its distillery in Skye.

From here, the barrels were filled with some of the finest liquid from the distillery – 40-year-old whisky that had been ageing in American Oak, watched over carefully by the master distillers. They were then left to mature for three to four months, and only when the drop was deemed perfect was it bottled.

This is a very special dram. Available since June 15th, only 2000 bottles (£2750 each, Whiskyexchange.com), all packaged in a handsome wooden box referencing the sundial of the town of Sanlucar, where Delgado is situated. It is the oldest whisky Talisker has ever released on a global scale, and it is spectacular: the first sip transports you straight back to that almond-scented bodega.

Whilst sherry ageing is not a new thing, finishing whiskies in rare and premium barrels is becoming a very high-end trend in the luxury spirits sector. There has long been an association between sherry and the Scotch industry. The casks were carried from the sherry region in Spain to Britain, to quench the almost insatiable thirst for it here at the time. Empty barrels were then often bought up by distillers for ageing whisky in. Talisker scoured its old records and saw that there had been historic links between Delgado – the oldest bodega in Jerez – and the distillery, harking back to the early 19th century. “We wanted to re-create and re-imagine what those flavours could be like,” says Diageo global malts ambassador Donald Colville.

This is the first expression in Talisker’s new Bodega Series, which will see a new expression aged each year in barrels from highly distinguished sherry producers. “When I first encountered it I couldn’t stop smelling it – a whisky so good I forgot to taste it,” exclaims Colville as we put a glass of the Talisker Bodega Series: Talsiker 40-Year-Old to our noses. Taste it we did, though, and it is one cracker of a whisky. Silky, smooth and elegant with an exceptionally sweet nose and a dry finish.