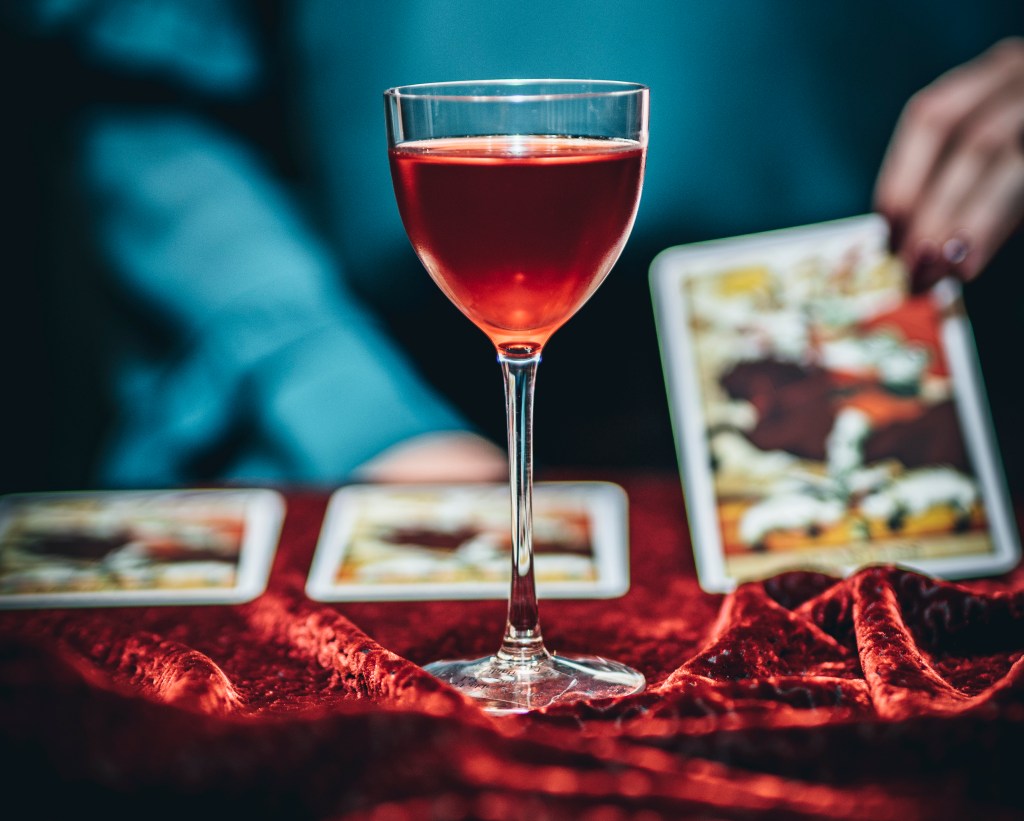 The Bloomsbury Club Bar, Bloomsbury
Step into the plush surrounds – think gentlemen’s club meets plush Soho grotto  – and you can easily imagine London’s prominent early 20th Century writers, intellectuals, philosophers and artists, were they alive today, dissecting pacifist aesthetics for an hour here before sneaking off for some gleefully indiscriminate bed-hopping. The bar’s new immersive boozing concept – inspired by a deck of Tarot cards (see main pic) designed by bohemian occultist Pamela ‘Pixie’ Colman Smith in 1910 – sees a set of 14 cocktails offered in response to 14 states of mind (a touch melancholic? A sip of Persian Mist is prescribed). It’s as silly and fun as it sets out to be! Make sure you try the Mad Monkey – Avion Plata Tequila, peach citric and egg white with a chilli tincture – before challenging the cold night air to do its worst to your face-flush.
16-22 Great Russell Street, WC1B 3NN (thebloomsburyclub.com) Mele e Pere, Soho
The basement bar of this Brewer Street trattoria has a selection of Vermouths – the largest in London – including its own homemade varieties made with 20 different botanicals. Hence, classics from the cocktail’s 19th– and early 20th-century heyday such as the Martini and the Negroni are a staple. The latter here, The Mele Negroni, blends Vermouth, an aromatised fortified wine from Italy, with home-made hibiscus syrup and lemon. Try, too, the aptly named Slippery Slope: Monkey Shoulder whisky, with ‘Discarded’ Vermouth (which basically means it’s been sweetened with cascara) and Londinio Amaro.
46 Brewer St, Soho, W1F 9TF (meleepere.co.uk) Scout, Hackney
The zero-waste philosophy at which East London occupies the vanguard has hit its drinking scene, with this sustainability-focussed establishment conceived by Matt Whiley (formerly of Peg + Patriot and Purl) and avant-garde mixologist Rich Woods, who launched bars at Sushisamba and Duck & Waffle. These guys use the harvests reaped by in-house forager ‘John the Poacher’ as ingredients, and even ferment leftover cocktail ingredients and make their ‘wasted wines’ out of them. We’re recommending the S’More Ramos – whisky, caramelised cream, waffle cone cacao, cherry bark and sparkling wine.
224 Graham Rd, London E8 1BP (scout.bar) 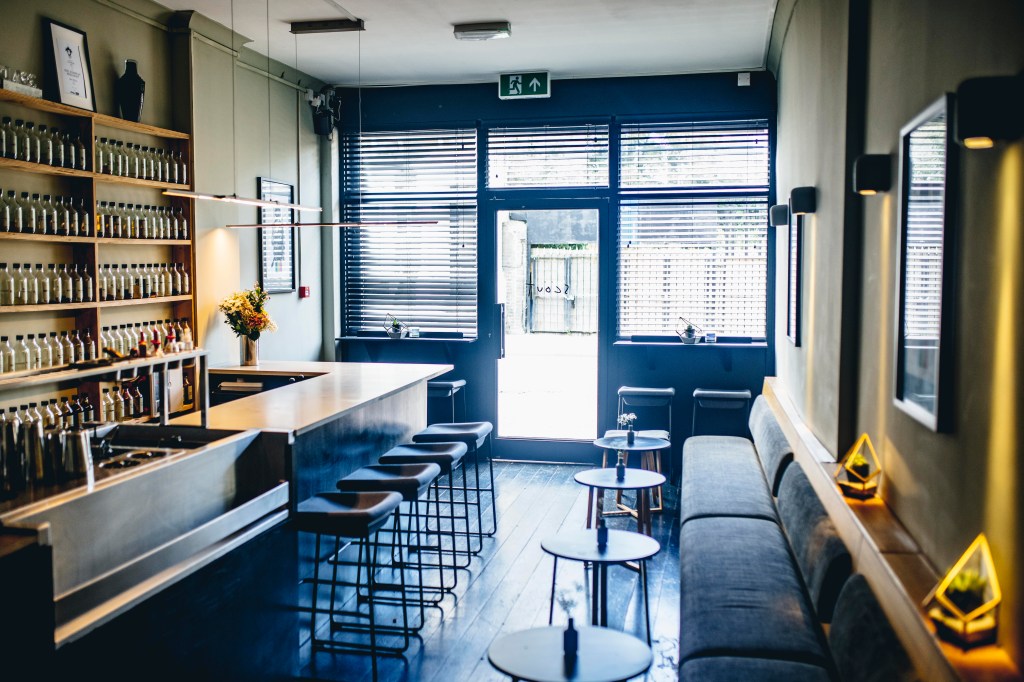 The Library Bar at The Lanesborough, Hyde Park Corner
The Library is cosy in a statelier-than-thou kind of way, and is also a booze scholar’s haven: bar manager Mickael Perron has curated a new single malt whisky collection, ranging from classic Speyside single malts to collectible and rare bottles. And they’re not snobby about shaking, straining or stirring these rarefied drops into pick-me-ups for the weary after-worker: The Library Bar’s signature cocktail, the Gaspari Manhattan, is made with The Balvenie Caribbean Cask 14-year-old – a whisky that has been matured for 14 years in American oak, before being finished for six months in casks previously holding a unique blend of Caribbean rums.
Hyde Park Corner, SW1X 7TA (oetkercollection.com) 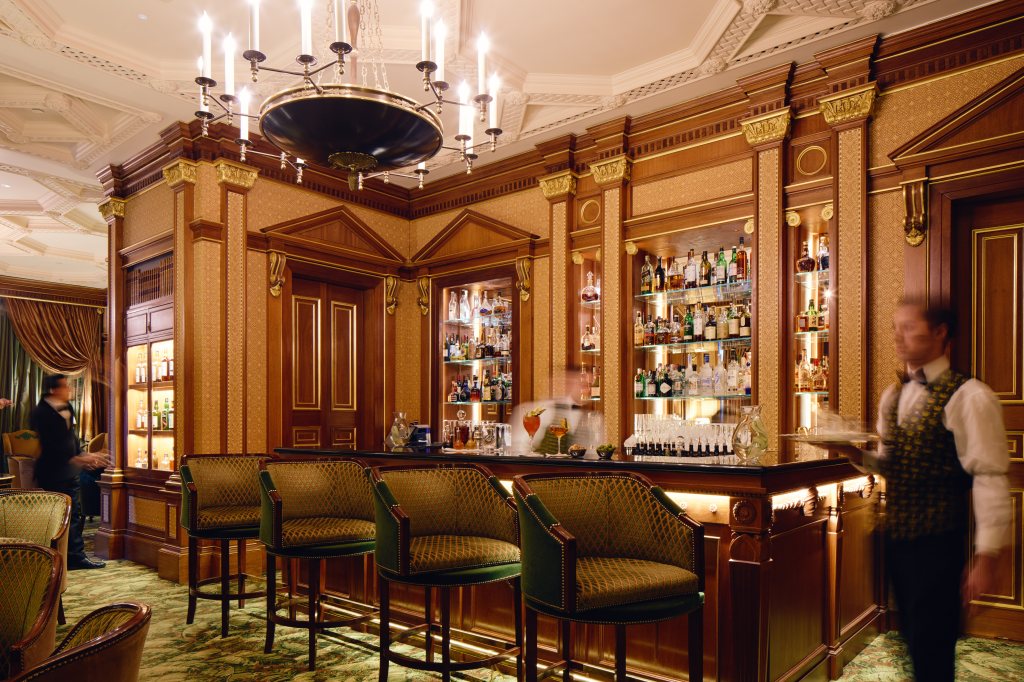