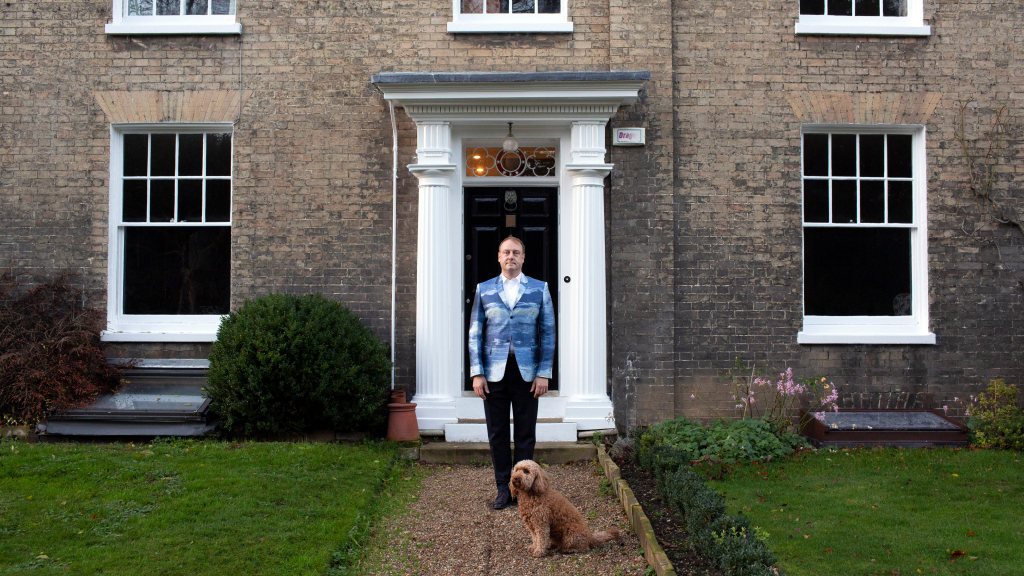 Just over a decade ago, standing in the dimly lit cellar of a posh London townhouse, Edgar Harden made a snap decision that would change his life.

A seasoned wine dealer, Harden had been summoned to partially liquidate the contents of a client’s cellar, including some ultrarare 1982 Château Mouton Rothschild. Off-handedly, the client mentioned that there might be some 1960s gin—think Mad Men–era—lying around. “Get rid of it,” the collector sniffed. “Take it to the skip.” But Harden didn’t toss the crate of Gordon’s he uncovered; his curiosity piqued, he took it home and made a martini. Harden was floored by the flavour: softer than a bottle from the shelf, with a strong forward note of citrus.

Since mixing that first vintage martini in his kitchen, Harden’s home has been overrun with dusty vintage bottles, mostly stored in cardboard crates in his basement; he guesstimates he currently keeps 3000 or so on hand. That’s because his one retro cocktail transformed Harden into a martini-swilling answer to Indiana Jones, tracking down alcohol rather than artifacts. He now supplies elite bartenders and collectors with everything from mid-century Drambuie to obscure artichoke-flavored amaro Carciofi or atomic-era Jim Beam. 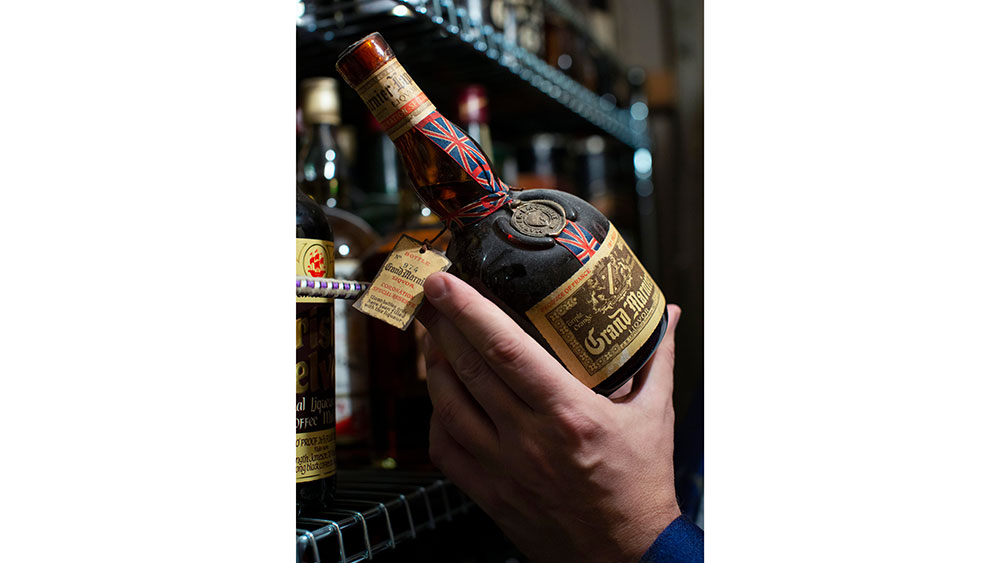 A 30-year-old Grand Marnier from the coronation of Elizabeth II.

Now 48, Harden was born in Vancouver and studied art history before stints on staff at the Getty museum in Los Angeles and the Louvre. He then moved into the commercial sector, using his expertise in French decorative arts as a specialist at Christie’s. Because his office there was close to the wine department, he often found himself dragooned into joining tasting sessions and slowly developed additional know-how that broadened his professional connoisseurship. When Harden moved to London in 2008 after marrying a British academic, he had no idea he was walking straight into a gold mine of vintage booze—and a new career that would draw on both his refined taste and his enviable ability to distinguish between a rare discovery and flea-market standard fare.

Wealthy Brits have a long tradition of cellaring wine, and with the Downton Abbey-esque influx of nouveaux riche Americans in the early 20th century, cocktailing became de rigueur and spirits were added to the stock downstairs. But by the late 1960s, diminishing fortunes had led to the demise of private cellar masters and dining out had supplanted lavish dinner parties, leaving ample stocks of gin, rum, rye and cordials to languish. It’s those treasure troves that Harden now hunts down, with a focus on bottles more than 30 years of age. And the hunting is good: A single estate can yield thousands of musty but untouched lots. He stores his most important finds at home but rents a barn outside the city for his overflow. At any one time, he keeps around 6000 bottles in his inventory.

The lure of Harden’s hoard transcends novelty. As classic cocktails came roaring back at the turn of the millennium via the craft-cocktail movement, kickstarted by the likes of the late Sasha Petraske at New York’s Milk & Honey bar, they created a thirst for original ingredients—and a market for forgotten, old bottles. Harden was one of the first to leverage this new craving, but he isn’t alone. Other firms offering similar services for sourcing old bottles include the Netherlands-based Old Liquor Company and Soutirage in Yountville, California, which has broadened its initial wine services to spirits. Harden, though, is inarguably the most respected and connected vintage spirit broker in the world. 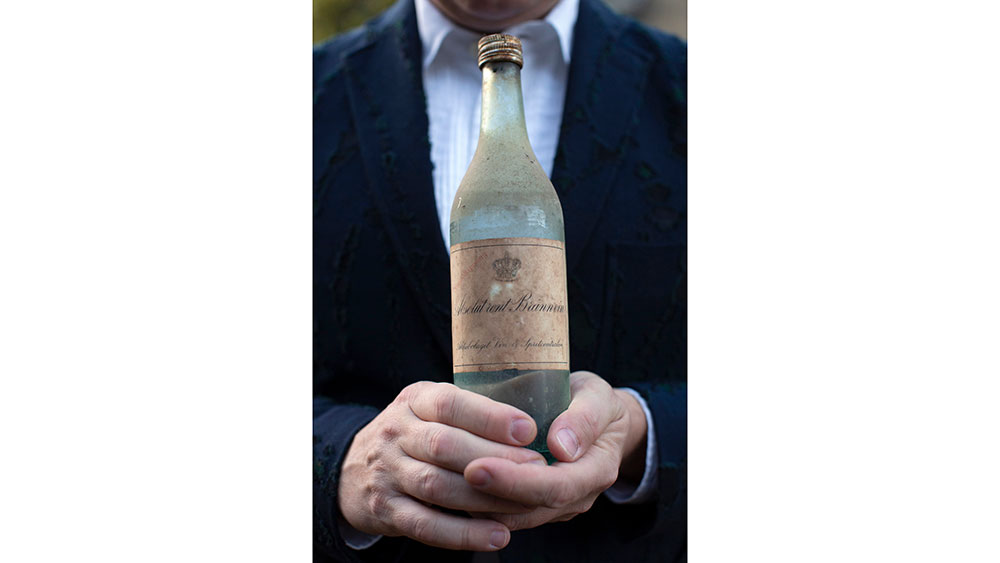 Absolut Vodka with a label printed using a hand-engraved plate from long before the distiller’s 1980s rebranding.

He is also an insightful guide to this unexpected market. Don’t assume, he warns, that a martini mixed with vintage spirits will taste the way it did when Kennedy was in the White House. Spirits, like wine, evolves in the bottle. The botanicals in gin, for instance, mature at different rates, with the flavour of juniper falling away and the citrus becoming more prominent, as Harden discovered with his epiphany martini. Rum, often bottled at 120 proof, becomes lighter and subtler with age. “Drink the old ones,” he explains, “and you can taste the sunshine.”

Reformulated recipes are another reason cocktail purists flock to Harden’s aptly named Old Spirits Company. A 40-year-old bottle of Southern Comfort, Harden says, is a far cry from the cloying treacle now stocked by college bars. “The older stuff has Irish whiskey in it,” Harden says, passing me a bottle from the 1970s. “And it isn’t artificially coloured.” Harden says manufacturer Brown-Forman tweaked its formulation in the ensuing years to appeal to female drinkers, resulting in what he dismisses as “that sickly red, hen-night shooter.” (New Orleans–based Sazerac Company bought the brand in 2016 and reformulated it yet again; a spokesperson says it has readjusted the recipe to include whiskey once more, “to ensure it was kept as close to the original recipe as possible.”) 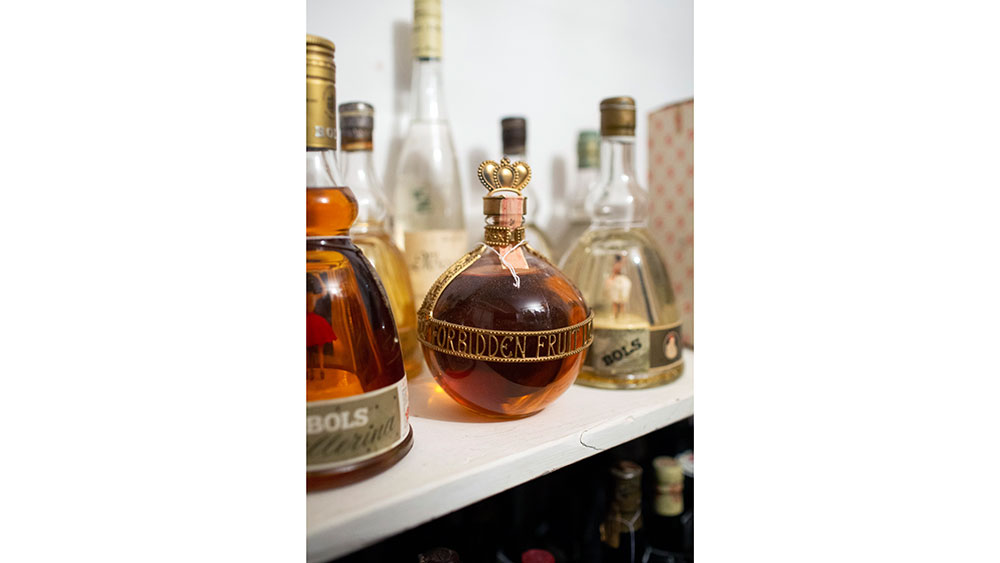 Forbidden Fruit Liqueur in the bottle style that would later be used for Chambord.

Other brands deny they’ve tampered with the formulas or insist that any small adjustments have not altered the taste. Take Drambuie. Harden says that a bottle of the Scottish liqueur from the 1950s will have a more pronounced peaty or smoky whisky flavour due to the higher-quality malts used in it. In newer Drambuie, Harden suspects that cheaper whiskies might have been used in lieu of the original malts. To an amateur palate, the older version certainly tastes smoother, but is that a result of in-bottle aging or ingredient-tampering? Current Drambuie master blender Brian Kinsman insists that the recipe used now is the same one first documented in 1914, with a base of blended Scotch whisky. He does acknowledge that the sugar supplier changed at one point, because the liqueur was prone to developing sugar crystals once opened. The new sugar supply, Kinsman says, “is sweeter, but there was a lot of work done to ensure the final product retained the original level of sweetness.”

Harden’s clients are primarily fine cocktail bars around the world, which increasingly offer premium-priced vintage versions of Manhattans, martinis and such, using old spirits, often listed on stand-alone request-only menus. Stateside, San Francisco’s Smugglers Cove is a regular buyer of old rums, which owner Martin Cate adds to his 400-strong stock in an area of the bar he calls The Vault. The Aviary in New York and Seattle’s Canon are among his other customers. Harden works on a project basis with private clients, too—the most popular request is a 40-year-old bottle to gift for 40th birthdays. He also helps individuals keen to build their own throwback cellars, like a recent buyer who tasked him with a top-secret mission. For her 25th wedding anniversary, she wanted him to curate a dozen-strong cabinet for her husband, with bottles of gin, whisky and the like dating back to the era of their marriage.