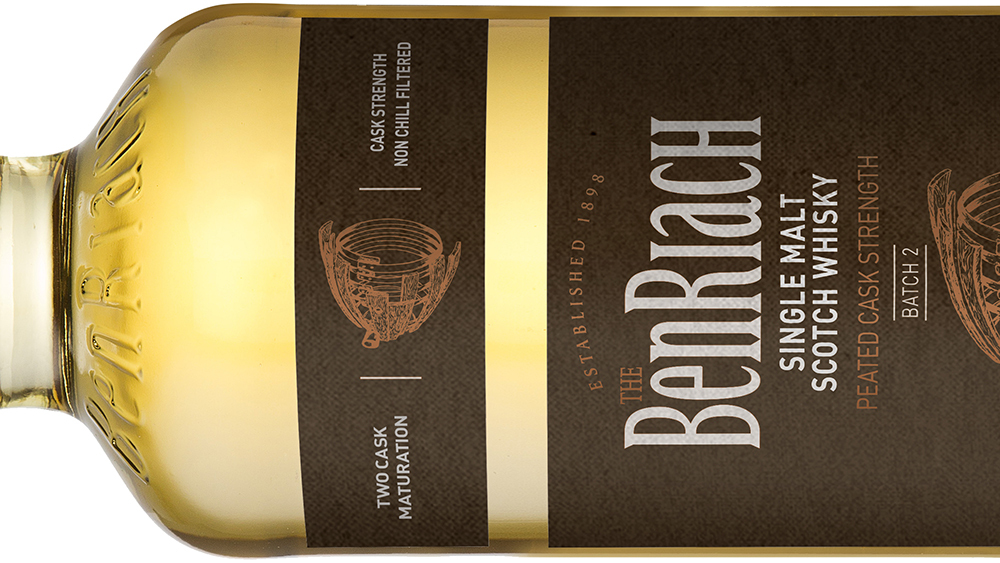 The BenRiach is a small Scotch distillery in the landscape of Speyside giants—its neighbours include powerhouses like Glenfiddich and the Macallan, so it’s not all that surprising if you haven’t heard much about BenRiach. But it has a few distinguishing factors we appreciate: namely, master blender Rachel Barrie’s genius and that it is one of two (the Balvenie is the other) whisky houses that still malts barley on its own malting floor. Perhaps, though, it’s that low profile that drove the decision to release one of the boldest cask-strength whiskies we’ve seen across a flurry of high-proof releases.

While 2018 saw cask-strength single malts hit a high, distillers are still excited about these beefy releases, and so, occasionally, are we. Cask strength means the spirit went into the bottle with a higher alcohol content than usual—say, 50 to 55 percent alcohol by volume (or 100 to 110 proof) as opposed to the industry standard of 40 percent. For a number of reasons, not the least of which is the public’s illimitable lust for shiny new things, superproof bottlings have become quite fashionable over the past five years or so. Truth is, though, a lot of that high-octane liquor can be tough for all but the most cast-iron-stomached among us to swallow. There’s a reason 80 proof has been the norm for so long, and that reason is that most of us prefer a shyer spirit that doesn’t numb the tongue. But, as stated, we sometimes like the stronger stuff, too.

Peated Cask Strength: Batch 2 (£84), the latest release from the BenRiach, is a single-malt Scotch whisky that will test the intestinal fortitude of the heartiest hooch drinkers. Weighing in at a whopping 121.2 proof, this husky dram is struck through with heavy smoke and wood flavor and dense vegetal notes. Think of the biggest, brightest bonfire you’ve ever seen, and then try to imagine all that white-hot intensity being bottled for consumption. No doubt there are people out there who enjoy drinking whisky as powerful as this neat. These same folks are likely to remind bystanders of Al Swearengen from Deadwood.

Fortunately, you don’t have to be a hard-bitten straight-swiller like Al to enjoy Peated Cask Strength: Batch 2; you just have to have a little water handy. With a bit of dilution, the whisky’s oomph abates, revealing all sorts of pleasantries on the palate including butterscotch, crème brûlée, apple, and star anise. These more delicate attributes work in harmony with the peat smoke to bring the whisky into balance. Relieved of some of its cask strength, the BenRiach’s Peated: Batch 2 becomes downright inviting. It’s a classic example of less being more.