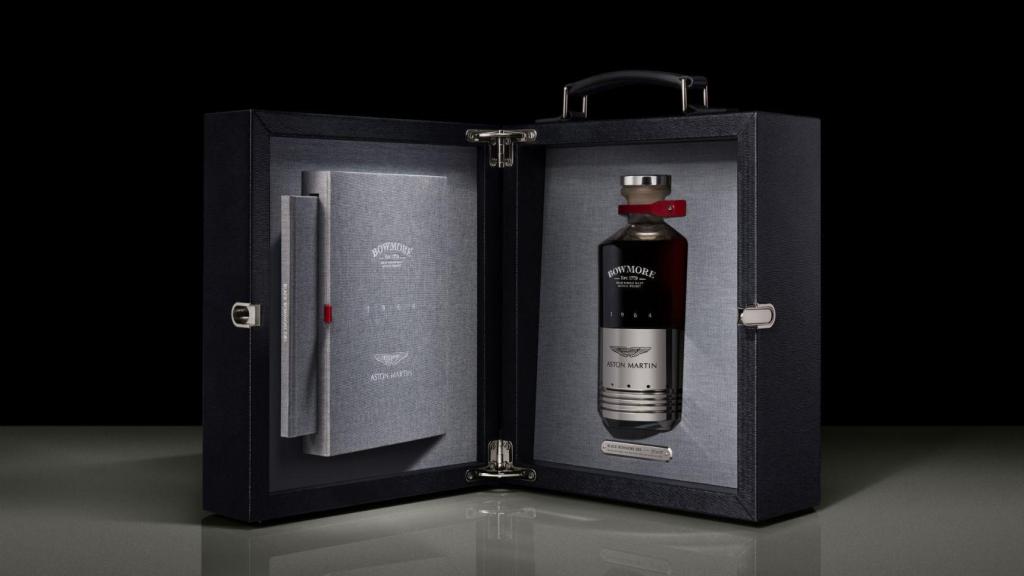 When two industry titans join forces in pursuit of a common goal, the results can be delicious. At least that’s true for the new collaboration between Bowmore and Aston Martin, which have teamed up to produce a new whisky inspired by one of the automaker’s most iconic cars.

For the first time, Scotland’s revered distiller and England’s premier automaker have partnered on a limited-edition single-malt inspired by James Bond’s favorite ride, the DB5. The Black Bowmore DB5 1964 is so named for the year it was distilled and this decanting––limited to a scant run of just 25––marks only the sixth time since 1993 that the rich amber liquid has ever been bottled.

But that year and the accompanying whisky have additional significance for Bowmore, as manager David Turner explained in a statement. “As coal fires made way for steam in heating the stills, it was the first distillation from this new method that went on to create Black Bowmore.” In a moment of serendipity, that period also played a major role for Aston Martin as it launched the DB5, arguably the marque’s most iconic vehicle, only a year earlier in 1963.

The bottle is as rarefied as its contents with a handcrafted glass body featuring an Aston Martin piston. Courtesy of Bowmore

First filled in 31-year-old Williams & Humbert walnut sherry barrels, the whisky has developed a cult following over the decades becoming one of the most coveted single malts ever produced. The barrel and time have imbued the spirit with deep colour and equally complex olfactory notes and flavors. In terms of scent, those lucky enough to take a whiff will be greeted by aromas of ripe fruit and creme caramel, and a bouquet of tobacco, orange peel and black cherry. When it comes to flavours, a sip reveals layers of mango, passion fruit and acacia honey woven with a combination of coffee and tobacco smoke.​

For a tipple this superb, using any old bottle would be out of the question. Each one was handcrafted by Glasstorm in North East Scotland and incorporates a genuine Aston Martin Piston. All of it comes packed in a handsome carrying case with a book detailing the unique collaboration.

Bottles will become available sometime this Autumn and sell for around £50,000 each. See more photos below: