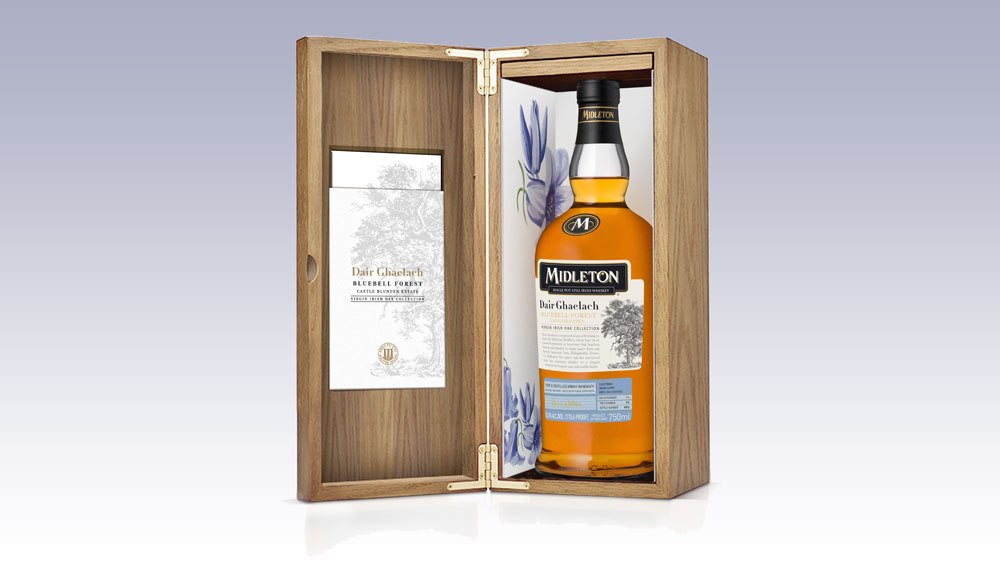 Eight years ago, the production team at Midleton Distillery in County Cork, Ireland, set out to experiment with finishing techniques featuring toasted virgin Irish oak casks. Midleton’s team—led by Kevin O’Gorman, the distillery’s head of maturation, and Billy Leighton, head blender—conjectured that the source of an oak cask, specifically the region from which the wood was forested—even the individual tree that produced the barrel’s staves—could inject unique personality into an Irish whiskey much the same way that a vineyard’s location impacts the flavor of a wine produced by its grapes.

In 2015, Midleton unveiled its first Dair Ghaelach release (Dair Ghaelachmeans “Irish oak” in Gaelic), a whiskey that was finished in casks made from oak trees that were sourced from Grinsell’s Wood, a forest in County Kilkenny. This winter, a second installment—Midleton Dair Ghaelach Bluebell Forest Edition—has reached retailers’ shelves.

To make 29 hogshead casks, six oak trees—all 130 years old—were cut from the Bluebell Forest on the Castle Blunden Estate in County Kilkenny. Each cask was made from the wood of just one of those trees. Subsequently, each bottle of this cask-strength whiskey, which costs $300, can be traced back to one of those Irish oaks—and that lineage is prominently displayed on the label.

“The naturally sweet compounds found in Irish oak work in perfect harmony with this whiskey to deliver milk chocolate and honeycomb on the nose, a beautifully round and silky-smooth mouthfeel, and a long pot-still finish,” says O’Gorman.

The liquid itself is composed of a number of classic Midleton distillates that had matured for 12 to 23 years in ex-bourbon casks—yet the 18 months of additional maturation in those Irish oak hogsheads has produced six subtly unique whiskies.

Simply put, the Midleton experiment was a rousing success. The variations imparted by each of those Irish oaks are subtle but distinct. The only downside? Tracking down the perfect bottle just became a lot harder.