They were never going to take lockdown lying down: but Britain’s burgeoning restaurant scene has gone one stage further when it comes to feeding the nation’s most discerning diners, by re-imaging their menus to incorporate meals which best recreate the fine-dining experience in customers’ own dining rooms. These, for us, are some of the offerings which translate best from professional kitchen to (often far-flung) domestic environments, with little or no prep required by the recipient. 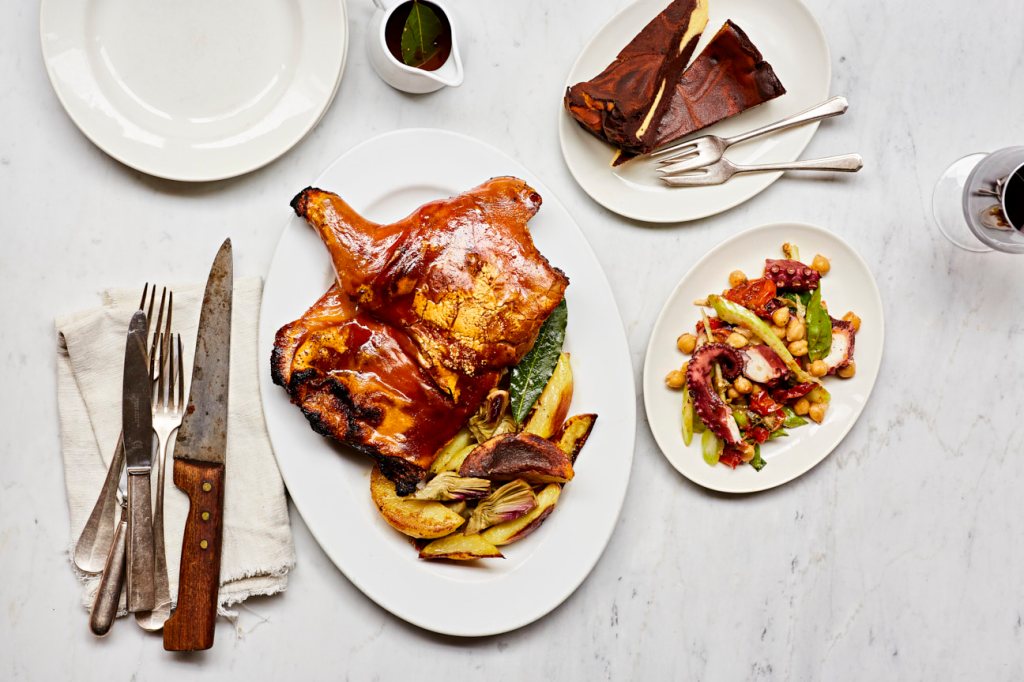 Stripped-down, unfussy but superb (and thus authentic) Italian cuisine is the stock in trade of this Soho institution which makes or prepares its gelati, breads, sausages, salame, pickles, mostarda and pasta in-house.

The regional menus change each month, and in March they’re taking at-home diners (vicariously at least) to Sardinia. One of many very enticing options on the menu features an octopus starter with roast tomato, chickpea, celery and basil salad; a main course of suckling pig with potatoes, artichokes, white wine and bay; and a chocolate and ricotta cake dessert. Available nationwide.
£92 for two, ORDER NOW 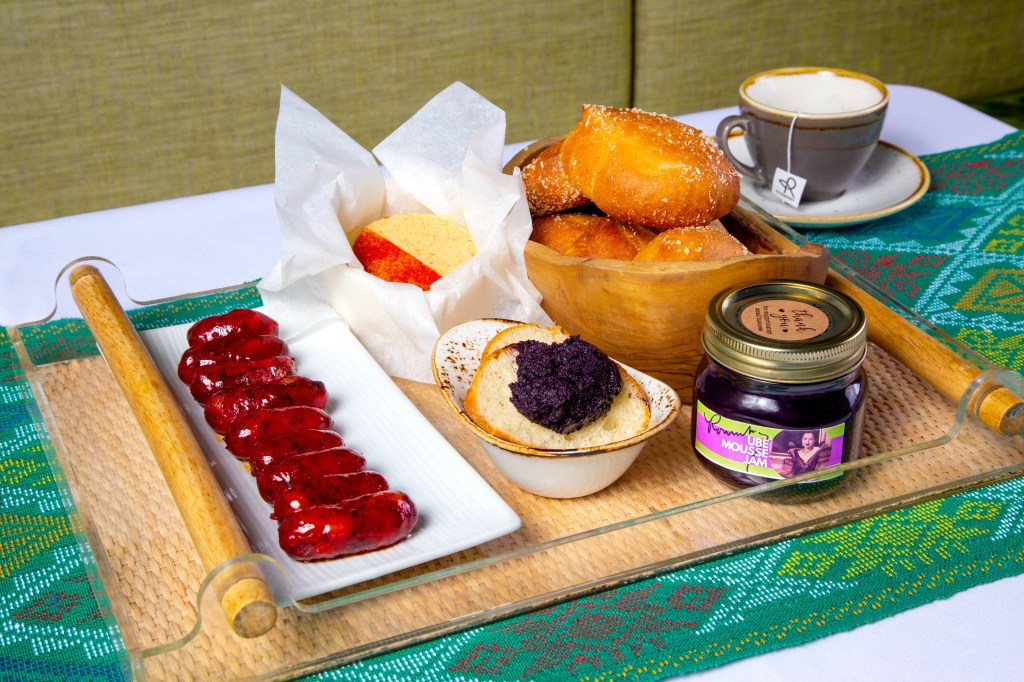 Since opening in 2016 on Kensington High Street, Romulo Café & Restaurant has seen tony West Londoners dining take to fine Filipino dining with zeal. Now, a nationwide delivery service is introducing fresh flavours of Asia with an American and European spin to a wider audience (deliveries are nationwide).

For many, it’s a great way to use lockdown to introduce yourself to new cuisine categories. Forty-eight hours’ notice required.
£25 per person, ORDER NOW 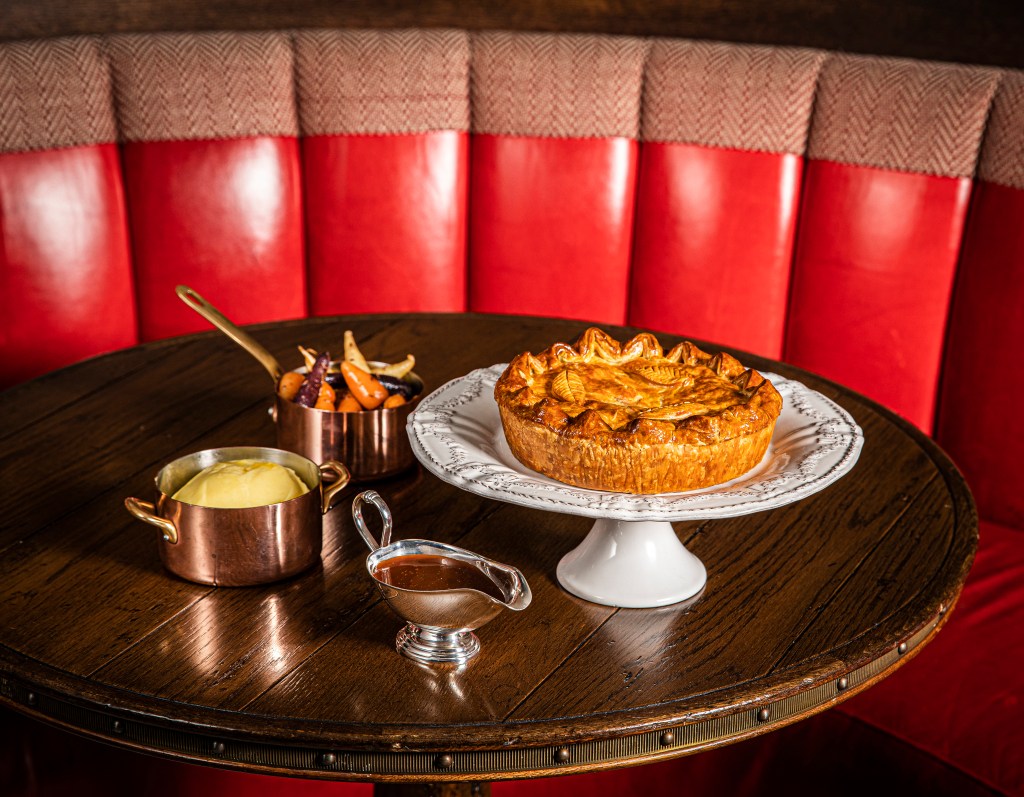 One of the scene-enhancing establishments (along with Mirror Room and Scarfe’s Bar) found within Rosewood London, the award-winning Holborn Dining Room specialises in typical British fare done extravagantly well: and their website is justified in describing Executive Chef Calum Franklin’s pies, part of the hotel’s Dine At Home initiative, as showstopping.

Curried mutton, cheesy dauphinoise or hearty chicken pie, all with sides and sauces, are available from Friday 19th March, with delivery across Central London.
From £45 per person, ORDER NOW 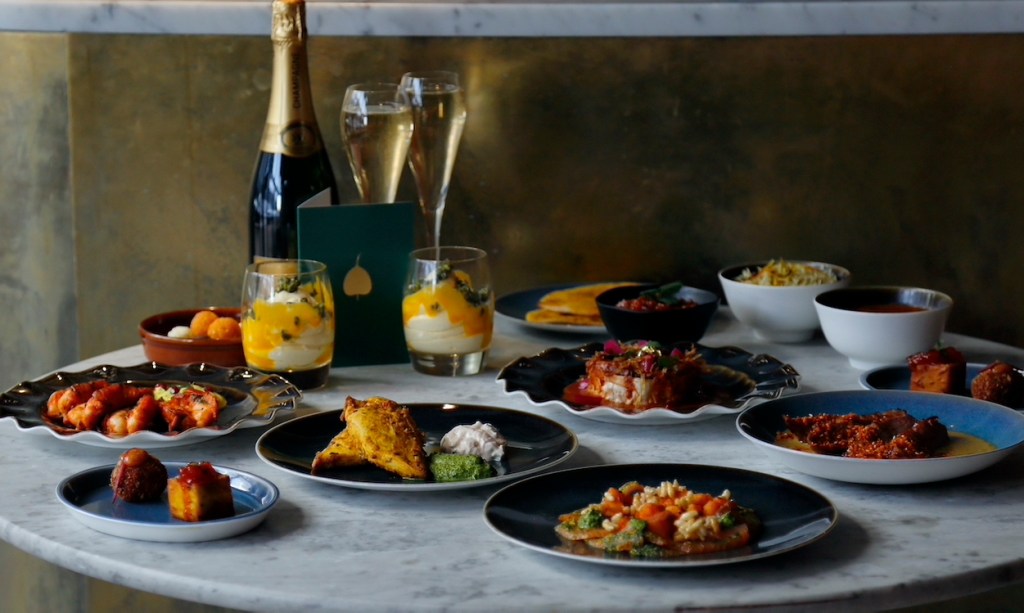 Two decades after the Indian fine dining restaurant first opened its doors in Westminster, The Cinnamon Club has launched a six-course tasting menu which runs the gamut of the establishment’s most popular signature dishes. 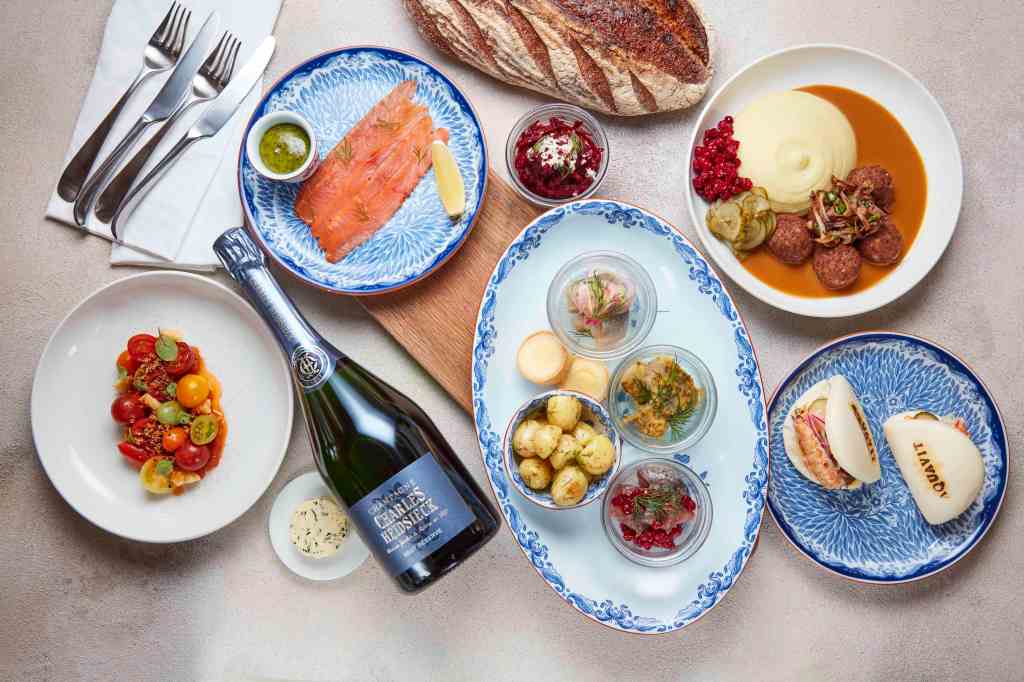 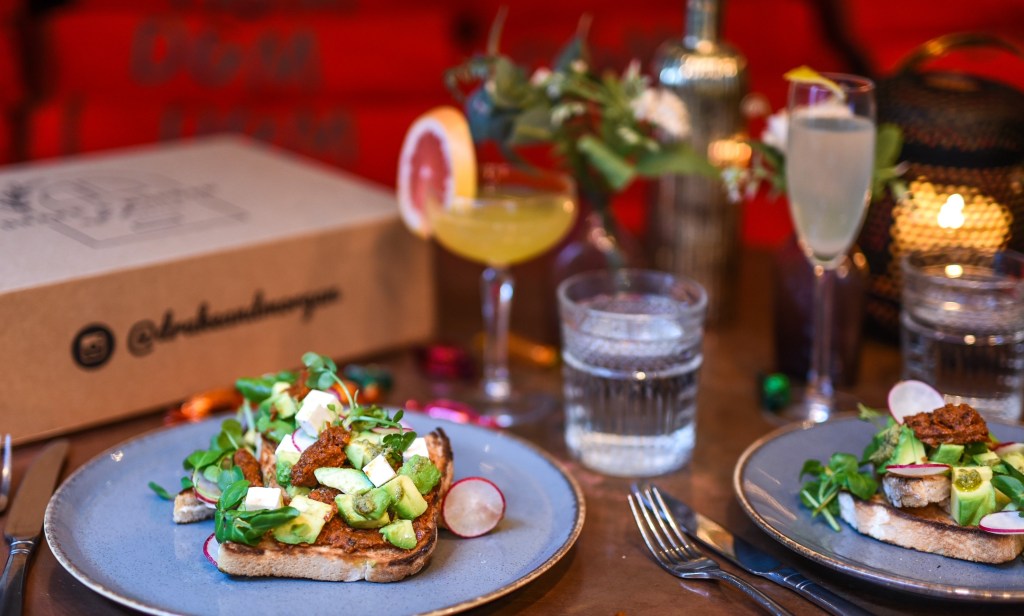 A vegan option from the upmarket London chain of cocktail bars and restaurants, made in collaboration with Symplicity Foods’ chef Neil Rankin. Expect smashed avocado on toast with Symplicity vegan n’duja, feta and pesto, served with breakfast martini and elderflower gin fizz cocktails (one per person).

Definitely one for weekend/hair-of-the-dog occasions.
£40 for two, ORDER NOW 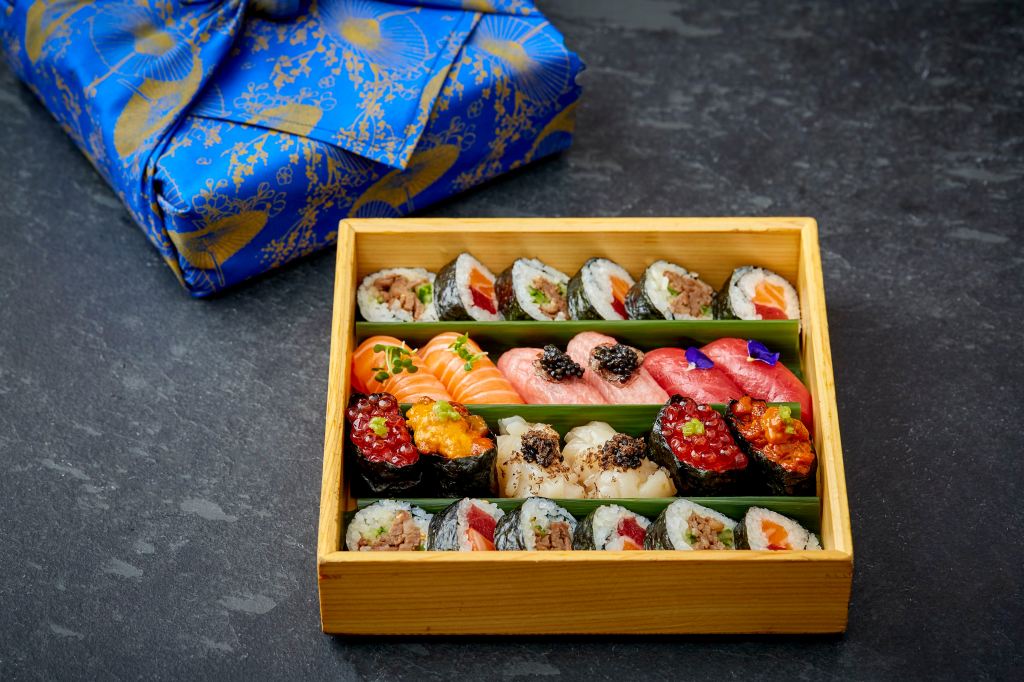 Available across London, the Islington-based Japanese establishment’s traditional ingredients come straight from that country: Sanpuki Nori grown on the shores of the Ariake Sea; premium Koshihikari rice; Wagyu cuts including A5 Japanese sirloin; authentic wasabi; soy sauces matured for up to 30 years.

The Fatty tuna with truffle and caviar in the Omakase Box (pictured) is sublime, in terms of both texture and taste. Available Thursday-Sunday from 5-9pm, with delivery available up to six miles from the restaurant.
£110 for two, ORDER NOW

The Botanical Rooms’ ‘At Home’ Packages 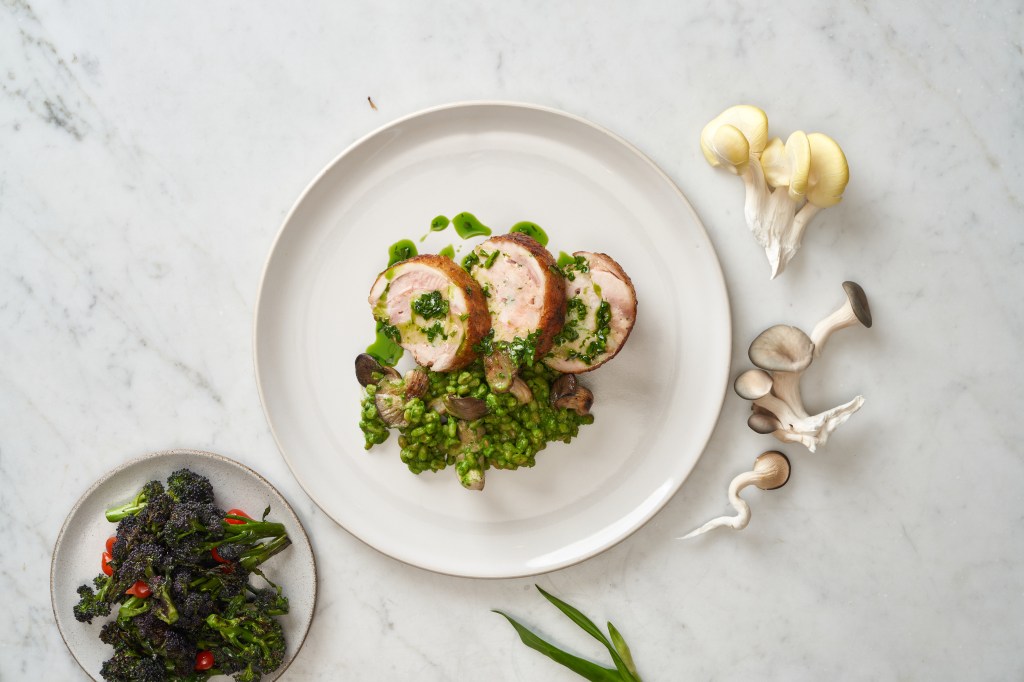 Ben Champkin, new Head Chef Botanical Rooms – one of the restaurants at what is arguably the brightest jewel in Somerset’s hospitality crown, The Newt – is behind these three-course suppers for two, designed specifically to be warmed up and tucked into at home. And, as with the restaurant’s fare, provenance and seasonal ingredients from The Newt’s Kitchen Gardens is at the heart of the culinary philosophy.

With meat, fish or vegetable mains available, the menu will change each week, but expect fare such as boat fish (with the type confirmed once the catch of the day has landed) with confit new potatoes and lemon and caper vinaigrette; chicken thigh with garlic and lardo, mushroom spelt, wild garlic and chimichurri; or fava bean miso roasted cauliflower, wild garlic spelt and crispy fava beans.

All come with a side of grilled purple sprouting broccoli, while potted spreads, a West Country cheese board and – crucially – the Newt’s fermented-in-house “cyder” are all options. Local and London delivery is free.
£59 for two, ORDER NOW