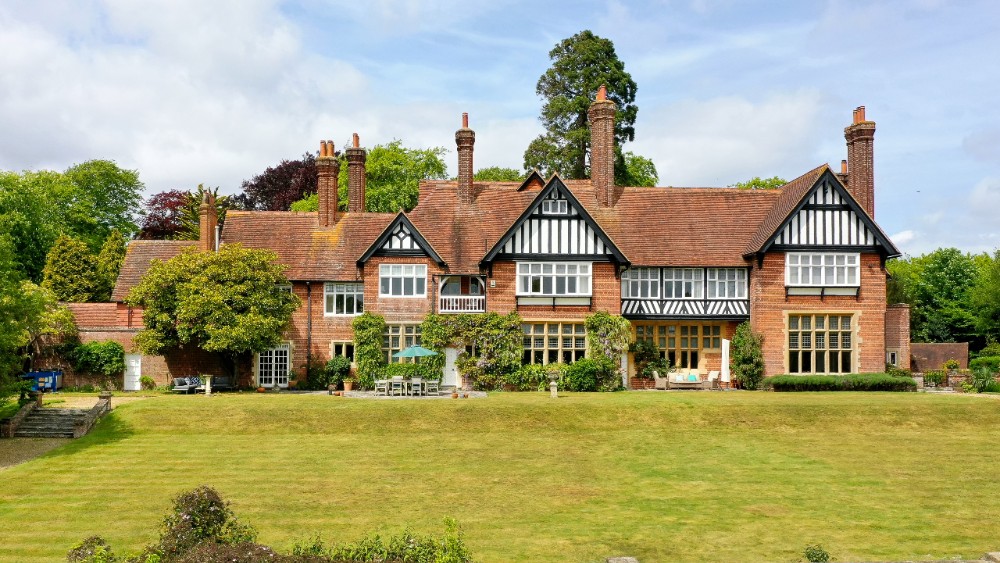 Live out your Bertie Wooster countryside fantasies (without the requisite aunt-dodging) with this sprawling £10 million estate. Located in Hampshire, the 24-acre property is considered one of the most important estates in the New Forest area thanks to a history that dates back to 1872. The home was built for a local landowner by renowned architect Richard Norman Shaw RA, one of the most influential British architects of the late-19th century who was known as a prominent figure in the English Domestic Revival Movement and the Arts and Crafts Movement.

Boldre Grange, as it is referred to, is one of the finest examples of the English style and reflects both of these movements. For example, the Arts and Crafts style is known for its asymmetrical composition, use of a variety of materials and high-quality craftsmanship, and this property has an asymmetrical facade, timber-framed gables, high chimneys, brick and mullioned windows.

One of the many living rooms  Strutt & Parker

There is a main residence and a very large cottage, and the grounds are filled with gardens. In total, there are  10 bedrooms, five bathrooms and six living rooms. The Grade II-listed historic home is drenched in sunlight, thanks to the high ceilings, windows and dramatic barrel ceilings, best seen in some bedrooms and the kitchen.

The foyer, which houses the original staircase  Strutt & Parker

There are also several terraces, an exceptional drawing room and a library, which is currently used as an office/study. You’ll host impressive gatherings in the original dining room with seating for 20 people. The formal dining room was formerly used as a butler’s parlour and has access to the cellars via a wooden staircase under a trapdoor. The cellars run under the majority of the house and include an original silver vault, a beer cellar and wine bins. The ground floor also has a lovely conservatory.

Many of the bedrooms, especially the primary suite, wouldn’t look out of place in a five-star hotel, with sumptuous drapery and a white-and-ivory colour palette that allows the greenery through the windows to take centre stage.

Outside, the original formal Victorian gardens include a raised enclosed terrace garden with a pond, yew walk, orchard, terrace and sweeping lawns filled with twisted willow and magnolia trees, grandiflora, pergola, Scotland pines and more. Thanks to the generous acreage and tall trees surrounding the estate, the property is exceptionally private and secluded.

Check out more photos of the property below

The home was originally built in 1872.  Strutt & Parker

A casual dining area off the kitchen  Strutt & Parker

Another living room with a fireplace  Strutt & Parker

The home is surrounded by the original formal Victorian gardens.  Strutt & Parker

Flowers within the garden.  Strutt & Parker

Beautiful archways are seen inside and outside of the homes.