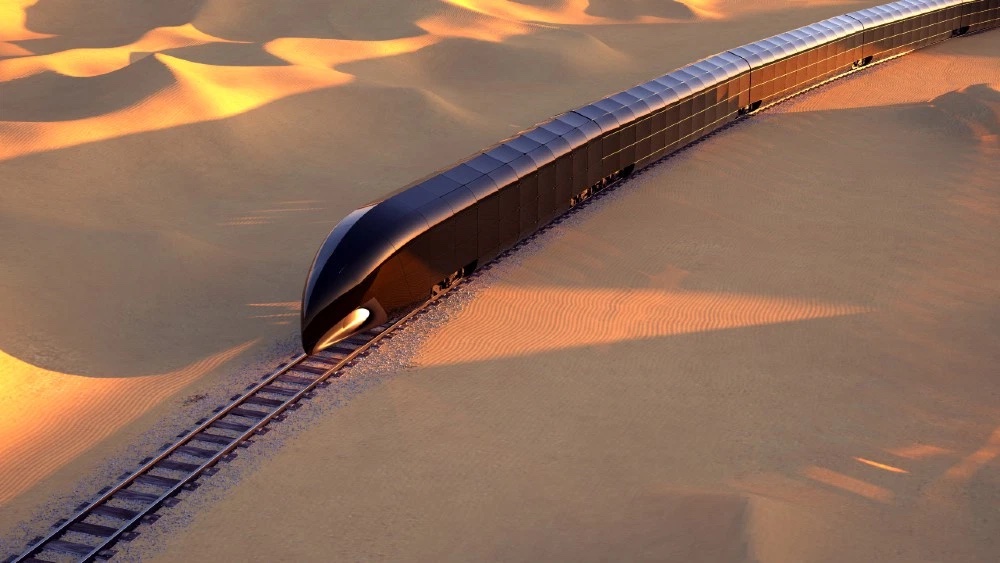 Famous trains like the Orient Express, Super Chief, and Flying Scotsman defined the luxury railway experience in the 20th century, but a new bespoke, smart train—with its all-glass exterior and golden hue—promises to reinvent travel by rail in a unique, 21st century way.

“We tend to think about rail transportation only in terms of speed, moving lots of people from point A to point B in record time,” says Paris-based designer Thierry Gaugain, who conceived the G Train. “But this 14-car train would belong to a single owner. It’s an alternative, very leisurely way to see the world, beyond the yacht and jet.”

Gaugain, a designer known for superyachts like Steve Jobs’ 262-foot Venus, the 394-foot Motor Yacht A and 492-foot Sailing Yacht A, started out as an industrial designer, creating products for Louis Vuitton and other fashion houses, and then moved to motorcycles and hotel interiors. He shifted to sailboats in the early 1990s and eventually designed his way into the top tier of the superyacht sector.

The all-glass exterior and fold-down terrace let owners stop along the tracks to admire the view. Courtesy Thierry Gaugain

Having loved trains since childhood, he views the G-Train as the “last way to say something new about travel, while focusing on luxury and technology.”

Certainly, it’s a radical concept for a type of mass transportation considered utilitarian, at best, and antiquated, at worst. Gaugain sees his G-Train as more than a $350 million toy, but as a way of exploring the world in a fresh way.

If the train is ever built, it’ll be a technical marvel: About 1,300 feet long, the exterior will be high-tech glass that can shift from being entirely transparent to opaque or even black. At night, the train will give off a golden hue as it barrels along the tracks at 100 mph.

The next-generation glass functions on more than the exterior, but reimagines the interior with different settings, shades of light or moods. Gaugain is obsessed with offering light in its many forms, viewing it as the way to enhance luxury.

With the push of a button, the owner and guests can fill the interior with seven types of scenery. “It might be winter outside, but the owner can suddenly be surrounded by a beautiful summer’s day with flowers and meadows,” says Gaugain. “The train is essentially a stage that the owner can configure in many ways.”

Over the last three years, Gaugain has put together a team—from Swiss custom train builder Stadler to French glass manufacturer Saint-Gobain, as well as UK engineering firm Eskerley O’Callaghan and railway operations specialists—to make the fantasy reality for anyone with a big enough chequebook.

Tired of winter? Push a button and the smart-glass interior turns into a summer garden. Courtesy Thierry Gaugain

“We had to ensure the feasibility of the project before we moved ahead,” he says, adding the train can travel across Europe and Asia, from Barcelona to Beijing, as well as North America.

The layout came from Gaugain’s history as a superyacht designer: The forward cars include a large owner’s suite, guest rooms for 18, gym and spa, dining car, and public areas that can accommodate everything from live theatre to art shows. The last car is the “toy chest,” says Gaugain, holding the owner’s collection of cars, motorcycles and off-road vehicles that allow exploration away from the train.

According to the designer, the G-Train is ultimately about riding the world’s rails in luxury, but seeing the surroundings in a new, very private way.

The G-Train’s nighttime golden hue is one of its many distinctive features. Courtesy Thierry Gaugain

“This would be for an owner who is crazy, but in a good way,” he says. “It allows greater access to many areas than a yacht, and would open a new chapter in the owner’s life. Really, it’s the consummate way to travel.”