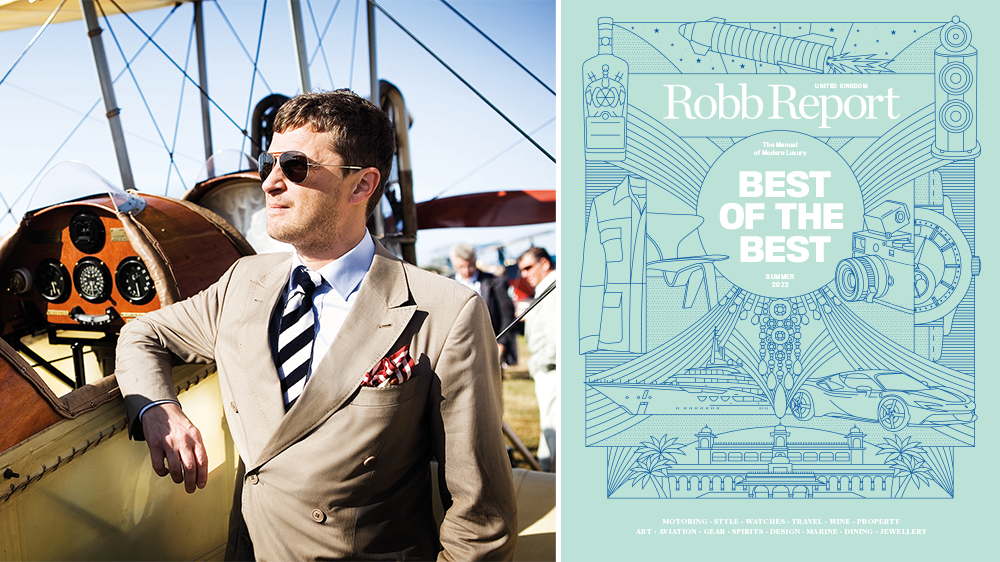 “Unparalleled”, “peerless”, “superlative”; “the bee’s knees”, “the cat’s whiskers”… or any other take on those Prohibition-era idioms that can be uttered in polite society…

However you choose to word it, decreeing something to be “the best” always risks dissent. It is, after all, a subjective call – how often does anyone glance over the track listing on a much-loved musician’s “Best Of ” album, nodding in agreement with every song that made the cut? Rarely, if ever. So cherry-picking the best of the best is a pretty audacious undertaking. It’s also a confoundingly tricky one. Not only
is there a gargantuan amount of “good” stuff out there in the luxury universe: the best keeps getting better – and in many cases exponentially.

Consider the Rimac Nevera hypercar, whose imperious profile graces pages 30 and 31. The year this century began, those partial to the scent of an oily rag were turning somersaults over a new vehicle, the Saleen S7, which could go from zero to 60 mph in a fraction under 3.5 seconds and went up to a maximum speed of 220 mph. The Nevera’s four electric motors propel it from stationary to 60 mph in a laws-of-physics-mocking 1.85 seconds and, should you floor it, soon reach 258 mph. Twenty-two years after the former was winning plaudits for setting records at the 24 Hours of Le Mans race, the latter is shaming the average F1 car’s relatively sluggish zero-to-60 figure of about 2.5 seconds.

There is other stuff in our Summer Best Of The Best issue – the contents of which you can see here over the coming fortnight – that would have been inconceivable as recently as two decades ago. These include Roche Bobois’s Corail dining table (3-D-printed, natch), the Lago Founders’ Frame (which displays your digital collectibles in as many different zany ways, including augmented reality, that currently exist) and the Vita Lion, a 35-foot electric boat that can whisk up to eight people across the waves in luxury, at a top speed of 40.2 mph. Its charge time? Just 58 minutes.

Other achievements celebrated on these pages required incremental steps of progress going back centuries. A fine example is the Audemars Piguet Selfwinding Flying Tourbillon Openworked watch found on page 69 – one of the more complicated of the long-anticipated flurry of watches released to commemorate the 50th anniversary of the brand-defining Royal Oak.

The milestones along this gem’s creative journey include the first skeleton timepiece, created in 1760 by André- Charles Caron; the realisation, by Abraham-Louis Perrelet, that an oscillating weight could be made to wind a watch without human intervention 10 or so years later; Abraham- Louis Breguet’s invention of the tourbillon around 30 years after that; and Alfred Helwig’s patent for an open-caged (or “flying”) version of Breguet’s masterstroke in 1920 — and that’s before we get to “the Picasso of Watches”, Gérald Genta, designing the first Royal Oak in 1972.

What unites the recipients of every award in this issue is that they elevate ingenuity to loftier summits than ever before – but what of the future? The engineers, aesthetes, artisans and other innovators who currently reside at the pinnacle of human achievement will be the first to admit that they’re standing on the shoulders of giants: whether belonging to horological luminaries from centuries past or R&D pioneers working for the finest automotive marques in more recent decades. As Robb Report Best Of The Best winners, they should be considered to be the giants on whose shoulders tomorrow’s luxury luminaries will stand.

Best Of The Best has been going strong for 34 years at our flagship US edition – it’s mind-boggling to consider what wonders will make the grade when the title reaches its 50th birthday.

Watch this space for our picks of the very best life has to offer, across 14 categories, over the coming days.