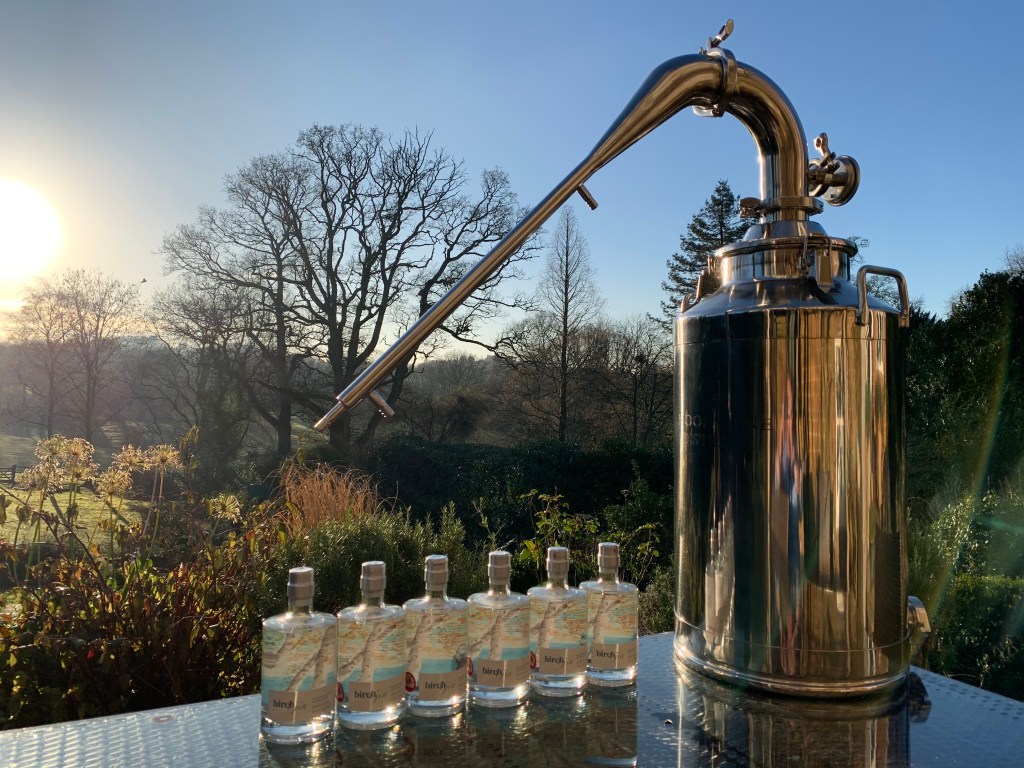 Quintessentially English as we tend to think of it, gin’s story begins with 17th century Dutch pharmacists discovering that juniper berries were perfect for masking the eye-wincing flavour of the medicinal barley malt wine they were administering to patients. It was William of Orange who brought ‘jenever’ over here, and an ardent British love affair with it was soon underway.

A few centuries on, a wealth of British craft distillers are now creating gins that are as deserving of the word ‘expression’ as any fine whisky. One of our favourites is Birch Gin (£35 for 50cl, buy now): a drop lovingly-made in Wadhurst, East Sussex, by Justin and Dawn Birch, using the increasingly rare one-shot distillation method (which sees the still run with the macerated botanicals already in the spirit). Justin spent a decade obsessing over his recipe, and the result is an enigmatic drink whose sweet-yet-spicy flavour profile is attributable to the addition of his eponymous Birch syrup to a range of ingredients including juniper, orange, lime, grapefruit, rosemary… and one secret one. 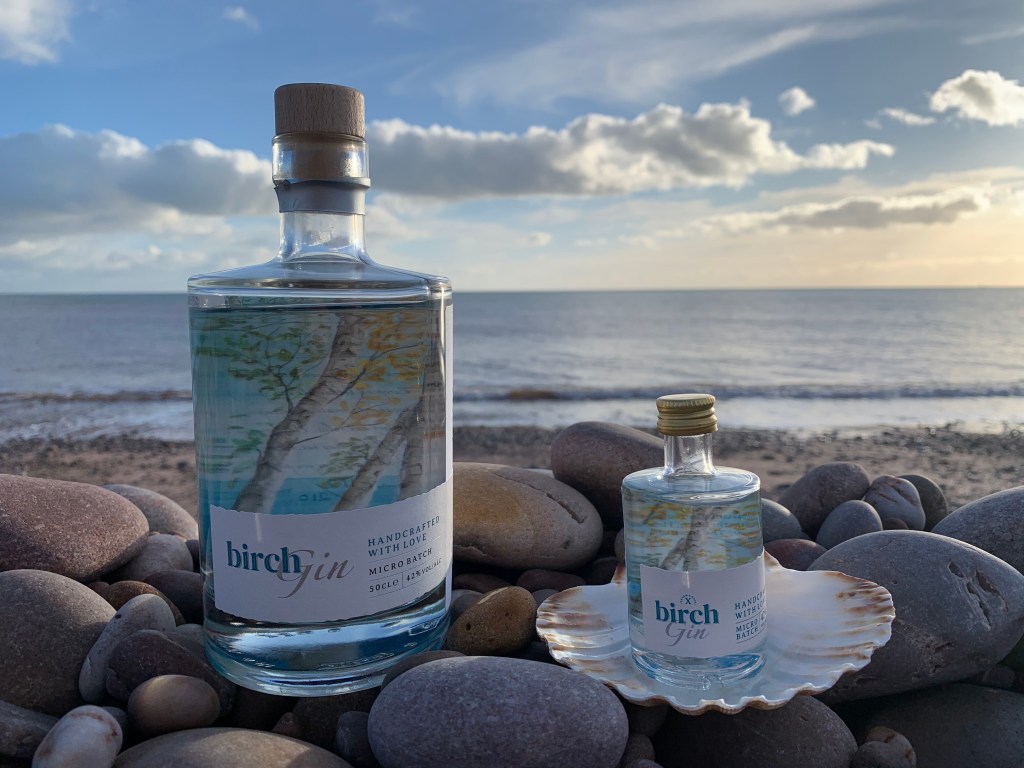 Just across the Kent border from Wadhurst in Tunbridge Wells is Atom Brands, the creative force behind Bathtub Gin (£25, buy now). Made using the Cold Compound process (whereby a base spirit is infused with botanicals then distilled in pot stills), this one features cinnamon, cardamom and cloves. The Gin Guide describes it, appositely, as being “creamy and warming, with spices such as cloves and cinnamon being well-balanced with bold juniper and citrus from the orange peel”. 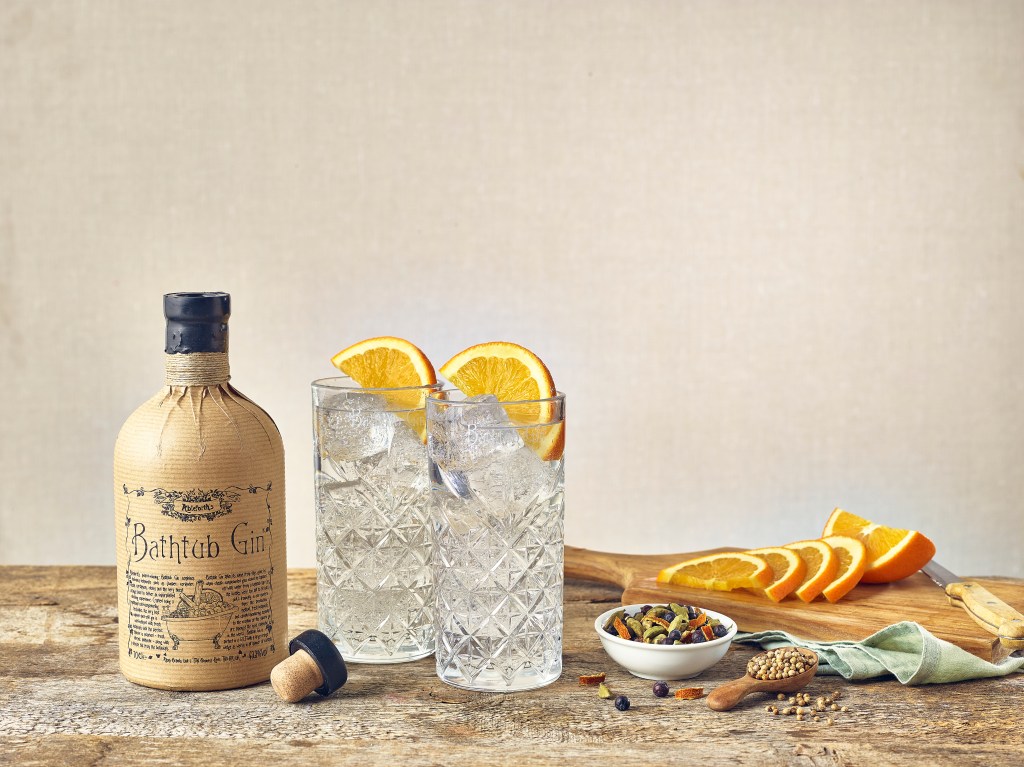 A lengthy drive south-west brings us to Salcombe, and the launch of ‘Daring’: (£75 for 50cl, buy now) the seventh limited-edition release in the award-winning Voyager Series and a collaboration between Salcombe Gin and Michelin-starred chef Paul Ainsworth. A celebration of one of Ainsworth’s signature dishes, A Tale of Porthilly, the gin is a culinary paean to the Cornish oyster, emulating its rich mouthfeel and umami-and-zinc taste profile.

“Celebrating the Cornish oyster, this simple dish provided the perfect inspiration for the gin, allowing us to push the boundaries of distillation, explore the use of some unusual botanicals and balance all the elements whilst making use of a by-product from the dairy farming,” says Angus Lugsdin, Co-Founder of Salcombe Distilling Co. 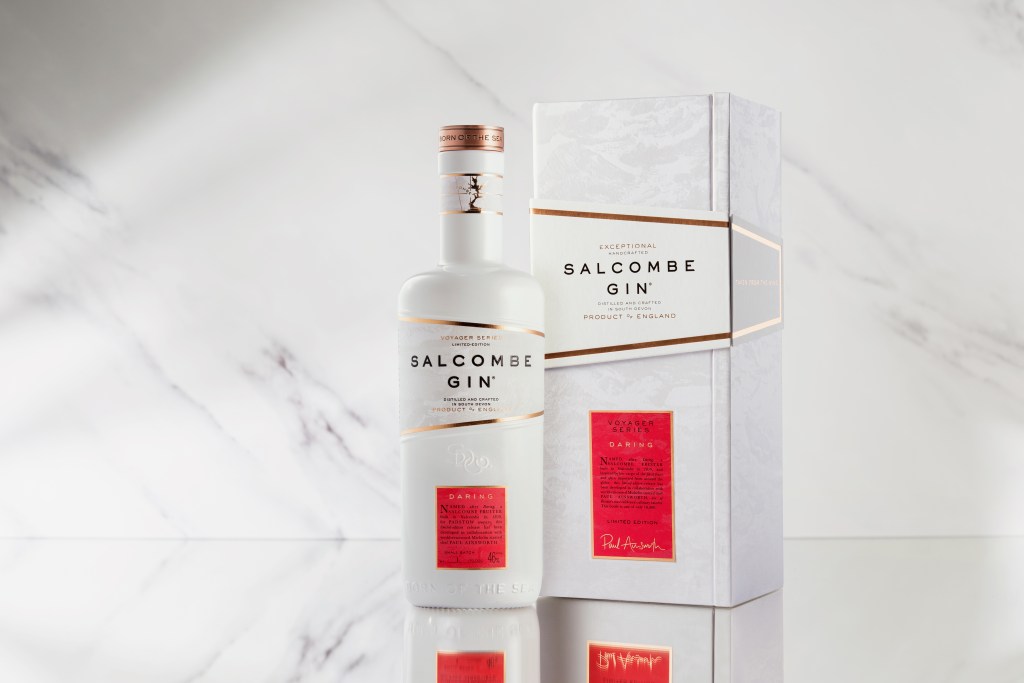 Another leap west now, to Penzance and a gin brand – one born of frustration over a poor-quality drop at a pub quiz – created by three friends from the village of Gulval. Penzance Gin (£38 for 70cvl, buy now) is now mixed and bottled by hand above a delicatessen in the centre of town. Their experimentation with the plethora of locally grown botanicals (gorse and juniper among them) has resulted in a smooth, warming drink  boasting a rich golden hue and a clarity across the palate. 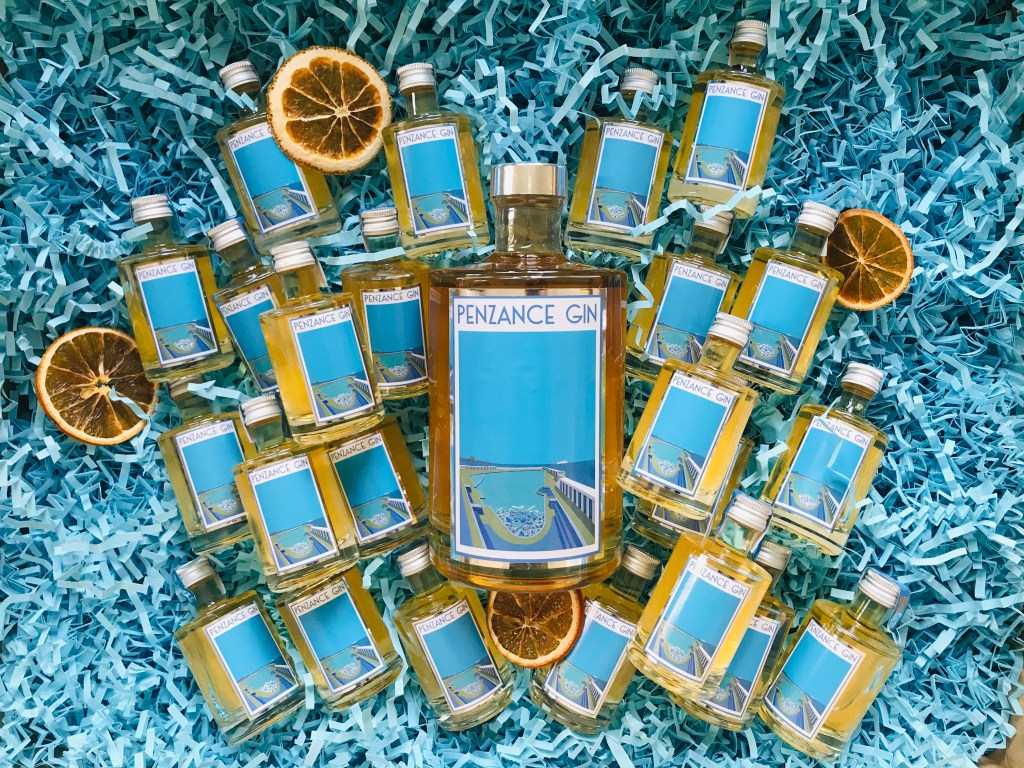 North as the crow flies from here, the gin tourist will find The Welsh Wind Distillery in Ceredigion, West Wales, which has finally created its “own brand” gin (£50 for 70cl in presentation box, buy now) having made a plethora of award-winning custom gins for other businesses. The taste concept is based on ingredients found in a traditional Welsh kitchen: oranges, cinnamon, clove, ginger, tea-soaked currants. The result is smooth and oil- rich, and replete with warm, sweet flavours. 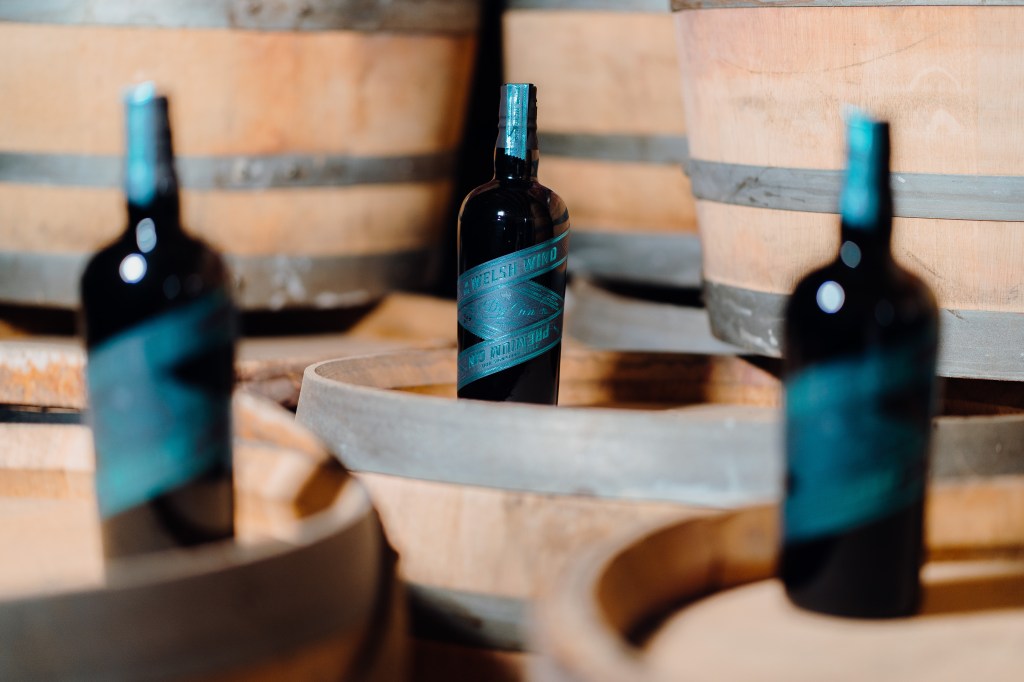 Merseyside-based Gin Brand Tappers, meanwhile, are partnering with celebrity chef and Sunday Brunch presenter Simon Rimmer to launch Tickled Pink (£40 for 700ml, buy now), a compounded gin in which Tappers’ signature botanicals have been bolstered by rose and hibiscus: a delicious alternative – one with curious echoes of Turkish delight – to the traditional Angostura bitters used to make a pink gin. “An all-natural rose hue reflects the traditional method of cold-compounding, lending a delicately sweet and floral flavour,” as Rimmer puts it. 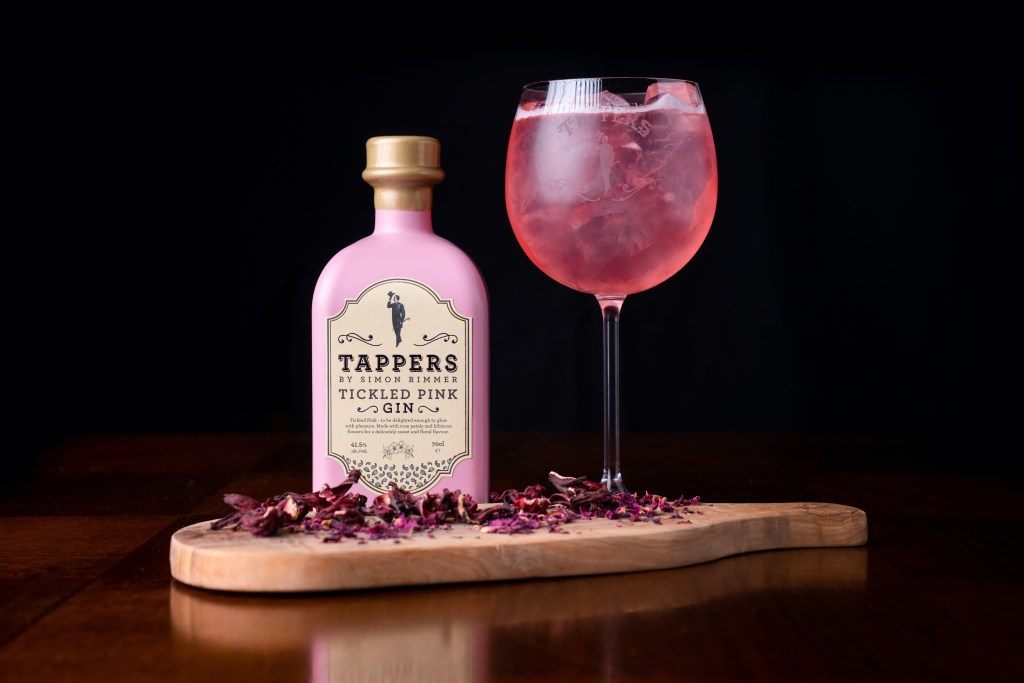 All the products mentioned above point towards a curious fact about gin: whilst many spirits’ names and identities are subject to all kind of conditions (scotch whisky must be matured in Scotland in a cask made of oak for at least three years and one day), with gin, all that’s mandatory is the inclusion of juniper. Which basically means distilleries can be as whimsical, as creative, as they like with other ingredients. Enter, stage left, Drinks By The Dram: a flavoured gin tasting set (£20 for five 15cl bottles) containing Jaffa Cake Gin, Bombay Bramble Gin, Four Pillars Bloody Shiraz Gin, Edinburgh Gin Rhubarb & Ginger Gin and Smoked Rosemary Gin from That Boutique-y Gin Company (who also do a wonderfully zesty Green Citrus Gin (£35). All taste far better, far more nuanced, than they should.

Connoisseurs need also not be snobby about gins not created in the UK: among the many excellent offerings from across The Pond is Few American Gin (£45 for 70cl, buy now), from a company hailing from Evanston, Illinois, which endured The Prohibition for over a century (the company name is a cheeky acronym of Frances Elizabeth Willard, a major temperance reformer). Made using un-aged Bourbon as a base, it drags vanilla sweetness and powerful juniper notes, along with top notes of lemon, across the palate.

Gin cleaned up its act long after William Hogarth, in his 1751 engraving ‘Gin Lane’, depicted scenes of soul-syphoned debauchery as part of a campaign against the unfettered production of cheap plonk. The meticulously crafted selection here, though, testifies to its recent elevation above and beyond being a respectable middle-class tipple in the Eighties. It’s now in a realm where it truly deserves the epithet, “premium”. Rick Stein Returns to The Goring for A Taste of Cornwall