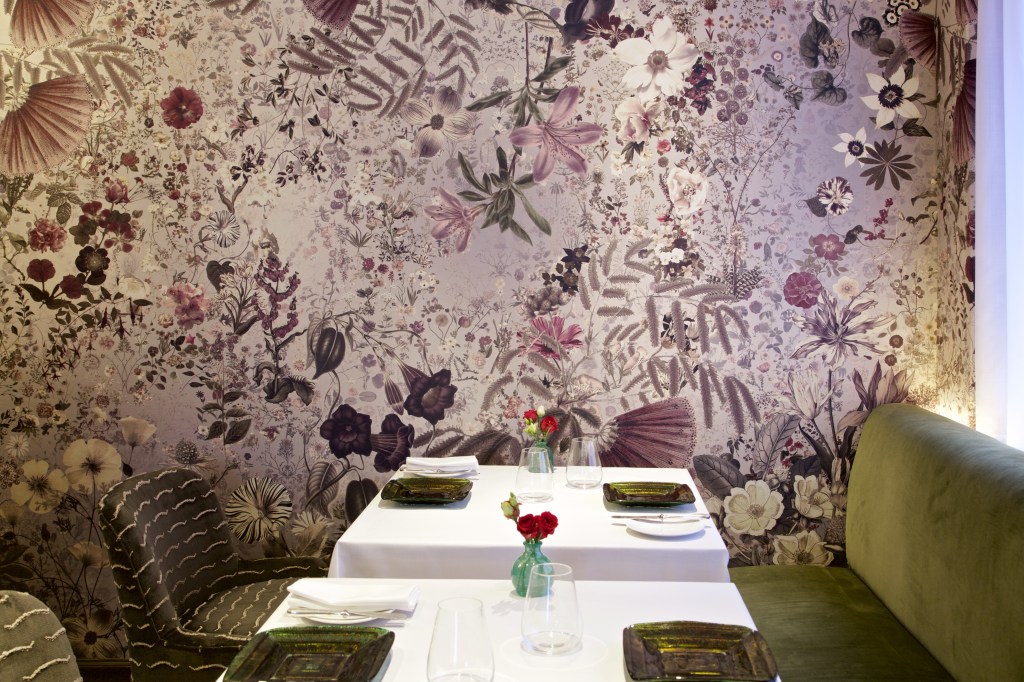 If you’re one of the thousands of people who intermittently stretch their normally swivel chair-confined legs by sauntering the streets between Pall Mall and Piccadilly on a weekday, your eye will at some point have been drawn towards the striking red and white, wedding-cake-esque Victorian-townhouse façade of St. James’s Hotel and Club on Park Place: a congenial bolthole which is replete with the kind of cosy, sumptuous charm that characterises this neighbourhood. An overnighter there, next time you have theatre tickets or a meal with friends in town, is heartily recommended.

Arguably the establishment’s main draw, though, is to be found on the ground floor: Seven Park Place, a restaurant which was awarded its first Michelin star just a year after opening a decade ago (it now has four AA Rosettes too), in tribute to the extraordinary knack for Anglo-French fusion which made the name of the man presiding over it, one William Drabble: an executive chef who was trained by Tom Aikens and Phillip Britten, among others, before taking over from Gordon Ramsay as head chef at Aubergine. 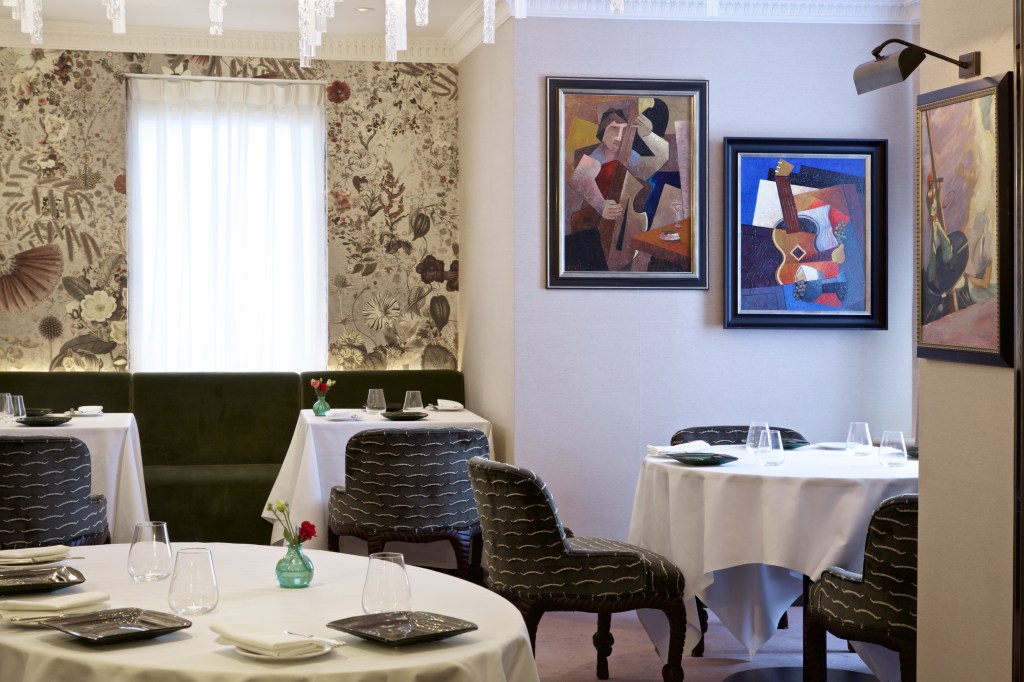 It’s clearly a positive sign when a restaurant opts for a revamp just a year after winning a major gong (in this case Europe’s Luxury Hotel Restaurant and Europe’s Best Wine Selection at the 2018 World Luxury Restaurant Awards), and with its interiors still looking pretty impervious to the ravages of time and trend. In this instance, Seven Park Place’s refusal to sit on its laurels has reaped dividends.

The rethink of the whole space was carried out by Russell Sage Studio with one eye on the Art Deco period. Think olive green seats; elegant chandeliers and tubular lighting hanging from the ceiling and affording the space a congenial, evening-feel glow; elaborately flower-patterned wallpaper juxtaposed with entire walls that are plain except for artworks, chosen in adherence to the broader tastes of the hotel, whose Rosenstein Collection consists of 450 20th-century works, from Bauhaus to modern via Expressionist and Cubist. 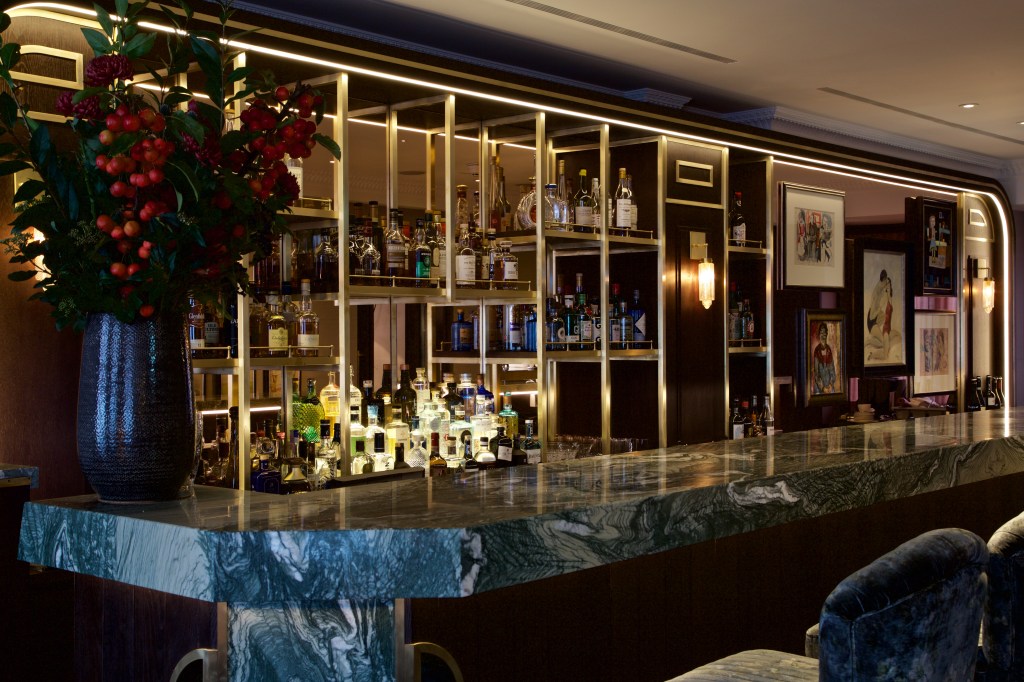 A heady reminder of Drabble’s inimitably hedonistic approach to cuisine – English ingredients, prepared with more than a soupcon of gallic flare – came almost instantly we were seated, in the form of a white mushroom with truffle cream amuse bouche which caused all diners whose taste buds came into contact with it to look around the room in incredulous wonder. The flavours and textures elsewhere followed suit – with an extra layer of harmony afforded by the perspicacity of sommelier Brent Bartlett.

Accompanying each tender fork-full of the grilled south-coast line-caught fillet of seabass was a sip of 2015 Basadone Verduno from Piedmont – a thin-skinned pelt-coloured grape variety with a mid- palette savoury character and red fruit notes, whose mild spiciness tossed the gauntlet gently in the direction of punchy flavours afforded by the dish’s braised Jerusalem artichokes in red wine parsley puree. 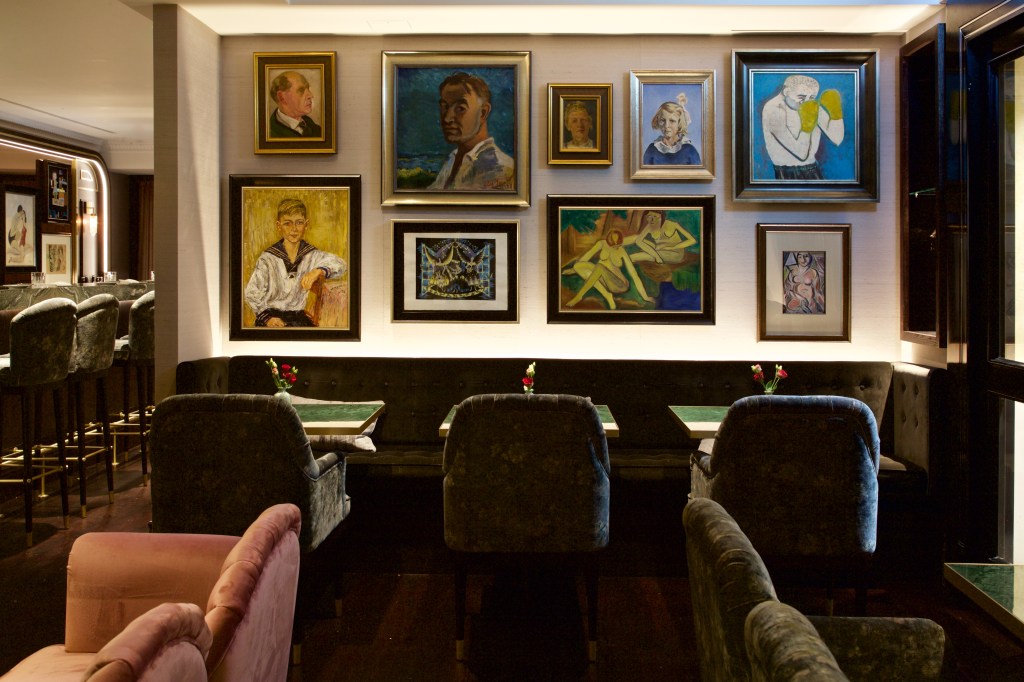 To complement the roast saddle and braised haunch of venison with confit celeriac and chestnut juniper jus, a bottle of 2016 Barbera d’Alba Superiore, also from Piedmont – three or four years in the bottle, fuller on the nose and on the palette with dark cherry notes easing into tertiary notes of forest floor, tobacco and leather – was brought to the table; the sea salty notes with a hint of oyster-shell provided by the scallops with salsify puree, champagne sauce and oscietra caviar was given more profound expression thanks to a  drop of 2016 Gruner Veltliner Strass from Austria, while the floral and exotic fruit notes that the apple and vadouvan leant to the galette of slow-cooked pork with butter-poached langoustines was cut through with a citrusy zine by a 2016 Riesling from Weingut Fritz Haag, Germany.

If you’re only planning the single visit, our advice is to plump for the seven-course gourmand menu with paired premium wines. And then instantly change your mind about it being a single visit.