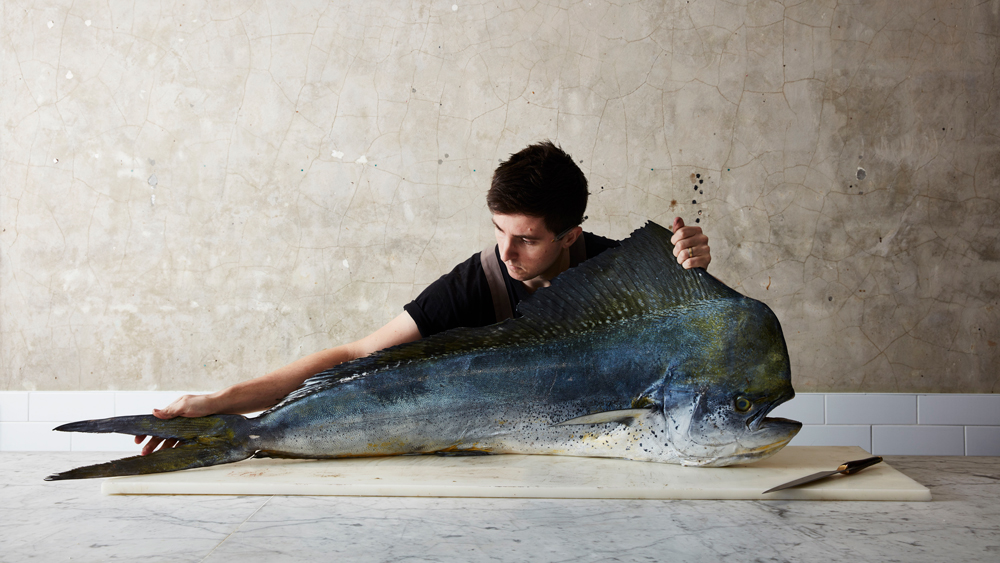 When you sit down at Saint Peter, chef Josh Niland may hand you a fish’s eyeball. More surprising yet, you’ll gladly eat it. “Eyes are sludgy, and stringy and gross, and like what the fuck do you do with it?” Niland says. “If I poach it for a Japanese audience, they’ll love it. But how do I make this delicious for a Western palate?” At his 34-seat seafood restaurant in Sydney, Australia he’s searched for how to make eyeballs and all the other nasty bits delicious. In the process, the 30-year-old has turned himself into one of the most innovative seafood chefs in Australia. And now he’s ready to spread the message around the world.

Niland’s desire to cook began at a time when he’d actually lost the ability to taste much of anything at all. Two days shy of his eighth birthday, he was diagnosed with a Wilms tumor—a malignant growth on his kidney the size of a baby’s head. After surgeons removed his kidney, it took nearly two years of chemotherapy and radiation to rid him of cancer. The treatment left him home from school regularly and he needed to pass the time. “I used to read a lot of cookbooks and magazines and watch TV cooking shows,” Niland says. His sense of taste returned and with what he learned from Curtis Stone and more, he started cooking for his parents. He felt he’d found his vocation.

At 14, he got his first job in a restaurant in his hometown of Maitland, washing dishes and making coffee at a café. By 17, he’d kickstarted his career 100 miles south in Sydney, working at restaurants big and small before heading to Europe to build his skillset further. He landed in the test kitchen of revolutionary Michelin three-star restaurant The Fat Duck in Bray.

In his four months with Heston Blumenthal’s team, precision and self-confidence came through tedium. “I’d cook with chocolate for a whole month and then with eggs for a whole month. He’s got a list of egg temperatures from 35 C to 85 C and you’ve poached eggs at every one of those temperatures,” Niland says. “It was a great way to learn.”

He’d come to marry that precision with vital lessons imparted at chef Steve Hodges’ famed Sydney seafood restaurant Fish Face. Gutting the fresh catch every day, he saw that focussing only on the filet and ditching all the organs meant throwing away a lot of tasty, if odd, ingredients. The potential for turning waste into dishes people wanted to eat stuck in his mind.

With his wife Julie, they ventured out on their own to open Saint Peter in 2016. Because they lost their investor at the 11th hour and had to self-fund, they operated lean. Necessity bred creativity. A typical seafood restaurant may throw away up to 55 percent of a fish. He wanted to make sperm sacks,swim bladders, livers, appetising. Blood became blood pudding. Bones were turned into powders that improve the flavour of fish stock. Fish oil was the base of caramel. And the eyeballs? Blended with tapioca and then fried to make a delicious, salty chip.

He was taking sustainability past some boring, abstract concept and turning it into something delicious and good for the bottom line. His approach helped allay concerns over staffing up to handle the workload. After he hired more cooks, “the wage cost just went through the roof and I was just so scared”, Niland says. “Then I noticed, though, that when the wage cost ballooned up, the food cost dropped dramatically, because we had started to handle more of the byproduct of the fish”. And when he told people he now used 90 percent of the whole fish instead of 45 percent, he caught the attention of the eco-conscious and the business-minded alike.

Coaxing deliciousness from seafood went beyond cooking fish livers well. He brought an experimental streak to Saint Peter, looking at fish in a new way. He started dry aging like he was making charcuterie and cooking fish very gently underneath a heat lamp that was originally designed to merely keep food warm (chefs and diners could follow those adventures through the #spheatlamp hashtag on Instagram). He spread his message to cooks half a world away through his Instagram, which has amassed nearly 100,000 followers. And when chefs like Jamie Oliver visited Sydney, they were blown away by the creativity of this very young talent.

This is what Niland does with an eyeball. Photo: courtesy Rob Palmer

With his years of experience and goodwill from his peers behind him, he has released The Whole Fish Cookbook this month to spread his seafood manifesto to the wider public. With the book, Saint Peter and the fish butcher shop he opened next door, he’s hoping to expand people’s minds even more to the possibilities of seafood. And after this, he’s looking to go even bigger with his next restaurant. He’d create a steakhouse of fish where it’d be classic sides, a larger space and a deeper wine list, but instead of beef, it would be impressive slabs of fish.

“I’m trying to diversify the fish that everybody wants to put in their table,” Niland says. “And I want to explain it to people that there’s far more to a fish than just the filet.”