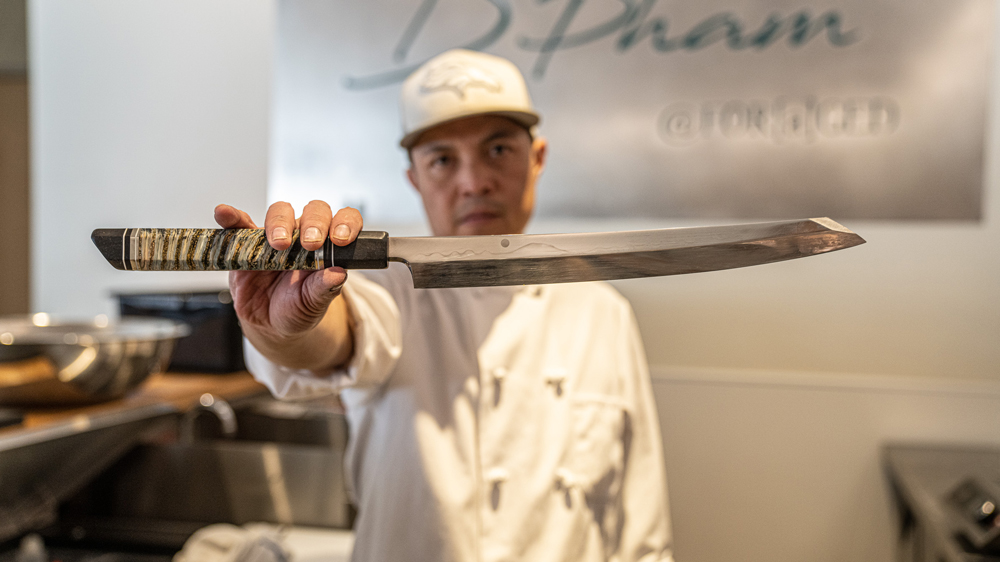 Like many chefs, Duy Pham is fastidious about his knives, one of the most important tools in the kitchen. So when one of his knife handles broke a few years ago, he took it to a local repair shop in Denver.

When he learned what it would cost—about £117 for a seemingly simple fix—he was surprised. And because Pham is inquisitive and loves to stay insanely busy, keeping up various hobbies while running a restaurant, he headed straight to the hardware store to instead buy hundreds of dollars worth of equipment to teach himself how to make a new handle.

That impromptu decision set in motion what’s now more of an obsession for 45-year-old Pham, who has become such an accomplished knife-maker that he gets commissions from chefs and collectors all over the world.

His craft also serves as the inspiration for Foraged, a new Denver restaurant now open in The Dairy Block, a repurposed 1920s dairy facility in the LoDo neighborhood.

The name—a combination of the words “forage” and “forge” written as “Fora[a]ged” in the logo—is a nod to Pham’s knives, which are on display throughout the space, as well as the restaurant’s commitment to sourcing only the best ingredients.

“I’m just one of those people who are very picky about things and I always want an edge,” Pham says. “I want something that will make me better. I want to know why it is better. It takes a certain personality to pursue that. A lot of people have that personality, but not a lot of them are chefs.”

His knives are high-end, ranging in price from roughly £230 up to around £800 and beyond, and he often makes the handles with exotic and unexpected materials—rare Mizunara oak from Japanese whiskey barrels, meteorites, antlers and even glow-in-the-dark material, just to name a few.

Depending on the situation, Pham will make the entire knife, forging the blade from ultra-strong Hitachi carbon steel then creating a custom handle. Other times, chefs and collectors will send him an existing knife and he’ll repair or design a handle to better fit their needs.

Pham has worked all over Denver (with a few stints in other parts of the country), at restaurants specialising in everything from classic French cuisine to sushi. He turned heads by becoming an executive chef at the age of 22, then opening several of his own restaurants in Colorado.

More recently, Pham teamed up with Brent Walker and Meghan Gold in 2014 to open Parker Garage, a chef-driven restaurant in a historic building in downtown Parker, a southeastern Denver suburb near the Denver Broncos’ training facility.

In November, the trio opened Foraged, with a large, airy seating area on the main floor and an intimate raw bar on the upstairs mezzanine, where Pham does omakase chefs tastings (he now splits his time between the two restaurants and his knife-making workshop).

The bar at Foraged features more than 100 types of whiskey and scotch, as well as exclusive custom wines made by winemaker Jesse Katz of Devil Proof Vineyards. On the menu, you’ll find traditional dishes with a playful spin—Moroccan-style duck with couscous, duck sausage and Meyer lemon aioli or mushroom Wellington with goat cheese and black garlic puree, for example.

“The food is very grounded in the way of tradition and technique, but using more modern ingredients and plating and style,” said Pham. “When I add a different ingredient to something very traditional, I think about doing it subtly and not to where it’s just outrageous.”

Walker and Gold are two of Pham’s biggest supporters, wholeheartedly encouraging him to pursue his other interests so he doesn’t burn out in the kitchen. They helped Pham train under Murray Carter, a 17th-generation Yoshimoto bladesmith and a well-known figure in the world of knives, as well as Matt DeLosso, an accomplished custom handle-maker.

“I was getting away from my passion for cooking,” Pham says. “I’ve been cooking for so long, 30 years now, and it was wearing on me a little bit. But when I got done with [these knife courses], I was excited about cooking. I couldn’t wait to cook. It was like I was a kid again. It’s a nice balance between making knives and using them in the kitchen.”

Not only has knife-making reinvigorated Pham’s love of cooking, but it’s also introduced him to people all over the world. He’s sold knives to a chef in Vietnam who sent him hard-to-get ingredients like dry squid, fire ant salt and jungle berries in return, for example.

His knives also appeal to collectors and home chefs who simply admire the artistry and craftsmanship of his work.

“His handle work is just unbelievable,” said Robert Rowell, a retired geologist living in New Orleans. “I like Duy’s style and his eye as far as the colours and the materials. The handles are just absolutely stunning.”

Pham has also made dozens of custom knives for chef Qui Tran, who owns three restaurants in St. Louis. Since forming a long-distance friendship that started over Instagram, they’ve worked together to create knives that fit perfectly into Tran’s hands, customising the diameter, length, slant and thickness.

Of course, Tran could use less expensive, off-the-shelf knives in his restaurants. But he likened it to any other hobby or obsession—Pham’s knives are just better.

“It’s just one of those things where you take pride in what you do and it looks cool and it feels good,” said Tran. “It’s like you pimp out your SUV—you can have a regular Jeep Wrangler or you see these guys with all this custom stuff.”