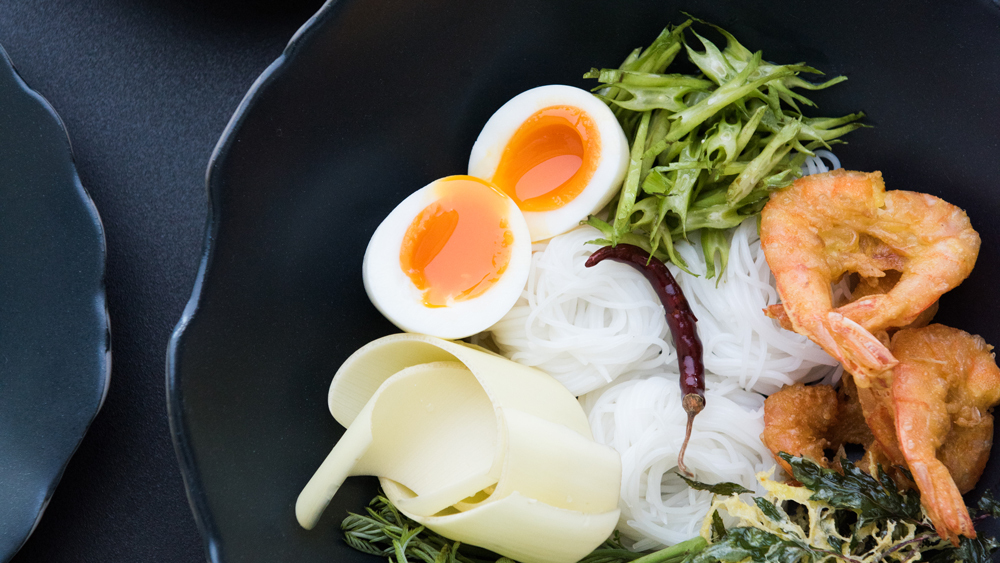 Bangkok-born chef Pim Techamuanvivit gave up a high-flying career as a cognitive scientist in Silicon Valley to open San Francisco restaurant Kin Khao and was awarded a Michelin star within just a year for its “authentically layered, fiery Thai flavour with a produce-driven northern California flair.”

She recently opened a second San Francisco restaurant called Nari, meaning “women” in Thai, to further critical and public acclaim, while she is also executive chef of Nahm at the COMO Metropolitan Bangkok. It’s home to her “heritage Thai cuisine” and was recently again awarded a Michelin star and also retained its place amongst Asia’s 50 Best Restaurants.

Splitting her time between San Francisco and Bangkok allows her to indulge her love for street food and local eats in the Thai capital. Here are the places she recommends to people visiting her hometown.

Normally the first thing I do when I Iand in Bangkok is go to a market for breakfast, usually Sam Yan market by the university. Near it is a Chinese congee (rice porridge) place called Joke Sam Yan.

It’s very simple with just a couple of different variations, either with pork balls, offal or eggs that come raw, poached or as preserved “thousand year” egg. My order is congee with pork liver and raw egg. The porridge is molten so it pretty much cooks the egg and it comes with ginger, cilantro and green onion. The trick is, before you hit it, there’s a Chinese fried dough place next door where I’ll buy five (or even ten pieces if I’m ravenous) and some condensed milk that I dip them in while I wait for the congee.

My second breakfast is good coffee—it’s so important to me. I go to Roots on Sathorn Road, sometimes on a Segway I bought to avoid the notorious traffic. I get a flat white and usually pay for two—they know to make one for me and then make the second when I look at them.

Lunch is usually one of two noodle shops. One is a tiny stall called New Yuen Yong in Chinatown near my ceramicist studio who makes plates for me at Nahm. They’ve been around maybe 60 years and their noodles come with Chinese fish balls, squid or shrimp balls. The fish balls actually taste like fish, not the emulsified strangeness where you sometimes ask yourself what the original protein is.

They have a really nice texture and the broth is great, while I order the special egg noodles with extra everything. The noodle comes unseasoned so you have to add your own, so I have a little bit of sugar, vinegar with chilli, dried chilli, light soy and fish sauce, making it spicy, a little acidic with a smidgen of sweet. I have it dry but ask for the broth on the side, so when I’ve finished eating it you drink the amazing broth made from chicken and fish bones with a little touch of fried garlic oil, white pepper and Chinese celery. Don’t forget to order the crispy fish skin too.

The other place is a boat noodles shop called Thong Smith at Central Embassy. It’s a little bougie but really good. They do beef balls with a little bit of blood in the broth. It’s a little dodgy sometimes to go to a stall on the street when your order has blood and spices so it’s great that this shop put it in a super clean space. They use really good meat and the broth is super tasty. Most people eat the thin rice noodle but I like the vermicelli that is really thin angel hair. You can choose your level of spice—one to three—but even medium can be strong. I’d suggest you go for one because you could always add chilli but it’s really difficult to take it out! It’s animalistic, full or iron and needs that heat. They even have fancy wagyu meat, but their regular meat is really good too—and fried wontons are a great snack while you’re waiting for your noodles.

This restaurant in Sukhumvit does great southern Thai food. They’re not super busy which is great because I can get in all the time, but they should be busier than they are. Most of the time it’s just the chef with one or two assistants and then his wife runs the front  of house. He’s from Chumphon (In southern Thailand) and most of the ingredients come from there, so it’s a particular type of food which is different than, for example, Phuket-style. It’s rip your face off spicy, where you cry a bit and then go back for more. It’s quite a small place, a little bit hard to find, but definitely worth it. His sour curry is really good, southern style, really spicy and sour with fish usually from Chumphon. Also stinky beans stir fried with prawns and shrimp paste that he makes into a relish. He also does a really homey dish, caramelised pork belly with egg soup.

A lot of times when I’m cooking all day and eating Thai food all the time I have nights when I cannot look at another thing with fish sauce or shrimp paste! So I go to La Casa Nostra for a really simple plate of pasta from chef Nino [Scognamillo]. He is Italian and they have a fabulous wine cellar to where you can buy it retail or drink it there, while they also have a Coravin for really good wine by the glass. I may have their simple but delicious olio e aglio pasta, a plate of some good charcuterie and a nice salad.